You are here: Home » Blogs » A Philadelphia Solution to California's Housing Woes

As this week’s DNC guests are discovering, Philadelphia is no San Francisco. It's not New York, Boston, or D.C. either. It’s not even Cleveland. But delegates who are stuck in traffic getting out of the Wells Fargo Center would do well to take a peek down the side streets as they drive up Broad Street to their hotels and discover some of the delights of the host city.

That goes double for the California delegation.

Most Californians have probably never seen a rowhouse. For the uninitiated, they are a form of townhouse (or terrace house in Europe), two or three stories, often with basements. They share side walls with their neighbors. Rear overlook face small yards or patios, and front walls face the street. They’re taller than they are wide, and they’re about as deep as they are tall.

They basically look like boxes of instant oatmeal aligned on a grocery shelf.

Rowhouses superficially resemble typologies like Brooklyn brownstones and San Francisco Victorians, insofar as they too are packed tightly and share side walls. But the beauty of true rowhouses  is that they have none of the trappings of those fancier cousins. No gingerbread flourishes or imposing stoops, and no dumbwaiters or maid’s quarters. 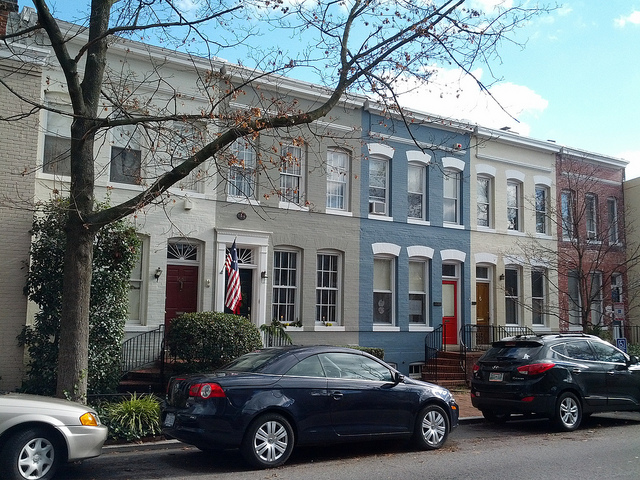 They are blue-collar shelters that came of age when East Coast cities were industrial powerhouses. Workers made decent wages — enough to enable them to escape from tenements, but not enough to move into anything fancy. Rowhouses typically have flat brick facades, occasional details like cornices or porches, and an utterly functional design. They are the Model T of urban shelter. Unlike a 100-year old car, though, those 100-year old houses still run just fine.

While rowhouses are popular throughout the East Coast, particularly in Baltimore, Washington, D.C., Virginia Beach, and parts of New York City, Philadelphia probably has more of them than any other city in the world. It has row upon row of rowhouses.

As California cities agonize over how to house everyone, they are missing out on a typology with countless reasons to recommend it. Fundamentally, no typology so exquisitely balances the urban virtue of efficiency with the American virtue of individualism.

Efficiency lies in the massing and use of space. Even two-story versions have floor-to-area ratios greater than 1. Shared walls mean that blocks are compact (and that heat dissipates slowly in the winter). A block that houses ten families in tract homes homes can house 100 in rowhouses.

Unlike typical multifamily units, every rowhouse comes with its own address, advertising themselves as “home” to the people who live there. Rowhouses dispense with the gratuitousness of front yards, but their exteriors can express as much individualism as any lawn or feat of topiary. Some rowhouse residents plant tubs of flowers or even vegetables that put any lawn to shame. Some paint their shutters, doors, and other trim in imaginative colors. Some paint their entire facades. Others let their facades stand unadorned, in quiet conformity with their neighbors.

Suburban residents might protest that families need four walls to call their own and a freestanding structure to fawn over. Families in New York City and Los Angeles, among others, counter that two walls are better than zero. That’s essentially what you get in the multifamily dingbats and mid-rises of L.A., the mini-resorts of San Diego, and the walkups and high-rises of New York.

Rowhouses promote a special kind of urbanism. The chance to walk out your front door and step immediately on to a sidewalk — in view of every other house on the block — creates a neighborliness that no apartment building ever could. Just like in the suburbs, residents are associated with their buildings and buildings with their residents. But rowhouse neighbors aren’t just fuzzy dots that scramble from front doors and into SUVs. Residents live close enough to be recognizable, but not so close that they feel obligated to each other. In very poor neighborhoods – of which there are too many in Philadelphia – squalor is contained on a house-by-house basis. It does not consume entire apartment buildings as it can in places like high-rise public housing complexes.

Far from being monotonous or oppressive with their continuous facades and uniform roof heights, rowhouse streets are cozy — European, even. Streets are well framed and often lively, with subtle design flourishes that appeal to pedestrians, not to speeding drivers. There are no curb cuts to mar the sidewalks. There few streetscapes as pleasant as a rowhouse street with a canopy of mature trees.

Appropriately, in the city where the United States liberated itself from England, rowhouses liberate their owners from another form of tyranny and taxation: homeowners associations. Rowhouses confer all the communal benefits of condominium living with none of the expense of HOA dues or headaches of creating and conforming with HOA regulations. Of course, if your roof leaks, you have to fix it yourself.

If entire East Coast cities are built on rowhouses, why does California have, essentially, zero? Surely culture is one reason. City founders in California weren’t about to emulate the tired, oppressive old East Coast. But those attitudes are changing. Many California cities are embracing density. Rowhouses might be perfect for low-density urban neighborhoods that really should be medium density.

Except for those darn regulations.

Rowhouses are basically what you get when a city wants to provide single-family homes and goes full-on libertarian. If you get rid of setback requirements, floor-to-area ratio maximums, buffer zones between structures, and height restrictions, you almost inevitably end up with rowhouses. California isn't quite there yet.

You need one more thing: no parking requirements.

When you live side-by-side in houses no wider than a car is long, there’s no room for a garage (unless you have generous alleyways). There’s also little need for a car. Rowhouse neighborhoods are generally dense enough to maximize the use of public transit. and because they’re dense, they’re usually not afraid of neighborhood-serving commercial, like restaurants, bars, and convenience stores. So they’re walkable and bikeable. If rail transit is nearby, so much the better.

For all the fleeting political proclamations that are likely to come out of Philadelphia this week, we also know that the city is capable of spawning universal, enduring institutions. We could do worse than to add a certain modest, functional, and efficient housing type to that list.

Goodness knows, we all could use some modesty these days.