You are here: Home » Blogs » Tim Draper Will Yet Solve California's Problems!

Oh darn you, California Supreme Court, darn you, darn you! You have disqualified from the November ballot Tim Draper’s proposal to chop California into three new little state-lets. In doing so, you wicked, wicked justices, you have taken away from us a chief source of amusement for the coming fall political season. The hungry children of political satirists are pressing their noses to the front window, wondering if Daddy found anything funny to write about today.

This year, Tim Draper, a Silicon Valley billionaire and Bitcoin investor, returned for a second stab at California, following his ill-received 2016 proposal to cut California into six parts for the purpose of … I forget. Doesn’t matter: Billionaires always have the best ideas because money = success = happiness. We should be grateful for the wisdom they share with us, even on subjects about which they are largely uninformed.

Draper's proposal to chop up California three ways this year obtained enough signatures to appear on the November ballot before running into that archaic, non-VC-funded, non-innovative institution known as the California Supreme Court. Ruling on Wednesday, the court struck down Draper's ballot measure on the grounds that it promised do to more harm than good. No fun! The entertainment value would be worth the epic cost of carving the Golden State into Vermonts and Idahoes

(Draper, who spent $1.2 million promoting the measure, amusingly referred to the unanimous decision as "corruption," as if every single justice was being paid off by the One California Movement, which of course does not exist, being unnecessary.)

“Assuredly, the indefatigable Mr. Draper will be back with further proposals along similar lines. (Alas! Would that Kevin Starr were still with us, to write “Butchering the Dream,” the authorized biography of Tim Draper.) Safe in the expectation that the imaginative billionaire and his fellow Golden State Miniaturists will always be with us, let’s us examine his proposal.

Draper follows the best traditions of Silicon Valley: he has found a solution for a problem that does not exist. Was it a problem for you not to be able to adjust your air conditioner with the sound of your voice alone? Did your arms and legs atrophy from binge-watching Game of Thrones? With the mere sound of your snarl, Alexa can turn your porch lights on-plink!- as if by magic. It makes you wish you had more imaginary problems, so you can buy more cool stuff.

His billions aside, I think Mr. Draper missed his true calling, which is to be a butcher. He wants to take a keen knife to this state with its mountains, deserts, wineries, app factories and 1,000 miles of coast line. To understand the Draper idea properly, refer to Figure 1, the familiar chart on how a cow is dismantled for your dinner. 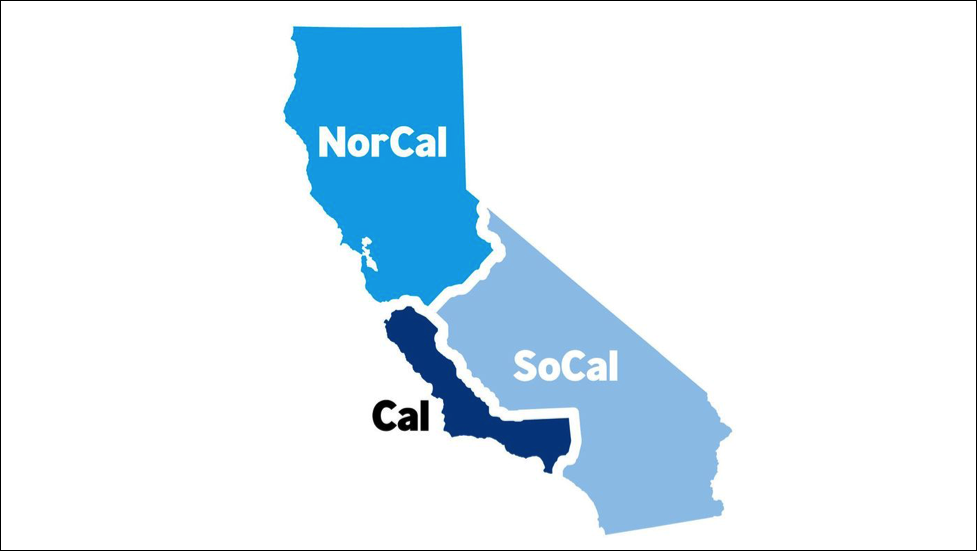 In a similar spirit, the map of Draperland would have divided the state into three pieces: “NorCal” gets the chuck, brisket and loin, while “SoCal” would end up with sirloin, tenderloin and round. A third entity, the wee state of Cal, gets the short ribs, plate and flank. When you look at ThreeCAs that way, it makes perfect sense. Otherwise, not so much.

What is the advantage of what Mr. Draper calls ThreeCAs? (That’s one word, for marketing reasons.) “ThreeCAs will give Californians better education, better infrastructure and lower taxes,” he said in a statement when launching the campaign last year, with absolutely no evidence for any of those assertions. “Three new state governments will be able to start fresh, to innovate and better serve their people.”

Please notice the trope that innovation = better service to people. Yes, governance is always best starting out as a tabula rasa. That leads to innovation, which is a good thing, isn’t it? Except when innovation leads to bad things, such as the State of Alabama trying to formulate its own recipe for lethal injections.

But if any state could benefit from innovation, it is California. After all, who can manage such a place, which has been a state since 1849? That’s a very long time, during which one generation of state lawmakers after another has undoubtedly been driven to near madness with the sheer bigness and too-much-ness of it all.

Our endless housing controversies could benefit from Silicon Valley innovation, even if the tech world has shown little interest in urban issues so far. (One exception is the wildly popular game “Angry San Franciscans” in which city residents try to protect their bus stops from being used by busfuls of wicked green techies en route to Cupertino.)

The ThreeCA concept, for example, could be used to create an array of Urban LifestylePreferences™. Each state can offer a different type of urban growth, and existing residents can migrate to whichever CA they find most congenial. One state, for example. could take the No-Growth path, in which getting a building permit for a house on the shore or the foothills would take so long that either the proposed building site would be immersed by rising sea levels or consumed by wildfire, or both.

To solve housing needs in the Zero-Growth state, population increases are outlawed. Parents can be discouraged from illegal births by taking infants from their parents and sending the babes to orphanages in Nevada and Wyoming. (The children themselves might not be thrilled to grow up in these out-of-the-way places. On the other hand, each child will be able to afford a one-bedroom apartment when she grows up (assuming, of course, that she has two jobs).

If you don’t want to live in Zero Growth, a second new state could encourage laissez-faire development and unbridled urban sprawl. In this builder-friendly state, freedom’s just another word for never being more than a mile from McDonald’s, three blocks from Starbucks or half a block from a Subway sandwich shop. If officials could rid the state of some outdated zoning laws, you’ll be able to open a Subway franchise in your own living room.

If Builder Friendly sounds too busy for you, yet another state could be “Smart-Growth Only.” This regime requires every new apartment building to be architecturally awesome, equipped a roof-top garden and no parking whatsoever. (Automobiles will be suspended from big helium balloons and hidden in the shade of redwood trees.)

One drawback: The only person who could afford to live here, however, would be Mr. Draper. As the saying here goes, “If you ask about home prices, you must be the dog-walker.”

Actually, none of these ideas has test-marketed very well. Time for more research! Excuse us for a second… "Siri, how would you solve this housing crisis?" (Creepy Siri voice: “Ask Elon Musk to invent a flying apartment building that can make stops at Pleasanton and Livermore….”

So much for the merger of city planning and Silicon Valley. While no expert in California government, in the land of blind billionaires, I am a king. Let me put this as gently as possible: Creating three new separate state governments would not be more efficient than one functioning system. True, it’s a very big state with a long list of issues. This fact does not, in itself, make multiple governments a better idea.

Edmund Burke, the 18th Century English politician who was critical of both the American and French revolutions, still had some interesting observations. One of those was that long-standing institutions, such as government, form slowly over time, incorporating experience along the way. If government has problems, replacing it with Like-Whatever-CA might not be an improvement. Indeed, the cure might be worse than the disease.

Mr. Draper, if you want to help California, educate yourself about transportation, low-cost housing and better outcomes for the homeless. But please, sir, heed the court and put the butcher knife away: This cow is not for carving.