You are here: Home » Articles » Book Review: State of Resistance

For those of us who have forgotten — or never knew — Pastor makes this history abundantly clear in his new book State of Resistance. Starting in the 1950s, State of Resistance offers an accessible, lively account of California’s dramatic, and rapid, transformation from conservative, Republican, white-dominated promised land to liberal, Democratic, multiethnic redoubt. For planners, State of Resistance may prove indispensable for understanding the larger political trends in which they are working.

While the current “resistance” centers mainly on national issues like immigration, civil rights, and the general air of depravity ascribed to the Trump administration, Pastor sprinkles in important references to land use. As a professor of sociology at USC, longtime champion of environmental justice, and member of the Strategic Growth Council (see CP&DR interview), Pastor is well attuned to the politics of land use and urbanism.

Among several conservative milestones that Pastor discusses, one of the earliest, and perhaps most enduring, is the bane of many planners’ existence: Proposition 13. 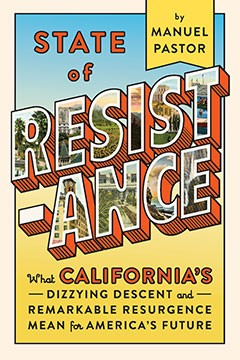 Pastor adds a chilling layer to the common narrative that describes Prop. 13 as an older generation’s attempt to stick it to younger generations. Pastor reminds us that California’s new suburbs in the 1950s and 1960s "were highly segregated even as they were being rewarded with new schools, new roads, and even federal and state largess.” As the original suburbanites aged in place, they would have seen minority young adults moving in the their neighborhoods and minority children enrolling in local schools in 1978. Prop. 13 was thus the attempt (largely successful) of an older white generation to stick it to younger generations of color.

In light of this demographic shift, Pastor writes, "the spoils that have been acquired from a system designed to privilege white Americans and their hard-won homes would be preserved for exactly that demographic.”

For the next two decades, Californians voted for governors like George Deukemejian and Pete Wilson — both moderate Republicans, but Republicans nonetheless. More distressingly, they supported propositions such as 1996’s Prop. 209 (anti-affirmative action), 1998’s Prop. 227 (English language), the  “three strikes” sentencing laws, and, most infamously, 1994’s Prop. 187, which denied social services to undocumented immigrants. Pastor walks us through this era, culminating in the Republican-led recall election of 2003 and the governorship of Arnold Schwarzenegger.

Indeed, while today the election of a Republican governor is nearly unthinkable (even in the face of nearly undistinguishable Democrats, to put it charitably), California had a run of 28 years in which a Democrat did not serve for even a full term. Pastor approvingly describes the confluence of demographic changes and ideological maturation that, beginning with Jerry Brown’s return in 2011, state’s reawakening.

Interestingly, Pastor finds the beginning of California’s leftward shift in land use. He describes a softening of the politics of the state’s business community, particularly among younger tech companies, than replaced blue-blooded establishments. Pastor writes that business supported social services and civic amenities because of "the idea that they were key to the quality of life that could attract and secure the loyalties of the high skilled workers.” He continues, "with many high-tech workers valuing the diversity and excitement of the city...there were market as well as planning forces pushing along a new metropolitan configuration.”

Meanwhile, the environmental movement, buoyed by concern for climate change, began to undo some of the spatial damage done by Prop. 13’s indirect encouragement of greenfield development. "Environmentalists who had long been concerned about the loss of green space caused by sprawl took advantage of the opening to suggest a more compact style of development might be more economically efficient as well as more sustainable...with what would become known as 'smart growth,’” Pastor writes. To these points, Pastor praises business coalitions, especially in the Bay Area, that pursued progressive land use policies for the common good and their own self-interest.

For Pastor, California completed its transition to a predominantly liberal state with the 2014 passage of Prop. 55, a broad revenue measure opposed by the Howard Jarvis Taxpayers Association. Not shy about his own political tendencies, Pastor writes, “good won over evil by a nearly two-thirds majority.” Even so, Pastor would like to vanquish one more vestige of conservative California: “The fat, juicy target – one of would also symbolize finally putting to rest the right-wing, anti-government tax revolt that shredded California's finances and future – is the overturning of Proposition 13.”

That hasn’t happened yet. But the resistance is playing out in land use nonetheless.  Whereas many planners may fancy land use as apolitical — or at least non-ideological – Pastor notes the causal and mutually reinforcing relationship between land use and political inclination: "The new built environment–-more city, less suburb, more transit, less auto–-has shifted power and dynamism away from the right wing base in the suburbs and far-flung rural areas of the state.”

Pastor acknowledges the urgency of the housing crisis and its relationship with — for better or worse — California’s new politics. Given the tensions over development, truer words were never written than these: "The housing dilemma is a perfect illustration of what is fundamentally at stake: California has abandoned an old model of suburban sprawl that was environmentally unsustainable but it has not yet developed a new model that is economically sustainable”

Even so, Pastor could have gone much deeper into the debates over housing. As I have written, California’s success as a “state of resistance” depends in part on its ability to house all of the progressives who live and would like to live in the state. Indeed, many progressives have fought against increased development on legitimate but, I would argue, short-sighted grounds. Pastor does not discuss these charged debates directly. He does, though, offer pragmatic advice that Californians from all arcs of the political spectrum can take to heart: "The state has embraced a new and more compact form of development, but reducing the displacement caused by gentrification will require an expansion of land trusts, rules against eviction, requirements and developers build or contribute to affordable housing, and a vibrant housing movement to make all this happen.”

While Pastor is a scholar who cites his sources carefully, he makes no secret of his own political inclinations. He approves of these recent developments and he is no fan of Donald Trump, to put it mildly. He even includes a faint shout-out to Ronald Regan, who was "was more often ideological intoned in practice, a fact frequently forgotten by his sycophants." Pastor is a lively, and sometimes witty writer, and he seems well aware that he needs to inject rhetorical flair into a topic that could, for all of its importance, be deadly dull in the wrong hands.

While I admit to my own historical blind spots, pre-1990s, Pastor has them too. There’s no denying the drama of the time frame that he discusses. He reminds Calfornians of a past that many of us have probably forgotten, either because of youth or simply our zeal for the present-day. But, in doing so, Pastor glosses over much of the earlier history of the state’s progressiveness.

California was, of course, the home of the Free Speech Movement, the hippies and Summer of Love, the farm workers’ movement, the environmental movement, Governor Moonbeam, and so many other progressive movements. While those topics warrant a book of their own, it’s odd that Pastor does not at least allude to them and situate them in the state’s long-term political evolution. They surely would not have weakened his argument. They just would have illustrated that every political paradigm shift is as much cyclical as it is revolutionary -- and that today's dominant ideology often started as yesterday's fringe movement.

Let us hope that today’s resistors will develop long memories — thanks in part to accounts like State of Resistance — and make sure that the ugly side of California does not rise again.