You are here: Home » Blogs » How an Arizona Outpost Quenches California's Thirst

Five-hundred miles inland from the Pacific Ocean, the Colorado River calms down, widens, and flattens somewhere between the gorges of Glen Canyon and the Grand Canyon. It was there that John Lee, a guilty party in the Mountain Meadows Massacre, set up a ferry service. He proceeded to raise his 56 children, with his 19 wives, before being prosecuted and facing a firing squad in 1877.

It was the only crossing of the river for hundreds of miles, connecting one wasteland to another.

Today, Lees Ferry, in what is now Arizona, does not so much connect as divide. It marks the boundary between the Upper Colorado Basin and the Lower Colorado Basin. The Upper includes most of the mountains and tributaries that make the Colorado what historian Marc Reisner called “The American Nile.” The Lower Basin is an arid Purgatory through which the water travels on its way to the sea.

Hydrology and geography distinguish the basins from each other, with Lees Ferry as good a boundary as any other. The river gets 93 percent of its water from the Upper Basin. But, a miracle of regulation and legislation has made Lees Ferry the very fulcrum on which the entire American West balances. It marks the boundary between where the water comes from and where the water goes.

You can appreciate how special a place Lees Ferry is when you consider the hydrological fury that enabled the Colorado to churn through the Kaibab Plateau – a fury matched only by the imagination of America’s 20th century engineers. Hoover Dam and Glen Canyon Dam collectively restrain up to 35 million acre-feet, or half of the system’s total storage capacity and more than twice the river’s average annual flow. 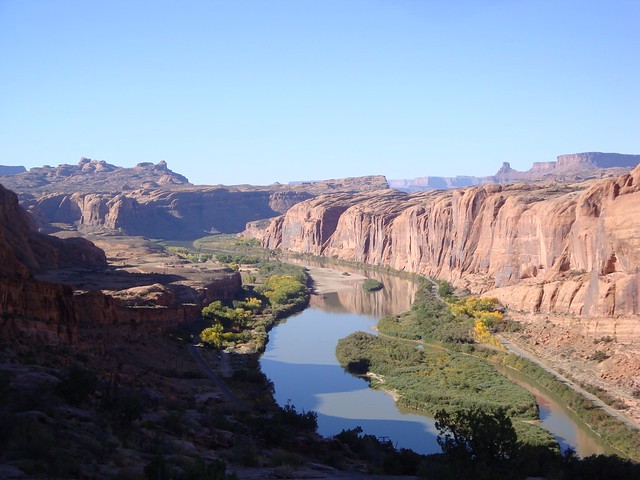 The 1922 Colorado Compact, supplemented by further regulations that are collectively called the Law of the River, achieves two things: first, it codifies the amount of Colorado River water available for human use; second, it apportions that water. Back in 1922, when all seven Colorado Basin states had a combined population smaller than Los Angeles County today, an equal distribution between the upper and lower basins probably seemed like no big deal. California received 4.4 million acre-feet, to Arizona’s enduring consternation. Needless to say, there was no EIS.

In total, the compact allocates 7.5 million acre-feet for each basin, plus 1.5 million for Mexico. The Colorado’s long-term average annual flow amounts to, at most, 14 million acre-feet, and much less during the recent 20-year drought. What could go wrong?

Just as a lucky drop of water that makes its way to the Sea of Cortez – or, these days to the Tijuana Aqueduct—can trace its path all the way to a peak in Rocky Mountain National Park, so can the American Southwest trace its existence back to the raising of dams, the signing of the compact, and, indeed, the first explorations of the river, most famously by John Wesley Powell in 1860. Before then, the history of the river belonged to Native tribes, whose influence over the river has been reduced to a trickle.

While California is plenty thick with history, the typical Californian probably doesn’t think about it very much. But in every panel at the Lincoln Institute of Land Policy’s Journalists Forum, hosted by the Babbitt Center for Land and Water Policy in Phoenix a few weeks ago, I couldn’t help thinking about the connection between the swimming pools of Orange County, the lawns of the Inland Empire, the golf courses of the Coachella Valley, and that crossing where John Lee found his refuge. Every day, we are drinking, bathing in, and flushing down his legacy.

The forum focused on the Colorado in exquisite detail. By some account, the Colorado is the most regulated, engineered waterway in the world (rivaled, perhaps, by the Sacramento Bay-Delta). It offers no end of discussion topics.

And yet, no topic could be more simple: water starts in one place, succumbs to gravity, and ends up in another. In the case of the Colorado, 40 million people siphon it off along the way, and 5.5 million acres are irrigated by it.

What makes the Colorado so surreal for Californians is that the vast majority of users don’t even live in the Colorado Basin. While much of California’s allotment stays close to the river, irrigating the fields of the Imperial Valley and then percolating (insufficiently) into the Salton Sea, that which is dedicated to residential use is pumped westward by the Metropolitan Water District and shared among its 26 member agencies and 19 million municipal customers.

Water influences urban planning only in the broadest sense. It doesn’t tell us where to build or in what configuration. But it determines how many of us can live here.

I suppose the average Californian doesn’t have to know or care where his water comes from. I wouldn’t blame anyone for being confused by our concoction of cities, water districts, aquifers, and aqueducts. And yet, the discussion – intense, detailed, contentious, and, despite plenty of good faith, without consensus – suggests that we really ought to pay attention, either to weigh in on political solutions, embrace conservation methods, or at least pay due reverence to nature’s largesse. Farmers can surely do their part, and cities can too.

Urban planners can’t change the Law of the River, but they influence over the ways people live and, indirectly, over the amounts of water they consume. They can design places that are sprawling or compact. Places that have shared green space or backyards. Places that pave over nature or that leave it be. Places that remember Lees Ferry or places that function as if water is just another abundant gift from a benevolent god.

I can’t help thinking about how water relates to something we obsess about almost constantly: traffic. Traffic is artificial and chaotic. It has no origin and no history. It goes every which way at all times. It seemingly knows no limits, and it cannot exist without infrastructure. It turns all of us into mutual enemies.

I don’t enjoy thinking about dams, canals, or water policy. I don’t enjoy thinking about the drought. But I – and all of us – need to think about them. We need to think about how we can share our resources fairly and how we can prepare for perpetual drought. (Congress recently approved an agreement, miraculously hashed out by all seven Colorado Basin states, to allocate river water in times of drought.)

The thing about a fulcrum is, you can find a balance. But you have to consider the load: with too much weight, the rod snaps in half; the scaffold collapses. If California and its neighbors keep consuming at their current rates, the West will face a catastrophe as if the Hoover Dam burst, but so slowly that no one noticed it was happening. It’s easy to forget that accomplishments we consider mostly permanent rely on something ephemeral, nearly invisible, and only partly controllable.