You are here: Home » Blogs » Going Urban in Orange County

Even Orange County is going urban.

The latest evidence is Lennar's "Central Park West" project  almost 1,400 condominiums, plus a little retail and office space, on a 43-acre site just off the Jamboree offramp of the 405 Freeway in Irvine. I visited the construction site on Monday (8/13) as part of an event sponsored by the Orange County chapter of the Building Industry Association.

On its own terms, Central Park West (www.cpwliving.com) is a pretty good example of emerging Orange County urbanity. The math works out like this: an overall density in excess of 30 units per acre, a smattering of retail (20,000 square feet) and office space (90,000 square feet), as well as more than 4 acres of park space, plus roads and so forth. About 5% of housing consists of affordable ownership units. 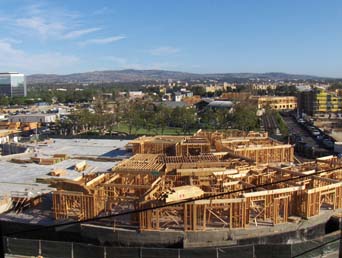 There's a variety of building types, including two- and three-story buildings; four- and five-story podium buildings; and two high-rises. Even the smallest buildings contain more than 20 units per acre. Most of the units go for close to a million. The market is clear: Young professionals and empty nesters who work in the nearby office buildings and don't want to fight the traffic. (The high-rises have great views of the eternal traffic jam on the 405.) Lennar proudly states that the company has followed all the rules of urban development: walkability, verticality, integrated retail, a community center, and no walls.

No walls, at least, within the project itself. In the way it relates to surrounding areas, Central Park West is still what planners used to call a "pod"  completely walled off. The site  the former location of a low-rise manufacturing plant  is surrounded on all sides by high-rise structures, mostly office buildings. But it's bounded by the freeway on one side and by Jamboree and Michelson  very wide arterial streets  on two sides. The fourth side is along a little-used street, but it's basically a wall of parking garages that serve nearby office buildings, and Central Park West is walled off from that as well. There is some talk of building a pedestrian bridge across Jamboree to the nearby retail.

And though there's some underground parking, especially for the high-rises, Central Park West pretty much sticks to suburban parking ratios (2+ per unit) and, for the smaller buildings, it sticks to the connection between all parking spaces and the unit itself. This may be a practical reality, but it really boxes in the designers, especially in the smaller buildings. The most luxurious low-rise condominiums have tandem parking spaces, simply because to do otherwise would force the density way down  if you want to maintain a connection between the unit and the parking. Unbundling the parking may work in downtown L.A., but apparently even developers thinking urban are still afraid to do it in Orange County.

Then, of course, there's the name. The marketing idea, of course, is mid- and high-rise living overlooking what Frederick Law Olmsted used to call a "greensward". However, the grassy part of "Central Park West" is 2.2 acres. Just for the record, the real Central Park is 382 times bigger than that.