You are here: Home » Blogs » What We Can REALLY Learn From Portland

What We Can REALLY Learn From Portland

For a publication based in California, we sure write a lot about Portland. I guess this isn't surprising, given Portland's iconic status as the planners' nirvana  the place where planners' crazy ideas get implemented and actually work and make everybody happy. But there's another reason why we write about Portland: It is a place where a lot of things California planners talk about are ground-tested and, most of the time, actually work.

Portland's achievements are especially impressive given the fact that Portland is not an enormous city  at about a half-million people, it's roughly the size of Oakland, Fresno or Long Beach. This doesn't mean that every city in California should slavishly follow Portland's example. It's never a good idea to simply point to another city and say, We should just copy them. But it is worth thinking about why Portland does things  and does them successfully  that a lot of other cities can't seem to do.

After a visit to Portland last week, I'd say there are six important lessons to learn from Portland. The important thing is to apply the lessons to your own town, and not try to recreate Portland.

Although it's only a half-million people, Portland has a huge downtown core, a large industrial area now being revitalized (the Pearl District) and all kinds of civic endowments from the wealth-building years as a timber capital  such as, for example, a park seemingly every three blocks in the downtown. The lesson here is not to try to create buildings or neighborhoods like Portland's, but to understand what your raw material is and use it to your best advantage.

2. They're not afraid to just build stuff

This is perhaps easier to do in a world where you don't have to worry about the California Environmental Quality Act, but it's amazing how much stuff gets built  even stuff that sometimes seems loony in concept. Since my last visit seven years ago, Portland has built the aerial tramway from the South Waterfront (the flats just to the south of downtown) to the Oregon Health Sciences University campus on Marquam Hill. No other city in the United States except New York has ever even tried to build such a tram, and the Portland project was plagued by secretiveness, political controversy, 1,000% cost overruns, and neighborhood opposition. In the end, they built it anyway  and it is now the key to keeping the city's largest employer in Portland and an anchor for a series of condo and office towers in the South Waterfront area (also proof that they're not afraid to build stuff). Sometimes you just have to build stuff and see what happens.

3. They never stop thinking about the actual walking experience

If you look carefully at both Downtown Portland and the celebrated Pearl District, you'll realize that, although both are built on small grids, we are not talking about the typical New Urbanist wet dream of four-story neoclassical boulevards. For every two or three handsome '20s downtown midrise, there's at least one mid-century modernist monstrosity.

Radically mixed densities and uses in the Pearl District.

But, partly because of the 200-foot blocks, even these behemoths have created totally walkable places. The Pearl District might have a one-story electrical company adjacent to a three-story converted warehouse adjacent to a 15-story condo tower  yet all have a great feel at the street level. Even if you have longer blocks in your town, you have to think about how to break them up  and never, ever overlook what it's like simply to walk down the street.

4. They keep reinforcing the connection between development and transportation 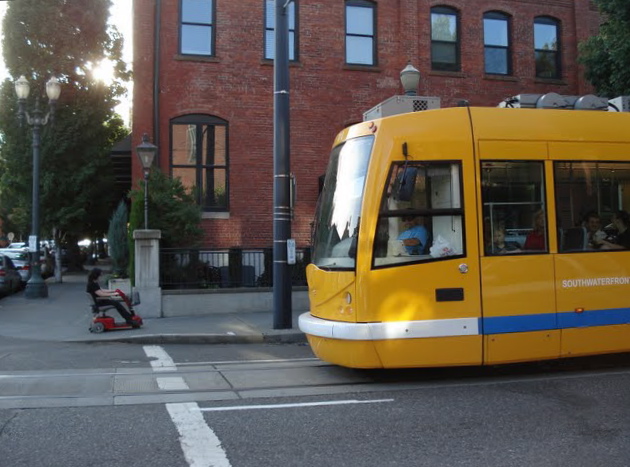 A seamless transit system connecting disparate yet distinct areas should be a cornerstone of a good city, but it's one that we in California keep getting wrong, even in the transit-rich Bay Area. In Portland, the new transit stuff reinforces the development pattern, even when (as with the tram) it seems like a pipe dream. This week, Tri-Met will open a new light-rail line to Union Station, which is located in a semi-industrial area rich with redevelopment possibilities. An even more dramatic example is the Portland Streetcar, which connects a variety of dense activity centers in downtown Portland, including Portland State University, the Pearl District, downtown, and the South Waterfront (where it connects with the aerial tram). The streetcar would make traffic engineers cringe  it's so slow that sometimes you can beat it just by walking. But underneath the hokiness it may be the best urban collector system ever created. If the streetcar didn't exist, a bunch of useful but inefficient little buses would have to run around Portland connecting things  similar to L.A.'s DASH buses. But the streetcar pulls together all the collector systems into a distinctive "brand" that's integrated into the entire TriMet system. Other cities don't have to build a streetcar  but they do have to find ways to use small buses or other transit vehicles to link together major employment centers, and do it in a distinctive way that brands the collector experience as unique, fun, and just a part of the experience of being in the town.

5. They keep strengthening the informal aspects of city life

Here's just one example: You have never seen anything like Portland's food carts. They line up by the dozen in parking lots, facing the sidewalk, creating an instant streetside food court of amazing and inexpensive culinary choices. This is not urban planning, exactly  or, at least, they're not about building higher density and more public transit. Rather, the food carts  like lots of other things you see in Portland  strengthen what you might call the Jane Jacobs side of the planning equation  all the quirky, interesting, and sometimes even necessary little human-scale things that make up urban life. And, by the way, that's one of the things that seems to underlie Portland's success: there are so many people in town who love urban life and want to make it work in a mid-sized city. So add "urban" to the list of things they're not afraid of. Again, it's not necessarily a matter of putting food carts in your downtown parking lots, but finding something small and quirky and fun that's distinct to your town and making it work.

6. They're not holding out for perfection

Don't ever forget that most of the Portland metro area is just like anywhere else. There are freeways and subdivisions and confusing arterials and big malls and stupid little strip centers. But part of the message is that you don't have to transform your whole city  only those parts of your city that are ripe for the transforming. There is no better advertisement for creating more walkable cities than  well, than creating just one walkable neighborhood in your town.