You are here: Home » Blogs » Apartments: The New California Dream

It's official: Apartments are the new California dream. At least for now.

Between 2011 and 2013, statewide about 40,000 multi-family housing units were constructed, compared to 39,000 single-family units. And of the single-family units, 3,000 were townhomes.
Although this makes a good headline, it shouldn't be very surprising. There's been a general trend toward multifamily construction in California since the 1990s  it was temporarily reversed during the housing boom of 2000-2006  and in the last couple of years rental apartments have been virtually the only housing product for which California developers can obtain financing. And the overall numbers are very low compared to the boom, when 200,000+ housing units were being constructed per year.

The numbers in the coastal counties were off the charts  87% in L.A; around 75% in Santa Clara, San Mateo, and Ventura; more than half in San Diego and Orange counties.

These numbers will change as the housing market comes back. The inland counties are sitting on an enormous supply of entitled single-family lots, and as the market comes back those houses will be built. But the idea that the California dream includes multi-family housing  especially in the coastal areas  is now too deeply embedded to be denied. 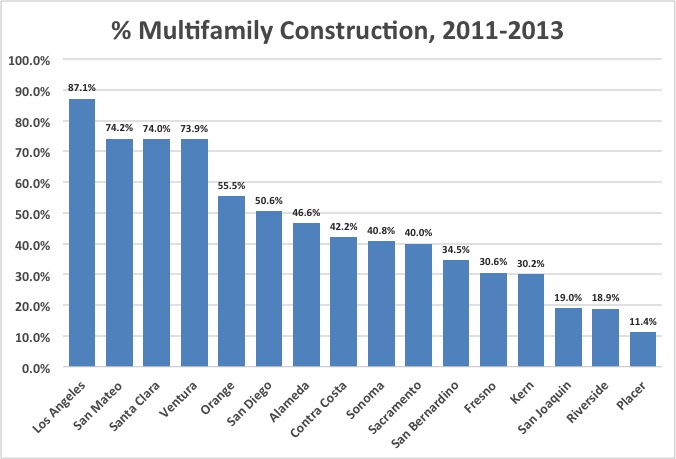