You are here: Home » Articles » A Vivid Warning for Coastal Cities

A Vivid Warning for Coastal Cities

Currently on display at the Annenberg Space for Photography in Los Angeles, Sink or Swim: Designing for a Sea Change is an arresting exhibition depicting consequences of, and solutions to, rising sea levels. It includes photographs by artists and journalists of disasters, like Hurricane Katrina and the Japanese tsunami, and responses, like floating schools in Bangladesh, sculpted sea walls in the Netherlands, and the restoration of the Malibu Lagoon, just a few miles away. Sink or Swim celebrates, and issues a charge to engineers, designers, and public officials to acknowledge rising seas and start embracing ways to build resiliency.

A lot of climate change is a data story. It's a sad story and that tends to be quite hard to convey in a way that is emotionally stirring. What photography can do is get to the human heart of a story. 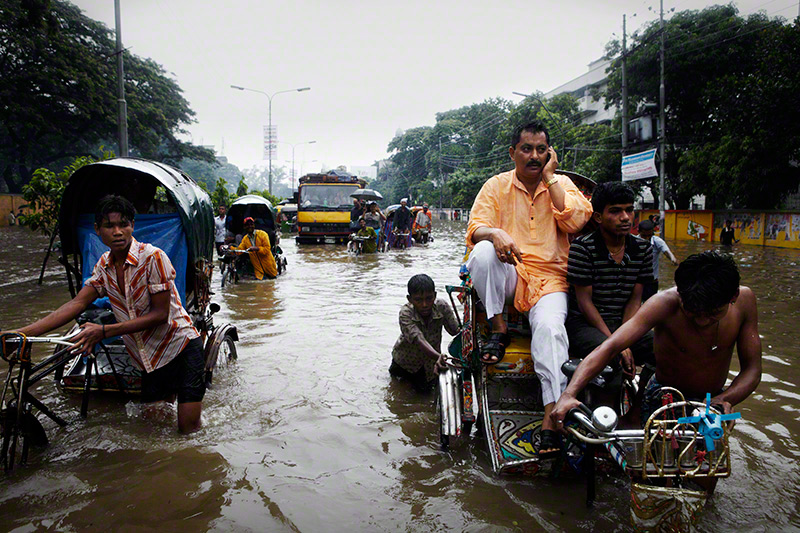 To what extent can we say that it was because of climate change rather than a freak disaster?

I don't think we can say this was because of climate change, and I don't think the show is doing that either.

One of the things that was truly fascinating that emerged in researching the show was the kind ofan issue that was kind of equally compelling, which is our propensity to live in vulnerable situations. An astonishing percentage of the world's population now lives on coastlines. We build right up to the water in estuaries, deltas. Five-hundred years ago we saw water as both a precious resource and something to fear. We now build right up against coastlines. So we have built ourselves into vulnerable situations. I believe that's a corollary to the story of climate change.

Some images come from highly developed countries with incredibly sophisticated resilience response, and then you have places like Benin that are as poor as they come. What messages are we getting from those contrasts?

The show is about architecture and thereby it's about ingenuity. Ingenuity can take the grassroots vernacular form, and it can take the highly resourced, highly developed form of sophisticated infrastructure.

I definitely felt it's important to show a kind of range of thinking because the issue of climate change and rising seas is global. If one was to think about, say, Bangladesh one would one would think more astutely about Bangladesh's situation if it was shown that there was some analogy to our own situation, and vice-versa. The global connectivity in this issue that was certainly something we wanted to get across in the exhibition.

Some of the photographers are artists, and others are journalists. What's the relationship between journalism and art in these photos?

You want people to linger on photos. You want photos to be so compelling that people are drawn to look at them and then think about the stories. I think it's a crossover. There's an incredibly good journalistic photo goes to some higher level of engagement.  I think there's a whole conversation about what constitutes art.

In choosing the photographs for this exhibition, which I did in concord with Pat Lanza, I don't think we were asking ourselves, "is this journalism, is this art, what is it?" I think we were looking at images and asking, will this grab the viewer? If people think it's art, that's great. If they purely think its good visual reportage, that's good too.

I think one of the big questions is, when does the photograph become too beautiful? We don't ever want to sanitize or render the human story here so visually compelling and lovely that it gets separated from the issue. We're trying to arrive at a place of a really compelling image that, at the same time, dramatizes the issue that we're trying to explain.

We didn't make this part of a partisan political fight. We didn't even go there. In that sense, we endeavored to make this an exhibit that would appeal to everybody. What I've heard anecdotally is that people expected to find something depressing. One of the reasons people will turn away from the issue is that it feels so big, and "what on earth can I do about it? It's too big to even think about."

What I did hear is that people went to the show and found it inspiring. They felt that what the show largely depictedand this was our goalwas ingenious thinking and the human capacity to adapt. Hopefully (the show) rises above the issue of climate changes and says, look at what the human community is capable of doing.

What has to change about our approach to resiliency?

What really did strike me over and over again, talking to many people in completely different locations is that going forward, is that we cannot build in a post-war Modernist way in that we segregate ourselves from the perils of nature. We channelize our rivers, we wall off our seas.

The meaning of resilience is that we have to find a way to build in concert with nature that provides protection while accommodating our rivers, our coasts.

The Los Angeles River plan where they want to soften the edges. There's this sensibility that suggests that moving forward we have to incorporate soft and hard defenses. That could be absorbent wetlands coupled with well conceived strengthening structures. That to me was the overriding philosphy I came away with.

What roles must architects, engineers, and planners play?

It has to be more multidisciplinary. There's been a segregation of these professions for many decades. The Rebuild by Design Projects, which are speculative, what they suggest is a multidisciplinary approach that brings in architects and engineers and landscape designers and members of the community and political representatives and so on and so on. The view is that there has to be a collective and comprehensive approach that takes into account the forces of nature and our capacity to defend against them and create this combination of soft and hard defenses.

Sink or Swim is on display at the Annenberg Space for Photography, in the Los Angeles office district of Century City. The classic edge city, Century City could not function without personal automobiles. Its office towers are accompanied by thousands of parking spaces, and a subway stop is many years away. It is exactly the kind of place that has contributed to greenhouse gas emissions. The day I visited it was 85 degrees. It was January 28.

Sink or Swim will be moving to the Long Beach Aquarium in June.

This interview has been edited and condensed. Portions of this interview appear in Josh Stephens' review of Sink or Swim at Nextcity.org.