Sometime in the not-too-distant future, the American Planning Association's Burnham Award will go to Dr. Elizabeth Vaughan. She will be recognized for, among other accomplishments, forcing improvements to a mega-development on Manhattan's West Side, elegantly creating more affordable housing, and making peace with anti-gentrification activists.

A former professor of planning, Vaughan is exacting, keeping an entire Census' worth of data in her head and crunching numbers on the fly; she analyzes every alternative in her head and sees demographic and social trends long before they take place. She has the toughness, intellect, and resolve of Janette Sadik-Kahn. She also has the awkwardness, self-doubt, and nonexistent dancing skills of Elaine Benes.

If Elizabeth sounds like an improbable character, it's because she is. She is fictional. Even so, as the central character in the Broadway musical "If/Then," currently on a national tour that begins in California, Elizabeth Vaughan may be the most famous urban planner in the country.

Played by Broadway megastar Idina Menzel, Elizabeth is the quintessential child of the 1990s (she celebrates her 39th birthday onstage). She and her cohort weathered urban decay, stayed healthy through the early AIDS crisis, made the country (or at least New York) a more tolerant place, and survived life before iPhones. She and her friends are spirited, liberal, and diverse to a fault. Matrices of gay couples, straight couples, biracial couples portray a colorblind and gender-neutral culture. It's a sanitized version of the cosmopolitanism that flourishes in many American cities even as intolerance and fear rises in the hinterlands. Their world is chaotic yet comfortable; they are not quite yuppies, but they're doing OK. They enjoy New York City for all it's worth, from strolls in the park to soliloquies on the fire escape to the chance to bump into 8 million other fascinating humans in any one of the 525,600 minutes that make up a year. 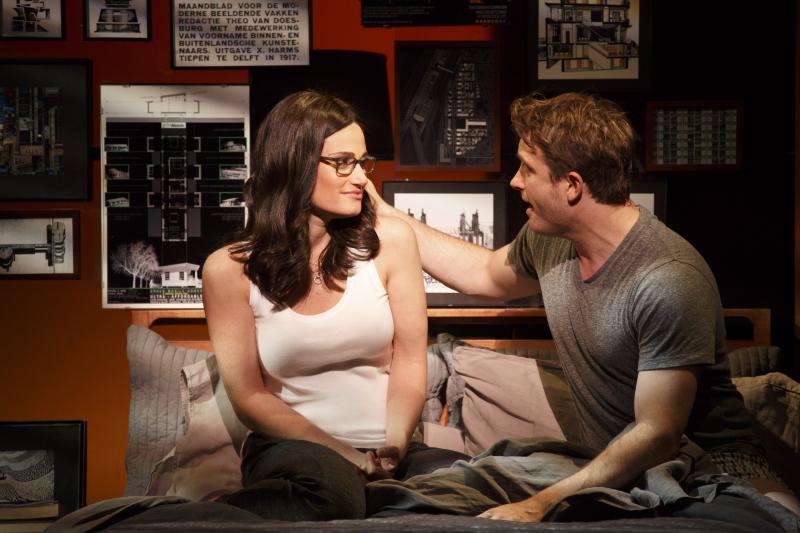 If "If/Then" sounds like "Rent" all grown up, that's because it is. It shares both cast members (including Menzel) and creative team members with the original 1996 Broadway production of Rent. And of course it shares a city. But, whereas New York was but the backdrop for the Rent kids to explore their Bohemian anguish, the city takes center stage in "If/Then." A literal "sidewalk ballet" is on display in song-and-dance numbers -- in parks, on balconies, in offices -- that celebrate urban life with full throat.

Menzel has just enough humility to play Elizabeth with humor and self-awareness. Perhaps too much self-awareness. Elizabeth constantly enumerates her flaws, chief among them is her ability to make "poor choices." Elizabeth is happiest when she is analyzing the tendencies of 8 million data points. When she has to decide for herself -- work for the city vs. teach college; go to a party or go to a protest; sleep with her boss or marry the handsome Army doctor -- she is nearly paralyzed. She wonders constantly, obsessively about the sidewalk less traveled.

In many cases, the world ends up choosing for her.

"If/Then" operates on a clever, if overwrought, narrative conceit. Like the 1998 Gwyneth Paltrow movie Sliding Doors, it follows two storylines at once, with scenes and their alternatives weaving in and out of each other. The people, places, and relationships remain the same but the choices are different. And, of course, so are the outcomes.

If Elizabeth, who is "Liz" in one storyline and "Beth" in the other, chooses to marry the handsome doctor, then her best friend, Lucas, marries the doctor's best friend David. If she takes the job with the city, Elizabeth doesn't marry the doctor but instead ends up in halting friendship-romance with the same Lucas. Taking cues that date back to Sophocles, "If/Then" wonders, pedantically and entertainingly, whether we are governed by ourselves or our stars. Or by our city.

Whatever choices "If/Then's" mere mortals make, they take place on the foundation of New York. Whereas "Rent" celebrated urban life, "If/Then" celebrates the city as such. "Urban planner" isn't just a convenient backstory for Elizabeth. It's a focal point of the plot. Amazingly, we see Elizabeth "doing" urban planning in scene after scene. When Elizabeth isn't actively guiding the city's future, she and her friends are out there living in it. One of its best scenes has Elizabeth's irrepressible friend and obsessive matchmaker Kate serenading gentlemen in a subway car, quite unlike the common panhandler.

Menzel has a colorful supporting cast, but the story revolves literally around her. She is the fulcrum between which head and heart balance. Her choices are the ones that determine whether her friends are gay or straight and whether they take one job or another. By the time she becomes Director of the Department of City Planning, her choices are also the ones that determine where thousands of New Yorkers will live, how their public spaces will look, and whether Penn Station will finally get exhumed.

If ever a character has romanticized the planning profession, it is Elizabeth. She is the consummate pragmatic idealist. She understands the joy that pulses through a great city while she keeps the numbers all in their rows. Elizabeth and her colleagues speak honestly about gentrification, demographic trends, tensions between developers and stakeholders, political alliances, housing costs, and everyday things like bike lanes and sidewalks. Planning -- if we take it in its purest form, serving the masses and making life better on average -- is the ideal foil for the messiness and uncertainty of individual existence.

As much as "Rent" romanticized the creative loafing and angst of the 1990s (while its predecessor, "Angels in America" revealed the horrors of the AIDS crisis), "If/Then" is a celebration of professionalism. It's a little forced, but it's a refreshing change from Broadway's obsession with meta-drama. (Think "A Chorus Line," "The Music Man," "Cabaret," "Gypsy," "42nd Street," "Phantom of the Opera") "If/Then" is not quite dancing about architecture, but it's close, and it works.

Brian Yorkey, who wrote the book and lyrics, did his homework. Though Menzel's black mane would have to go silver before some of her signature projects actually got approved, it's a reasonable portrayal of basic planning. Terminology is used correctly, the issues are genuine, and even the places in Manhattan, right down to a thinly veiled Hudson Yards, are real, illustrated with street maps and images of landmarks. If only all planners were as passionate as Elizabeth is, or as dazzling as Menzel is. Indeed, there seems to be an intentional chasm between Menzel's celebrity and talent -- though occasionally nasal, her voice is crisp and powerful -- and the anonymity and bureaucratic tendencies of her character's career. Whatever choices we may face, we cannot all be Broadway stars.

As a musical about place, it's hard not to think about "If/Then's" audiences. When performed in a theater encircled by the city it portrays, the urban themes must have been obvious. On Hollywood Boulevard, "If/Then" reveals urban possibilities about which Angelenos are becoming increasingly aware but from which they still sometimes recoil. San Diegans may have to consider the battles they've waged over regional planning. Folks in Orange County may glimpse a world they'd prefer to experience on stage than in real life.

The production must be prepared for a chilly reception when it goes to Tempe Jan. 12-17. One of Elizabeth's more regrettable choices was spending 12 years in Phoenix with her then-husband. With its sprawl and its air conditioning, the city bears the brunt of some genuinely unkind jokes in a musical that is otherwise sweet and forgiving. The creative team may have had no problem unloading on the city of Joe Arpiao and the state of SB 1070.

Let us, then, stop for a moment to contemplate that this review is about a major Broadway musical that is about urban planning. It is a first and probably a last. Whether this means that the profession has come into its own or whether it means that a single creative team got a whim and ran with it is anyone's guess. Planners should enjoy the spotlight while it lasts. And maybe they can even learn from it.

Understandably, neither Menzel nor her production won a Tony Award. The clever first act, which sets up the relationships and amply explores Elizabeth's dilemmas, devolves into melodrama in the second act. The music is not memorable enough, and the whole thing stumbles when it goes from light fun to grave seriousness. And yet, if "If/Then" can get audiences to think more deeply about cities and even get planners to discover (or rediscover) their inspirations, maybe Elizabeth will deserve that Burnham Award after all.