Urban freeways are often described in the language of carnage. Bisecting neighborhoods, disrupting street grids, harming disadvantaged populations, and barreling through valuable downtown real estate, they are variously referred to by detractors as scars, gashes, and wounds inflicted on the urban landscape.

The poultice of choice is made out of the same material as the scar itself: concrete. Cities are now envisioning caps that are, essentially, bridges that cover trenched freeways, typically for three or four blocks. Traffic would pass under them undisturbed while cities would gain acres of new space while restoring their street grids for the benefit of pedestrians and residents.

Cities in California have considered freeway cap projects for years, predating the recession of the late 2000s. Several projects performed initial studies, including several that received initial planning grants from the Southern California Association of Governments. But none has yet gotten past preliminary planning stages.

Now, with the resurgent economy and dearth of urban land, cities are redoubling their efforts.

Several projects are competing for the title of California’s first freeway cap.

Los Angeles’s Park 101 would cover a section of the 101 Freeway on the north side of downtown, where the freeway separates Chinatown, Olvera Street, and Union Statin from the Civic Center and the rest of downtown. A few miles north, the Hollywood Central Park would cover a 38-acre diagonal slash of the 101 through a medium-density commercial and residential part of Hollywood. The City of Glendale has similar plans for the 134 Freeway on the north side of its downtown, branded Space 134. 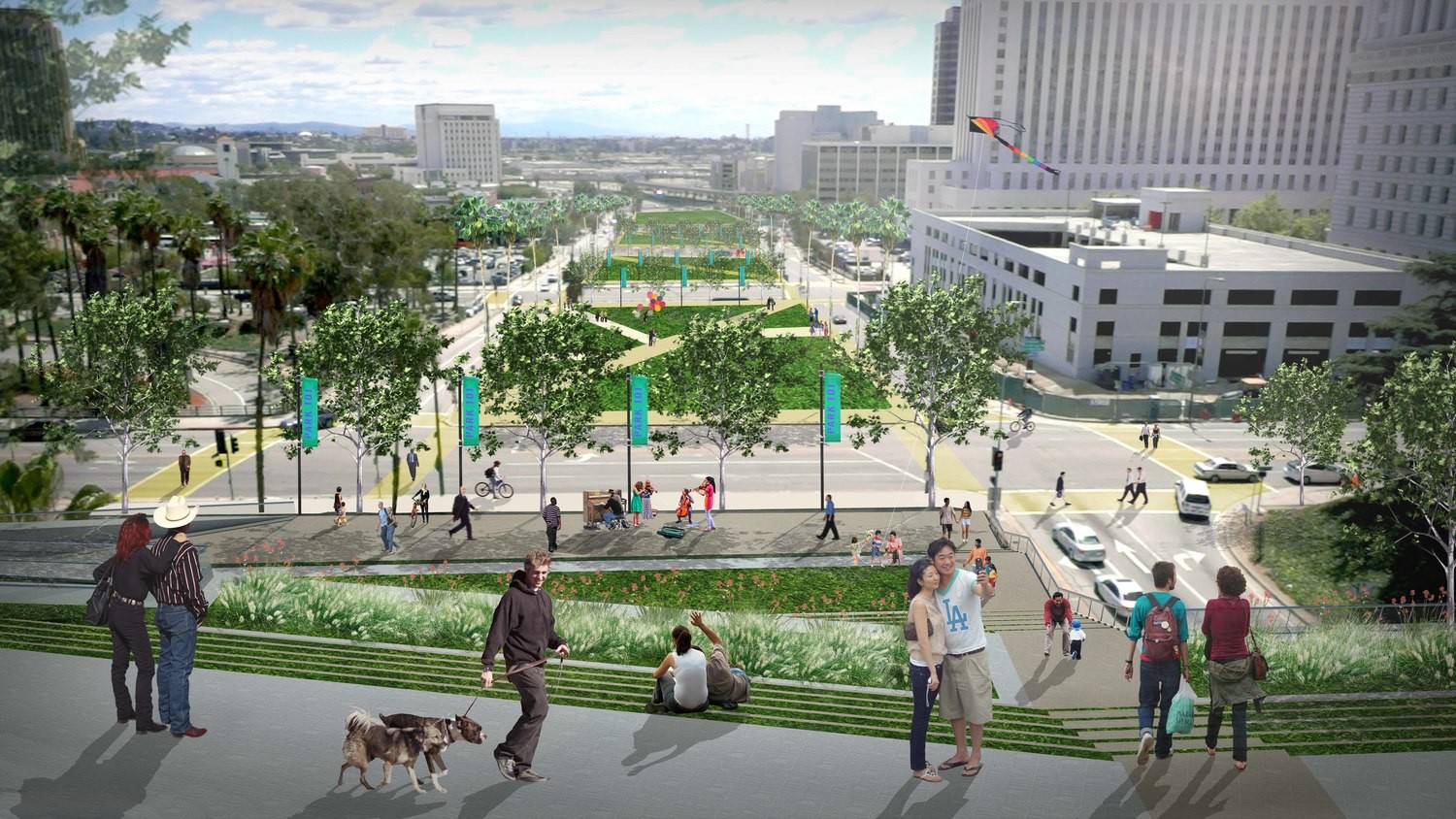 The 101 Freeway would disappear under a proposed cap park in downtown Los Angeles.

“There’s all this urban design, active transportation, health benefits to it,” said Cecilia Estolano, co-CEO of Estolano LeSar Perez, a planing firm that has conducted studies on Park 101. “There are also financial benefits. You’ll be unlocking the value of these parcels that heretofore have not been useful.”

More speculative projects include one in downtown Santa Monica, extending the McClure Tunnel and connecting the city’s retail district with its civic center; coastal Ventura, where Highway 101 separates the city from its beachfront; downtown Oakland; and two projects in San Diego.

Many of these projects have received support in the form of planning grants, and some are championed by nonprofit groups set up by civic leaders.

“We continue to fund them because now we see them as providing destinations, non-motorized connections, active transportation, park amenities, economic development, the whole range of benefits,” said Marco Anderson, program manger at SCAG and convener of the agency's ad hoc Freeway Cap Coalition.

While caps could support all manner of buildings, most of these projects propose that parks and other types of public space would occupy the reclaimed real estate.

“We’re a built-out city as many are,” said Glendale City Manager Scott Ochoa. “How do you create new property for open space?”

“With property values rising...imagine trying to build this type of park by acquiring land in downtown,” said Estolano. “We have dedicated so much land to the automobile. We are finally seeing a generational shift in our thinking. We want to reclaim this space for people.”

That’s the case in Glendale and both Los Angeles projects. Ventura, though, takes a more pragmatic approach. Ventura Community Development Director Jeff Lambert said that the city doesn’t necessarily need more park space, at least not in that location, since it’s a few blocks from the beach. And the cap could enable the city to demolish an obsolete beachside parking structure and thereby create more recreational space. Lambert said that the cap could provide for a whole host of projects, including a parking lot, a conference center, and, ideally, a new train station created from the existing Union Pacific trestle.

“We are in some ways creating new land….. if we can move that structure on to the freeway, we create a whole beachfront property for development,” said Lambert. “We have a beach, so we don’t necessarily need the open space. We need something more commercially oriented."

In many ways, boosters see freeway caps as true win-win situations, enhancing the public realm without distributing the essential transportation function of the freeways they cover. But several impediments lie in their way.

For the most part, engineering is the least of cities’ worries. Arguably less complex than the freeways they cover, caps present relatively straightforward engineering challenges. As massive as they are, they are essentially very wide bridges. They do not need supports because the trench walls already exist.

“The technical component is not challenging at all,” said Estolano. “This is not an engineering masterpiece, as I understand it.”

Freeway caps are, therefore, not necessarily as expensive as other meaty pieces of infrastructure might be. The 22-acre Park 101 is estimated to cost roughly $390 million, while Glendale officials estimate about half that for its 5.2-acre proposal . By far the largest proposed freeway cap, Hollywood Central Park is estimated to cost $1 billion. (By comparison, developable land in downtown Los Angeles has sold recently for well over $20 million per acre.)

“It’s not a small sum of money, but building it and getting the money to build it are not one of my bigger concerns,” said Glendale Community Development Director Phil Lanzafame. He noted that the immediate neighborhood has recently seen over $1 billion in investment for two retail centers alone.

In return for these investments, Estolano noted that the development of Park 101 would enable the city to develop several parcels that are currently moribund because of their proximity to the freeway, thus defraying the cost. It would also free up real estate by eliminating several little-used on- and off-ramps. And the plan calls for improvements throughout the surrounding area. She also suggested that freeway caps present ideal opportunities for cities (or other lead agencies) to use Enhanced Infrastructure Financing Districts, a relatively new funding tool based on tax-increment financing. (See prior CP&DR coverage here and here.)

Even with these funding opportunities, freeway caps are not going to build themselves, in part because they are not considered amnesties and not essential infrastructure.

"While the public sector is going to play the kind of key facilitating role...what’s really going to move the needle is a private sector foundation and champion….and to raise a lot of the seed money,” said Anderson.

Even with funding, none of these caps will see the light of day without approval from the California Department of Transportation, which has jurisdiction over the freeways in question. When many of these projects were first conceived, Caltrans’ cooperation seemed unlikely. Caltrans officials hesitated to support freeway caps because they would essentially prevent widening of the freeway segments that they covered. There was also debate about ownership of air rights.

“It’s not something that’s conceived of in the Caltrans manual,” said Estolano.

Recently, though, the agency has taken on a supportive tone. Anderson said that new leadership at Caltrans and the adoption of Smart Mobility Framework has encouraged the agency to embrace sustainability more so than in the past. It even sponsored a study of a cap over a small portion of State Route 94 in San Diego.

“It goes hand in hand in the last five years with the realization in LA County….those segments of freeway aren’t going to be widened anyway,” said Anderson. “Now there’s an understanding that Caltrans and SCAG and Metro are in a position to say, we know this segment is not going to be widened so we are comfortable going ahead.”

That’s not to say that Caltrans will rubber-stamp any of these projects.

“Our biggest issue is convincing folks that the money question isn't the major question; it’s the collaboration among government agencies,” said Ochoa. But at least cities now see some hope.

Regardless, none of these projects will proceed without public support and political will. Lambert said, for instance, that Ventura’s project has stalled in part because of the retirement of former City Council Member Carl Morehouse, who had been its leading proponent.

But boosters claim that the time may be right for many of these projects. The continuing renaissance of downtowns, like those in Los Angeles and Glendale, plus the dearth of park space make freeway caps essential and urgent, according to backers.

“LA can’t wait,” said Estolano. “We need to create better health impacts for people. We need to address some of the environmental inequities that occurred in the last half-century.”

Moreover, these mega-projects have, of late, become less fanciful and less daunting. Boston’s “Big Dig” — which included not just a cap but also an entirely new sunken highway — notoriously ran billions of dollars over budget in the early 2000s. But, in 2012, the 5-acre Klyde Warren Park opened atop a 1,200-foot stretch of the Woodall Rodgers Freeway in downtown Dallas. It cost $50 million, paid for with a combination of philanthropic, municipal, and federal funds.

“It is possible,” said Anderson. “It's not kind of a fantasy idea.”

As idyllic as they sound, some critics see a dark side to freeway caps — and they’re not just referring to light-deprived tunnels.

Chris Sensenig, an urban designer with Van Meter Williams Pollack in the Bay Area, founded a group called Connect Oakland. It advocates not just for capping Oakland's 980 Freeway but rather for its removal entirely. Sensenig’s position is grounded in a fundamental opposition to urban freeways.

"Freeways were created to connect cities. They were never meant to go through cities. The way they were implemented in cities were, quite frankly, systematic racism.”

Sensenig said that the 980 in particular never should have been built in the first place, that it’s under-used. At the same time, it commits all the other sins that urban freeways are accused of. Sensenig envisions removing the freeway, reconfiguring the surrounding streets, and reclaiming land for development. Most ambitiously, Sensenig sees it as a possible BART station served by a proposed second Transbay Tube.

The prospect of removing the freeway and turning it into a multi-lane boulevard with opportunities for development is included, in rough form, in Oakland’s recently adopted downtown plan. (See prior CP&DR coverage.)

And Sensenig rejects the win-win notion of a traditional freeway cap, which, he said, simply perpetuates cities' reliance on automobiles and automobiles’ offenses against cities. He believes that caps accommodate — literally covering up — something that cities should be demolishing with enthusiasm.

“Fundamentally, caps are foolish endeavors. It doubles-down on the freeway,” said Sensenig. “You’re putting that much more investment in the freeway being there. It’s going to be there forever, once that second round of investment is made.”

Despite objections such as these, support for freeway caps statewide may be reaching critical mass. And once one project gets approved, others may follow as the novelty wears off and regulations catch up with cities’ ambitions.

“If Hollywood cracks the nut, we will follow along,” said Estolano. “I would hate to think that each project will have to through all the same battles on their own.”

“It would be very interesting to see a piece of legislation that would map out a process that others could use,” said Estolano.