The Docks site was the orphan of downtown Sacramento. The broad, concrete shoulders of Interstate 5 divide the riverfront parcel from the rest of the city. Until recently, this 43-acre triangle of land remained almost entirely out of sight and out of mind from even nearby points in the city, such as the state Capitol and the enormous rail yards development, both only a few blocks from this site.

As it currently exists, the Docks site is an unplanned space, a leftover between the Sacramento River and the interstate. Some runners and bike riders are brave enough to push beneath the shadowy recesses beneath the freeway structures. In general, however, the Docks site offers very little to the city, and vice versa.

The environmental impact report for large-scale homebuilding, a multi-acre park (there are several proposals) and a linear park on the river bank are awaiting approval this fall. The city has handled the linear park and the development site as separate projects, under the same specific plan. This article focuses primarily on the development piece; of course, the developer and designer have yet to be selected. 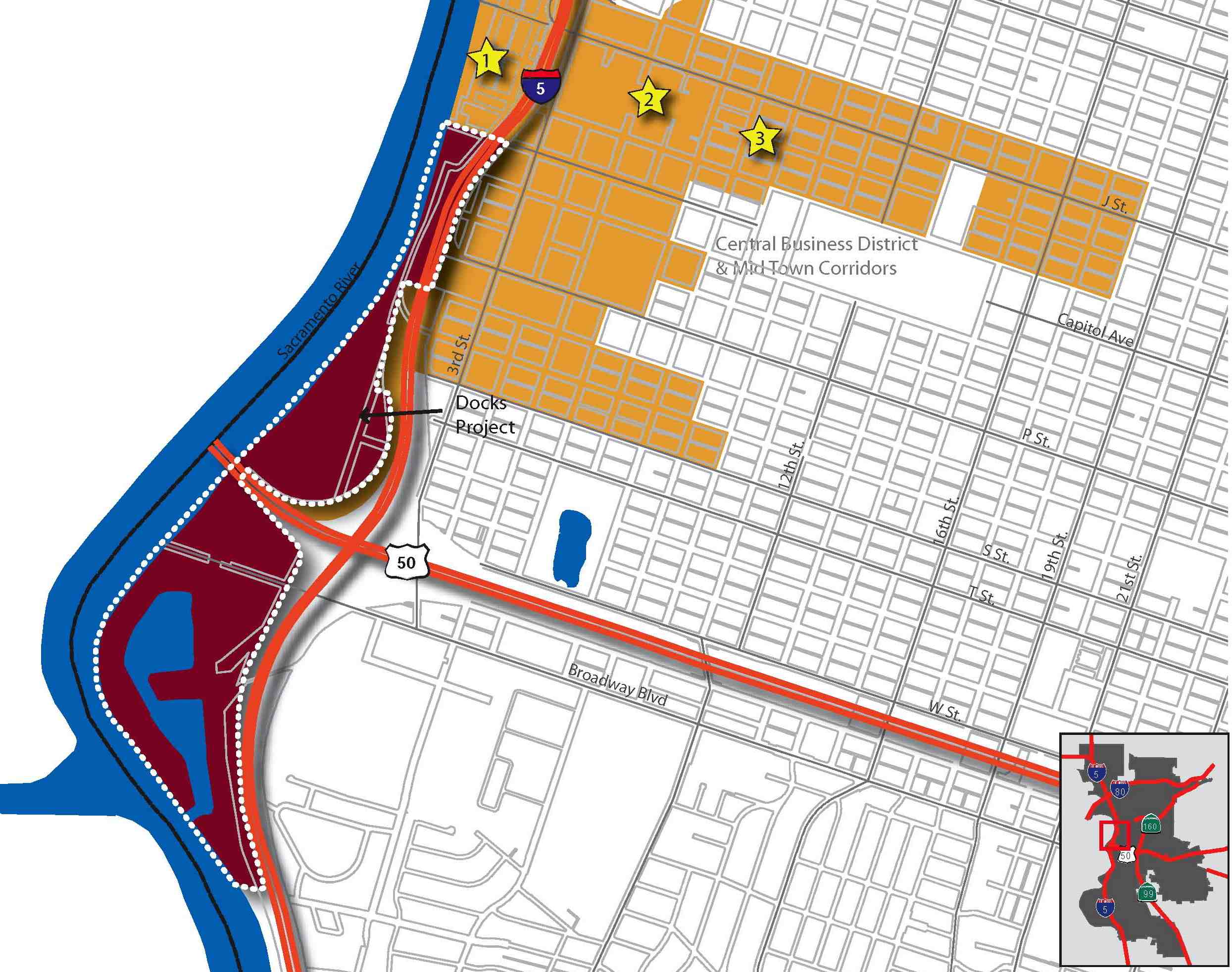 The Docks site is close to (1) Old Sacramento, (2) Westfield Downtown Plaza and (3) the K Street Mall.

Sacramento is a relative latecomer to the beautification (and monetization) of its formerly industrial riverfront. The redevelopment of industrial riverfronts has become a mainstay of American urban planning and design since the success of Riverwalk in San Antonio, Texas, four decades ago. Unlike many waterfront projects, however, Sacramento is emphasizing housing above entertainment and retail uses.

The plan is admirable both for the planning that connects the riverfront site with the existing city grid, and the way that the southern edge of the site will be used for stormwater detention. When the city considers the EIR, the biggest decision to be made is whether to opt for one of three design choices, Variation A-1, A-2 or B. The public will benefit no matter the choice, because all schemes have virtues. That said, the city and its future private development partners face a choice of a scheme that maximizes open space at the expense of new residential development (Variation B), and two others that offer a smaller park and more development, along with more property tax and hotel tax revenues (A-1 and A-2). Both are good enough to be built. But which is better?

Variation A-1 and A-2 are very similar, except that A-2 has more high-rise residential towers. From a purely graphic standpoint, Variation A is a superior composition to the more casual-looking Variation B. I confess I have long harbored a superstition that the design that looks better on paper is often the better design in real life. And, with a few notable exceptions, that belief has been confirmed by experience. But sometimes a nice, symmetrical picture does not yield superior urbanism. The site plan drawing by itself does not necessarily take into consideration the existing conditions on the site, such as hard-to-ignore roadways that rain down soot and noise. 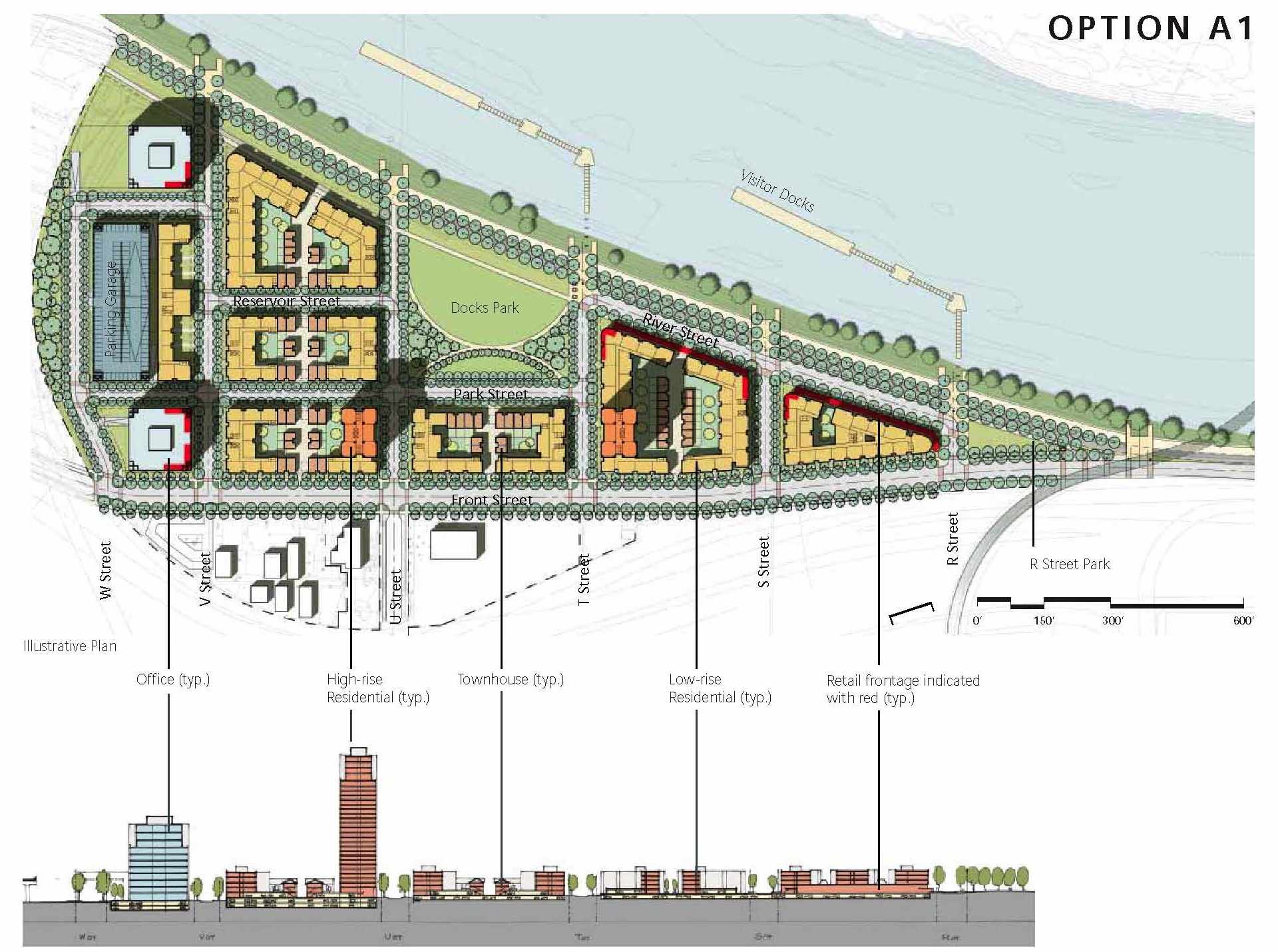 One criterion for judging the two alternatives is to ask which takes the biggest step toward a successful pedestrian environment, where people set the scale and human movement sets the pace.

Variations A-1 and A-2 (again, they are almost identical) are pretty pictures, for what it's worth.  I like the way that planners have routed traffic around the block-sized park, allowing the park to open directly onto the river without any barriers between the two. The scheme is also more urban (in this sense, formal) and far more dense than Variation B.

I'm of two minds about the park. On the plus side, the park seems a comfortable size. Being surrounded by buildings on all sides also helps to give the open space a sense of form.

But why such a small park? What are the design priorities here? If the riverfront is truly a regional attraction, why is Sacramento packing this waterfront location full of housing  especially in light of the 12,000 units approved as part of the nearby rail yards re-use project? Might it be preferable not to max out the number of residential units and the revenue-capture-potential in the Docks development project to take full advantage of the riverfront location? 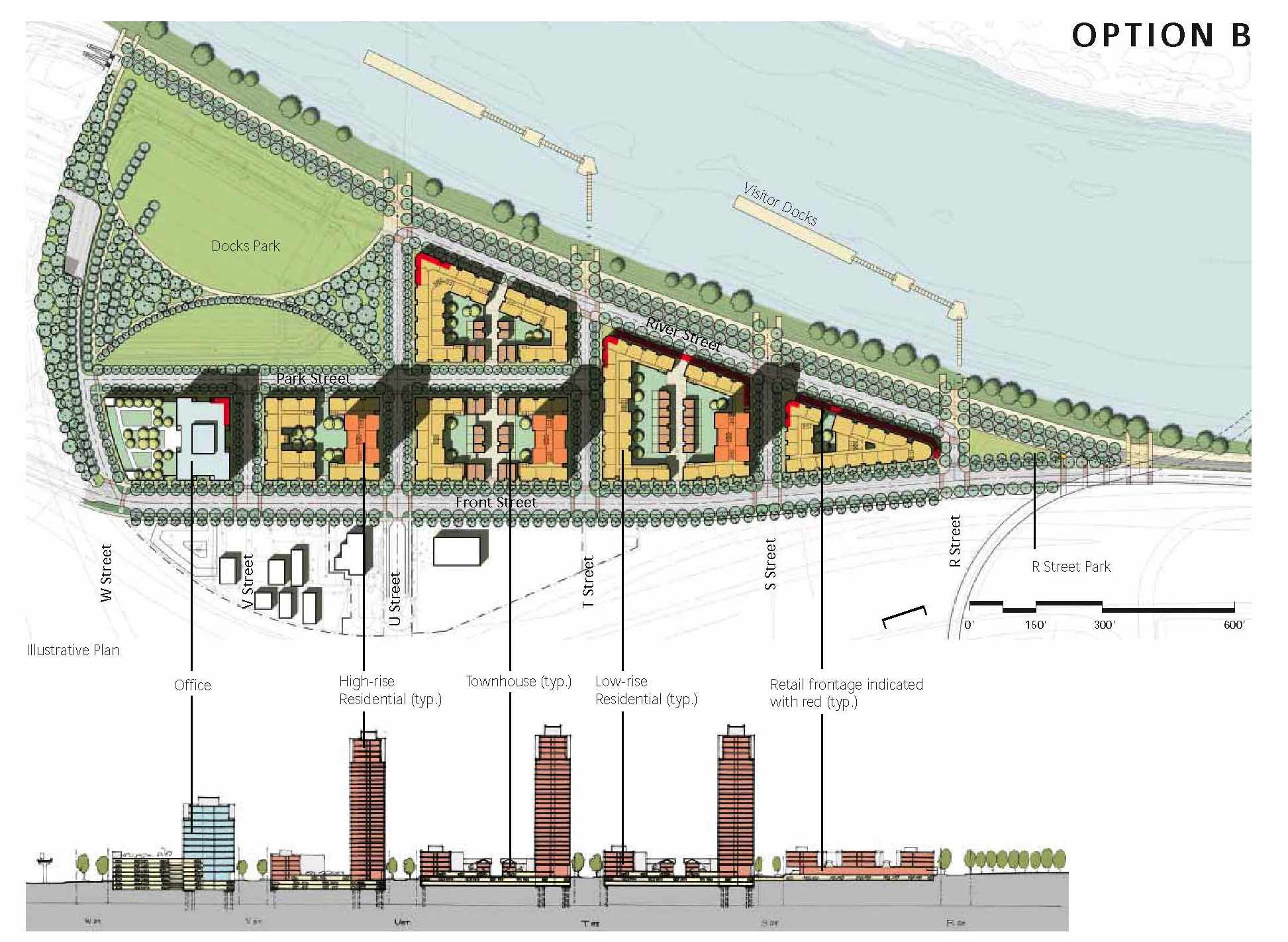 Variation B is far less elegant as a drawing, lacking the formalism of Variation A. Less development is promised in Variation B, in large part because a third or so of the site is set aside for a large-scale, regional-sized park. Beyond offering far more in open space, Variation B is also interesting in the way it seems to pick up on existing conditions. The outer edge of the park, for example, is the freeway structure itself. This decision integrates the freeway into the composition and makes a negative into a positive. Variations A-1 and A-2, in comparison, merely turn their backs on the freeway and pretend that it does not exist.

Assuming that the naked freeway structure would not make a good park wall, we will need to build some fence or enclosure to partly hide the freeway from view. An inventive landscape architect could make that wall into something visually interesting, covering parts of the freeway structure while allowing others to remain visible. This is a great architectural opportunity.

The biggest sore point in Variation B is the traffic planning, which requires drivers to make turns on acute angles. Granted, the Docks is not supposed to be a thoroughfare, but this looks like a miserable place to be stuck during rush hour. On the other hand, we are facing a park and a river, and the need for streets laid out with Teutonic regularity does not extend all the way to the Sacramento River.

Verdict: Either Variations A-1 and A-2 is an easy winner, while Variation B could become something extraordinary, if the designers are up to it. Despite my reservations, I vote for Variation B. I predict the city will opt for Variation A-1. The city will benefit in either case and the orphan of downtown will become a golden child; the leftover will become a main course. In this recessionary time when local government tends to think small, the Docks project is one of the projects that makes Sacramento the state's most interesting downtown area of the current moment.