You are here: Home » Articles » Sacramento Puts Pedestrian Mall Out to Pasture

As much as some planners might not like to admit it, sometimes it seems that the only thing worse than a choked with cars is a street devoid of cars.

Forty years ago, Sacramento's K Street Mall  three blocks of prime downtown real estate not far from the State Capitol  was closed off to vehicular traffic as part of a trend that swept downtowns across the country. The premise was simple enough: the absence of cars would increase foot traffic. But  as in other cities -- that foot traffic never materialized in Sacramento  and merchants and planners in the vicinity of the mall have been clamoring for the return of cars for decades.

Last month, they finally got their wish. City officials hope that re-opening of K Street to cars will be the catalyst for a downtown revitalization that, though palpable, has been hindered by the ghost town in the heart of what should be a vibrant city center. 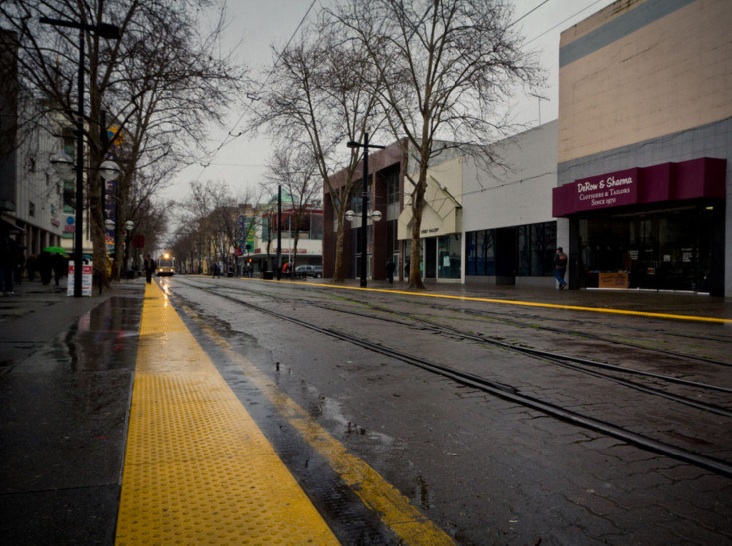 "It has come up off and on at least over the last 20 years," said Sid Garcia-Heberger. "It was always something that seemed impossibly expensive and difficult from a traffic planning point of view. So it never really got traction. This time around, the sun, moon, and stars aligned, and here we are."

The new K Street features extra-wide sidewalks and only two lanes of traffic, which is shared between vehicular traffic and a segment of the city's light rail system. K Street therefore is not expected to become a major thoroughfare but will nonetheless restore what planners consider to be a balance between pedestrian friendliness and the activity that naturally comes with cars.

"It's not enough for a city to simply close a portion of its streets to vehicular traffic; the land uses and streetscape must be reconsidered to accommodate pedestrian activity and safety," said Jessica Schmidt, a planner who has conducted research on pedestrian malls.

The failure of the K Street Mall stands in stark contrast with successful pedestrian-only streets across the country. Burlington, Vermont; Aspen, Colorado; and Boulder, Colorado, have all created successful outdoor spaces in the hearts of their respective downtowns. And, Santa Monica's bustling Third Street Promenadethe gold standard for pedestrian mallsdispels the notion that Southern Californians refuse to walk. Meanwhile, New York City has famously closed off stretches of Broadway to traffic, creating instant urban plazas with little more than paint and inexpensive outdoor furniture.

However, like many other pedestrian malls  including those in Redding and Fresno --  failed to hit on the right formula. Rather than attract pedestrians seeking an unimpeded stroll, K Street repelled them with its emptiness.

Indeed, without a thriving commercial district in the first place, a pedestrian mall cannot create foot traffic. It reflects the surrounding environment but is not a catalyst for change. In the case of Sacramento, everyone who should have been visiting K Street was at home on the outskirts of the urbanized area.

"You not only have the competition from the suburbs but you also have the general decline of the downtown," said Sid Garcia-Heberger general manager of the Crest Theater, a historic movie theater and performance space.

Heberger said that without incidental traffic passing through K Street  enabling drivers to, for instance, see the Crest Theater's marquee or the display windows of shops  some Sacramentens hardly knew that there was a street they could walk down. And at nighttime, without the lunch crowds from nearby offices, K Street was nearly empty.

"Property owners and business owners have wanted visibility for their businesses for a long time, and after 42 years we're able to give them that visibility," said Leslie Fritzsche, downtown development manager for the City of Sacramento. "People don't even know that they're there."

Despite the success of some pedestrian malls, the story of K Street is hardly unique. Pedestrian malls arose at a time when populations were shifting dramatically towards the suburbs, and planners did not necessarily know how to maintain organic urban places as they emptied out.

"Many downtowns were closed to vehicular traffic to try to recreate suburban shopping mall conditions in an urban setting and Main Streets were unable compete with their newer, shinier counterparts, " said Schmidt. Indeed, in Redding the city put a roof on the mall so that it completely mimicked a mall.

Planners in many other cities have come to the same conclusions as those in Sacramento did and already taken down their bollards.

"I think that pedestrian malls were a bit of a cliché when they were implemented in the 1960s," said Steve Davies, Sr. Vice President at the advocacy group Project for Public Spaces. "Most have been retrofitted in some way or another."

Are Sacramento planners committing heresy by inviting traffic? Davies insisted that the demise of pedestrian malls does not contradict the movement towards pedestrian-friendly environments that many urban planners are advocating and that new laws, such as Senate Bill 375, are promoting.

"There's nothing wrong with cars. It's all about a balance with cars," said Davies. "Streets are multi-functional places. They have to serve a variety of uses for light rail, pedestrians, cars, bicycles.it's a mix that needs to accommodate all sorts of diverse functions. It's not all sitting on benches and looking at trees."

Davies noted that even with density and activity, an entirely closed-off street does not necessarily appeal to pedestrians, who may consider the space to be too open.

"There's something psychological," said Davies. "When you look at how people actually walk along pedestrian malls, they cling to the edges and the storefronts like it's this ghost street in the middle." He noted that Santa Monica's Third Street Promenade includes a "fake street," which runs down the middle and gives pedestrians a defined space in which to walk.

The design of the new K Street attempts to strike a balance between the space occupied by cars and trains and the space open to pedestrians.

"We wanted to make sure that the pedestrian experience wasn't changed and that they still had opportunity for wide sidewalks and all of the aesthetics that a wider sidewalk provides," said Fritzsche.

The re-opening of K Street is not expected to spur trafficfoot or otherwiseall by itself. The city has struck an agreement for a major mixed use development in the 700 block, and officials are also hoping to revitalize the suffering Westfield mall, itself a remnant of 1960s urbanism, at the foot of K Street.

"We certainly would like them to do a little bit more and turn it inside-out more so that it's facing the letter' streets more effectively, said Fritzsche. She said that the arrival of a car dealership and the expansion of a fitness club are positive signs.

In the meantime, stakeholders on K Street are eagerly waiting to see how Sacramentans respond to the resurrected street.

"We definitely are going to have some learning curves. I think people are not quite used to the idea that it's a street," said Heberger. "Overall it's pretty exciting to look out and see cars going by."