(The following is a harangue by an imaginary resident of San Ramon addressed to the author of this column, in response to an earlier article he had supposedly written about San Ramon City Center. The ambitious mixed-use project (office, retail, housing and hotel) is to start construction in early 2009 in this city of 50,000 people in the southwest corner of Contra Costa County. Residents of San Ramon, which incorporated in 1983, have long expressed the desire for a conventional downtown area. Of the 39 acres to be developed, 17 belong to the developer, while the city owns the remaining 22, most of which the city bought from the developer to provide some seed capital for the project. The San Ramon City Council approved the project unanimously in December 2007, less than two years after Sunset Development first proposed the mixed-use endeavor. Please note that the proposed development adjoins the developer's existing Bishop Ranch office park. We go now to the harangue.)

"What on earth is the matter with you? Isn't anything good enough for you? Really, I think you've got issues.

"I mean, here's a project that meets just about every requirement you have ever asked for in urban design, or pretty darn close. San Ramon City Center has a regular street grid, and the city has excused the project from its set-back requirements, so most of the buildings can line the sidewalk. We have a good mix of different uses, including housing, office space, a new city hall, retail and a hotel  all to be built by our native son firm of Sunset Development. In terms of sustainability, this project is so green, it's practically purple.

"Yes, it's not terribly exciting, but aren't you the guy who said that urban planning was not meant to be entertainment, and that urban designers should not be afraid of being a little bit boring? Make up your mind!

"True, this new City Center is nothing more,' as you say in your condescending way, than an extension of a suburban business park.' And what's the matter with that? You yourself always say that suburbs grow up to be cities. San Ramon is growing up. So what's your point, bobble-head?

"I acknowledge that it's hard to reinvent a suburban office park into a downtown area. And it is true that it is challenging, very challenging, to make a walkable street out of the regional highway known as Bollinger Canyon Road. I think our architects, Cooper Robertson of New York, have done a very good job in making the wide roadway feel narrow by planting a median strip in the middle of the street. And it's true that the football-field-sized plaza at the main intersection will probably look pretty big. That's why the architects activated' the space, which you charmingly refer to as an urban dead zone,' with an outdoor café and one of those fountains that surprise you, because you don't know when the water is going to spray up! Really, kids love that sort of thing. Who gives a rat's behind what you find convincing'? You're not the client! We are. 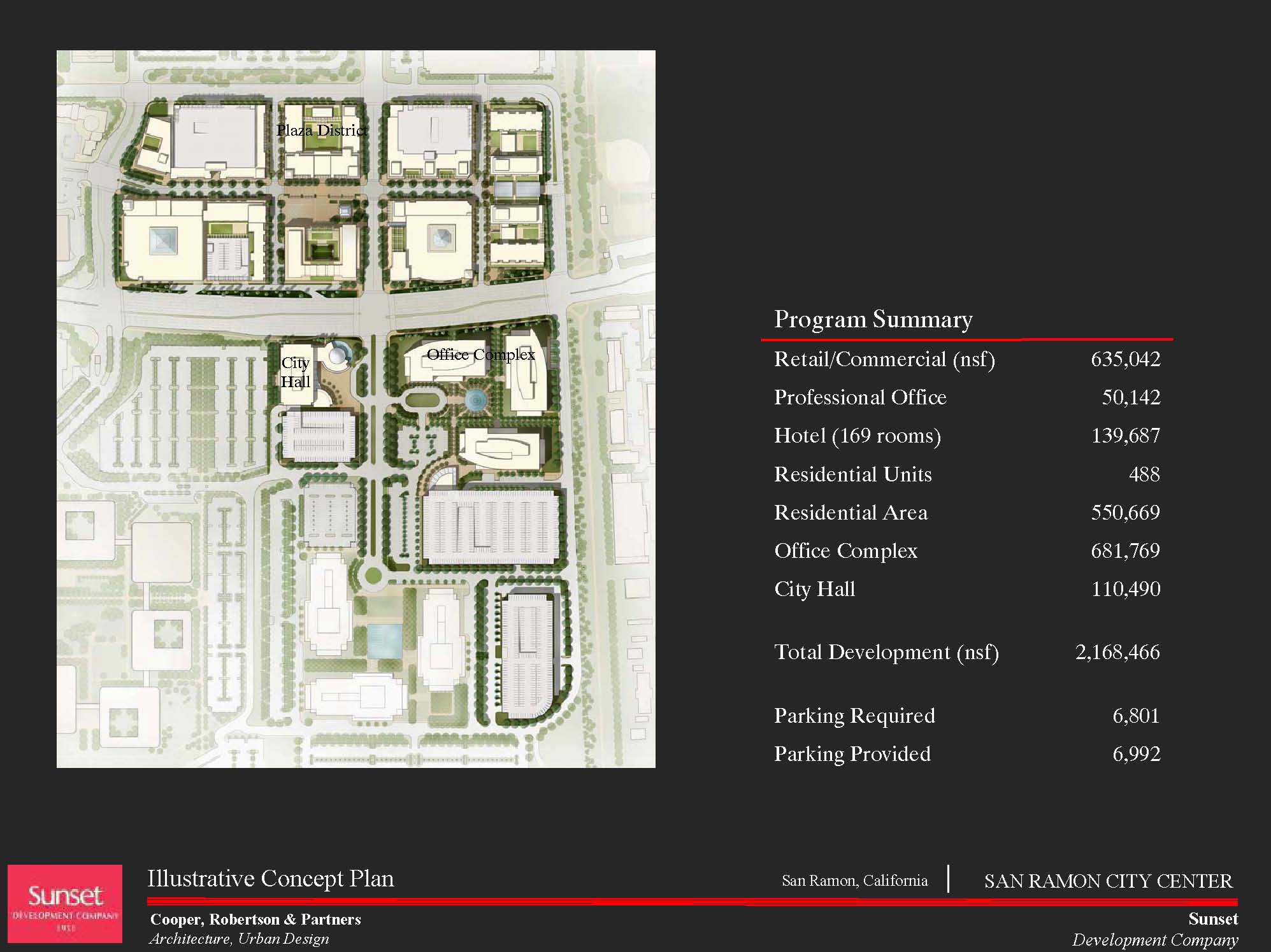 "I grant that you have a point, that the wide street is really a suburban thoroughfare, designed for the convenience of motorists and office tenants, not for the comfort and convenience of people on foot. To paraphrase a former secretary of defense, you design cities with the streets you've got. We've got a wide street, smarty. I don't like your suggestion of putting diagonal parking on either side as a means of narrowing the street. We don't want to slow down traffic, do we? Oh, we do? Well, why don't you slow down traffic in your own community and see if that improves the quality of your life!

"And while I'm at it, I didn't appreciate your crack that San Ramon City Center doesn't look very much different than an office park from the air. That's simply not true: An office park would have much more landscaping around all the buildings, while the office buildings here will just have a little sward of grass surrounding them. And I don't think it was appropriate for you to infer' that the grassy setbacks around the office buildings means that the developer has not gotten away from its suburban mindset. I don't really care that office buildings in San Francisco don't have grass all around them. Too bad for them. I like grass.

"But what really ticks me off is the way you lampoon the main commercial block, which we call the plaza.' It is not a warmed-over lifestyle center.' It is a shopping street. What's wrong with the street being inward looking,' as you call it? I don't know about you, but I don't feel like buying shoes right next to the city's busiest, fastest street. It would be like listening to your iPod at the Daytona Speedway. Vroom, vroom' while you're trying to do something else. I don't think so. 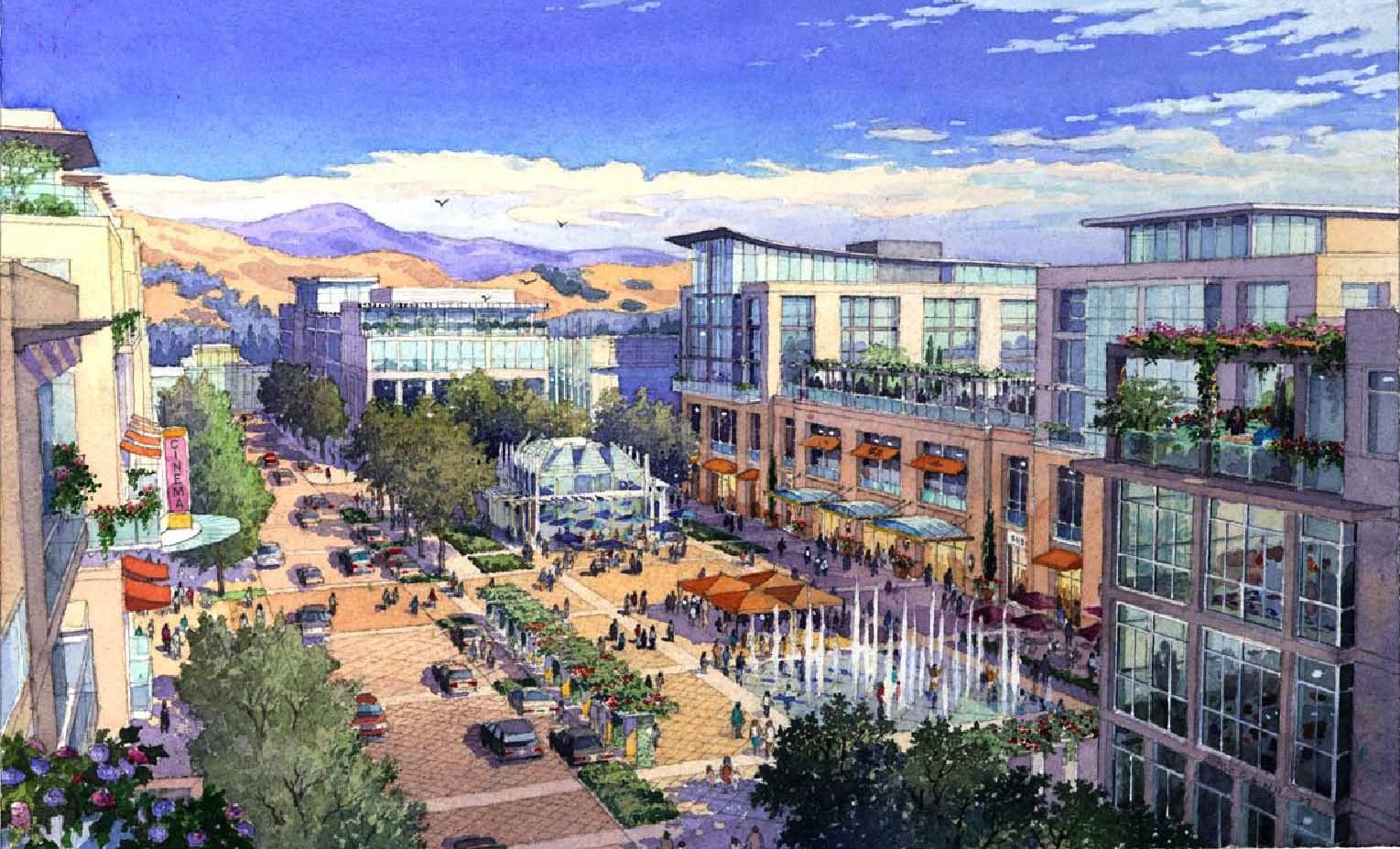 "What burns me up the most is when you say the developers neither understand nor are in fundamental sympathy' with urban goals. Or when you say that San Ramon City Center is really just pretend urbanism,' or, as you say  and this is really unforgivable  a kind of children's tea-party version of a major downtown area, designed so as not to upset suburban expectations.' We'll, let's see you do better!

"What? I hurt you with that last comment? No, I didn't know you were a frustrated urban designer, and you were only writing to make ends meet until the really big plan' comes along. Oh, your lower lip is trembling! Oh, don't make those puppy-dog eyes at me! You know I can't resist that.

"Yes, yes, I'll take you to dinner. But you've got to promise to behave and not poke any more fun at San Ramon. We're a young town. You should be proud that we're making the effort. Now, no more talk of urbanism. We're going to Chipotle."