Three years of subterranean excavation are supposed to lead to steel beams for a five-story building that will begin to rise in 2014.  When  completed in 2017, the four-block-long transit center is expected to become a civic and regional landmark, with a large rooftop park, surrounded by numerous skyscrapers and a pedestrian-dense office, retail and residential community. Project boosters are referring to it as the Grand Central Station of the West.

San Francisco officials are hoping the transit center helps redevelop the surrounding area into the densest neighborhood west of the Mississippi.  It's a far cry from what was once a light industrial neighborhood in the shadow of the city's downtown, located only a few blocks way. But the area has benefited from city policies that encourage development to migrate south from the city's financial district, as well as development sparked by the removal of the nearby Embarcadero Freeway after the 1989 Loma Prieta Earthquake.

The new transit center will rise on the same spot as the city's Transbay Terminal, which served commuters from 1939 until 2010. The old Transbay Terminal was a rundown, forlorn structure on Mission Street, where streetcars once ended their routes across the Bay Bridge.  Starting in the 1950s, the terminal was strictly used by  buses, which arrived from throughout the entire Bay Area on special freeway offramps.

But under the guidance of a Joint Powers Authority, composed of San Francisco officials and the Bay Area transit districts that used the old facility, a new terminal, with a new name--the Transbay Transit Center--is now being built at a cost of $4 billion.  The new center is supposed to bring together 11 transportation systems, and serve 45 million people a year. Some of the transportation systems don't yet service San Francisco, and funding for many of the projects isn't yet secured.  But project planners are thinking big.

To encourage the transit-oriented development, the city has created a plan for 40 acres around the transit center, which includes generous upzoning of commercial properties, planned retail corridors, and pedestrian friendly amenities such as wide sidewalks and alleyways lined with townhomes.  Much of the new development is planned for land freed up by tearing down parts of the Embarcadero Freeway and one freeway off-ramp that once served the transbay terminal, according to Courtney Pash, assistant project manager for the Transbay Redevelopment Project Area, which is a successor agency to San Francisco's Redevelopment Agency.

The revitalized area around the Transit Center is expected to have 4,600 housing units, with 25% of them affordable units. Many of the residences will be at the southern end of the redevelopment area along Folsom Street, complementing new residential construction in nearby Rincon Hill.

Six million new square feet of new commercial and office space will be created, much of it in high rises. The skyscrapers are will be slender, to minimize shadows.

The signature high-rise will be on Mission Street property that once was the front entrance of the Transbay Terminal.  Construction is expected to begin soon on a 1,070-foot-high, 60-story glass tower, designed by the firm of Pelli Clarke Pelli. The building, known as the  TransbayTransit Tower, will dwarf the city's Transamerica Pyramid by more than 200 feet when it is completed in 2017.

Across the street from the Transbay Transit Tower, two additional towers are supposed to rise, with 1.2 million square feet and 605 condominiums, in a project spearheaded by TMG Partners. The two towers will be almost as tall as its neighboring tower, with a 59- story office tower and 56-story condo tower.

Stephanie Reichin, a spokesman for the Joint Powers Authority, said there are  five other new high-rises planned in the area.

The center's construction during the recession may have jump-started development in the area, which had seen many high rises built during before 2008.

"A lot of development was planned prior to the recession and then stopped when it hit,"Reichin said. "When we started construction of the transit center in 2010, it was a sign of economic recovery and a catalyst for many developers in the area."

It also helped that zoning increased to allow bigger, taller buildings. "For some of the parcels in the plan area, the allowable height was increased," Pash said ."The goal is to increase the density."

"The goal for the area has always been to extend downtown south of Market," she  said.

A successful redevelopment is evident a few blocks from the transit center, at Yerba Buena Gardens, where a park, a convention center and several museums and hotels all expanded the downtown core.

Fears that the increased construction near the transit center might not withstand earthquakes have been addressed, Pash said.

"All buildings have to meet the city's strict earthquake standards," she said. "The terminal and Transbay Tower exceed the city's standards."

The office vacancy rate in San Francisco is currently at 8.7 percent, as San Francisco reaps the benefits of being at the northern arc of Silicon Valley.  The new transit center may also make commuting easier for the thousands of San Franciscans who now commute south to San Mateo and Santa Clara County, where many high tech companies are located.

Plans for the new transit center envision tying together 11 different transportation systems, although not all have yet been funded   One examples is California's high speed rail, with bullet trains beginning their journeys to Los Angeles there. But funding fights over that project, and opposition to its operation on the San Francisco Peninsula, have raised questions about whether it will ever be built.

In addition, Amtrak is supposed to end its lines at the transit center, if Amtrak decides to deliver rail passengers to San Francisco. Caltrain, the peninsula's three-county rail service, is also supposed to terminate there, if money is ever found to extend the rail system from its current San Francisco terminus about a mile away. Plans also call for a people mover sidewalk to speed passengers from the center to a BART station in downtown's Embarcadero Center. 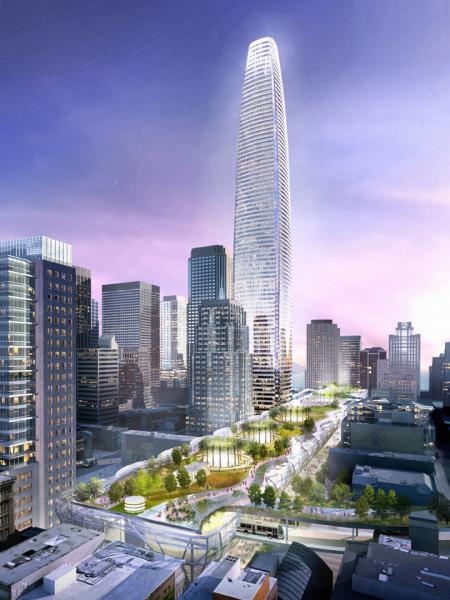 TODAY at 5pm! Josh Stephens on The Urban Mystique at SPUR
Join our friends at SPUR 5pm this evening, Tuesday 19 January, for a conversation about the ineffable complexities that make all cities, be they in California or anywhere else, wondrous, maddening, and fascinating.