It's not quite the Golden Spike, but the completion of Phase I of the Los Angeles Expo Line light rail marks a momentous occasion in the history of westward rail expansion.

Built on a former trolley right-of-way, the Expo Line connects downtown Los Angeles with the Westside via rail for the first time in decades. Whereas Los Angeles' old Pacific Electric Railway had been built in virgin territory in order to spur new development, the Expo Line is but a filament, woven into built-up neighborhoods. Expo-adjacent neighborhoods are no streetcar suburbs, however. Now that the Westside once again has the "T," efforts to figure out the "OD" have only just begun.

The opportunity to explore a whole new typology on the Westside has planners and developers excitedï¿½and anxious.

"There are opportunities that exist along Expo that don't exist along other proposed or recently constructed alignments in California," said Abigail Thorne-Lyman, Director of the Center for Transit-Oriented Development at the transit advocacy group Reconnecting America, which published a major report on TOD in Los Angeles County in 2010. "But there's these issues of equity that need to be somehow addressed and mitigated."

On its eastern end, the Expo Line serves ideal destinations: downtown and the University of Southern California, with over 50,000 students and staff. The Expo Line cuts transit travel time between downtown and USC to seven minutes from almost a half-hour. On the north side of campus, a massive planned residential and retail complex, The Village, is being touted by USC officials as a 10-minute walk from the two stations (See sidebar "Design Glitches Add Precious Minutes to Expo Trip".) 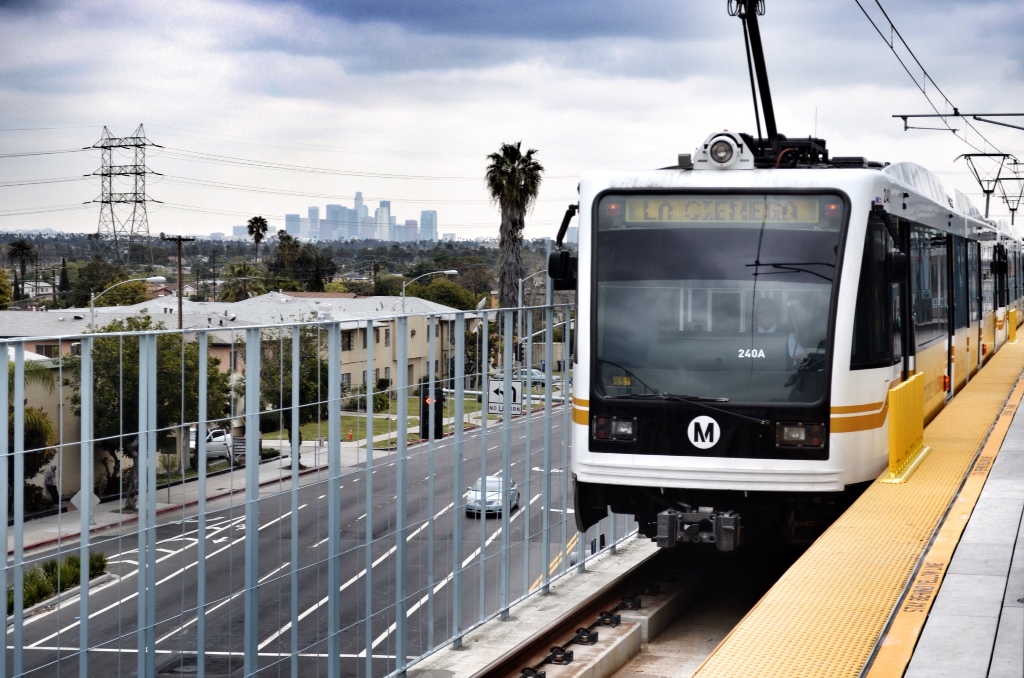 Heading west, the Expo Line presents seemingly ideal opportunities for transit-oriented development. Residents who live along the line might never have to endure the 10 Freeway ever again. A second phase is expected to connect to Santa Monica in 2015.

Los Angeles City Council Member Bernard Parks, whose district includes much of the Expo Line's route, envisions mixed-use development at higher densities than the area currently has. He said he supports zoning changes to allow more mixed use development and higher elevations. Currently, land use in the area is segregated, with commercial strip malls clustering at major intersections and residential neighborhoods off the major boulevards.

Roble estimated that Phase I, which cost $930 million to construct, could prompt the development of up to 6,000 new housing units in the area by 2030.

Unlike many of the great east-west boulevards in Los Angeles, the line's namesake, Exposition Boulevard, is a secondary thoroughfare fronted largely by relatively low-density residential uses and even some light industrial uses, such as auto yards and recycling centers. The line's six stations between USC and its current terminus at the intersection of Venice and Robertson boulevards do not have ready-made urban villages.

"In terms of the retail and office development, the opportunities are limited precisely because the stations along the Expo Line probably cannot compete with the adjacent downtown districts that we have," said Roble. Roble added that commercial development will likely include "neighborhood-oriented retail uses and small offices, such as doctors offices, dentist offices and others that the community relies on a daily basis."

Inserting new development will, therefore, be incremental and subtle.

"I think the community fully endorses development as long as development is not overdoneï¿½as long as it's bringing amenities to the general public," said Council Member Parks. "I don't think we'll have a drastic change in the types of communities in the district."

The main challenge is that of finding parcels large enough to make transit-oriented developmentï¿½either mixed use or wholly residentialï¿½worthwhile. Developers could attempt to assemble parcels, but in order to get the acreage they would need, they might have to negotiate with dozens of small landowners.

"There's a lot of small, teeny parcels and there's all this weird industrial property, and it certainly seems like it could be refurbished, but that's going to be a challenge," said Hornstock.

This process will, of course, have to take place without the assistance of a redevelopment agency.

"With the fall of redevelopment, we've lost a significant tool in the process to assemble large enough properties together to make it meaningful and worthwhile to do a larger-scale project," said Tom Wulf, a senior vice president at Lowe Enterprises. Wulf's firm has a development agreement in place for a large mixed use development, including a hotel, 150 residential units, and nearly 200,000 square feet of office space, at the Culver City terminus.

(Several other major TODs are planned for the Culver City end of the line, where larger parcels have been available and the city has been aggressively promoting development.)

Moreover, Roble said that many of the lots directly adjacent to the line are relatively shallow. So, he said, much of the new development associated with the line could take place several blocks from the line itself.

The Los Angeles Department of City Planning has been developing what it calls a Community Plan Implementation Overlay (CPIO) District, which superimposes certain rules on TOD-friendly areasï¿½generally a quarterï¿½mile radius around a stationï¿½without changing the areas' respective community plans. These overlay zones are going in around dozens of transit stations in the South LA planning area, including existing Blue Line and Green Line stations.

Mindful of community opposition to rampant development, planners have devised incentives to promote what they consider beneficial, neighborhood-serving usesï¿½and to gently nudge-out nuisance uses. Roble said, for instance, that a development that includes a health clinic or that installs extra greenery will get certain perks, such as allowances for increased density.

"We will look at elements that have inhibited place-making, such as recycling, tire shops, all the nuisance uses that plague our corridors will now be regulated through the CPIO," said Roble. "The beauty of this overlay zone is that it's a focused element within that community, as opposed to a specific plan that would be very comprehensive."

Roble said that the CPIO will not prohibit unwanted uses but rather will control them by imposing maximum numbers of "placemaking-inhibiting" uses in a given area and making sure that they are spread out.

Though it controls some small parcels along the line, the Los Angeles Metropolitan Transportation Authority has taken only a tangential role in promoting TOD around Expo. (By contrast, Metro has been a major developer along the Red Line, where the agency has considerable landholdings.) Metro has developed a grant program to help local planners develop and implement TOD plans around its stations, and Los Angeles has received $3.1 from that program to draft a specific plan for Expo.

"Funding is to promote any kind of regulatory change that supports transit oriented development," said Jenna Hornstock, Deputy Executive Officer and Countywide Planning at Metro. "It could be an amendment to an existing plan, a specific planï¿½..anything like that."

Metro officials hope that increased development will equate with higher ridership. However, they acknowledge that, no matter how much TOD is built, not everyone will be riding the train.

"While we're super-excited about the Expo Line and, I think, over time it's going to alleviate traffic, any time you bring in density to the really congested Westside people are going to say you're bringing in more traffic," said Hornstock.

Perhaps the most delicate issue facing planners is that of addressing affordable housing. The Expo Line runs through relatively poor neighborhoods filled with older housing stock. In a city with a chronic shortage of affordable housing, city officials are wary of anything that would displace existing residents. Some affordable housing advocates claim that TOD tends to push out less affluent residentsï¿½who are often the most transit dependentï¿½and lead to gentrification.

"Do we keep the housing stock that's there to preserve the low-income residents or are there opportunities to develop something that's a higher-quality building stock or adding more units near transit in really location-efficient areas?" said Thorne-Lyman.

Parks said that he favors new commercial/residential mixed-use development, which can add amenities while maintaining the number of residential units.

He does not, however, want to be dogmatic about pursuing affordable housing.

Acknowledging that developers find it "excruciating" to seek entitlements and lobby for rezoning when they want to build high-density projects, Parks hopes that the CPIO and new community plans will make the area more welcoming to developers.

"I think developers are often looking for places that they can be certain about the development requirements and what can be built by-right," said Parks.