You are here: Home » Articles » Can Riverside County Still Sell Its Single-Family Brand?

There's no question that Riverside County is still the single-family home capital of California. Between 2010 and 2013, more single-family detached homes were built in Riverside than in any other county in the state  a lot more.

According to the Department of Finance Demographics Research Unit, the number of single-family detached houses increased by almost 9,000 in Riverside County  almost double the number in the No. 2 county, San Diego, and close to triple the number in any other county in the state. Other inland counties such as Fresno and Sacramento had comparable percentages of single-family home construction  about 75% of new units in each case  but Riverside's raw numbers are in the stratosphere.

Every indicator suggests that the market for single-family detached housing in California  and, indeed, throughout the United States  will be on the decline in decades ahead. The combination of demographic and economic change means that fewer people will want single-family houses and many who want them won't be able to afford them.

The now-famous estimates of Professor Arthur C. Nelson suggest that the United States  and, by extension, California  already has enough single-family homes to meet demand for the next 20 or so years. Nelson's numbers are subject to debate, of course, and there's no question that some single-family housing development will continue. After all, even if there are enough houses theoretically available in the aggregate, there are probably still gaps in single-family housing type, size, location, and price. And as we all know, some people just like new houses and are willing to drive a long way to own one.

But this segment of the market is in decline. Indeed, for the first time even, you can even begin to think of it as a niche. And that poses a problem for Riverside County. 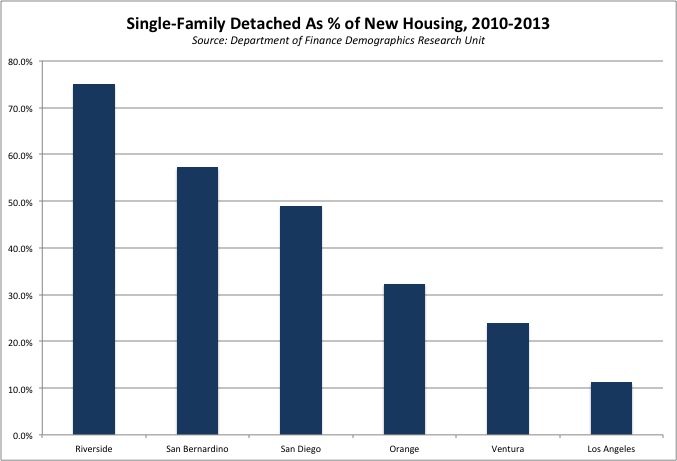 Indeed, the most recent Department of Finance statistics  which seem to tell the compelling story of Riverside County as the single-family mecca  also document the rapid decline in the single-family market. The six counties of Southern California  the five-county Los Angeles market plus San Diego  represent a discrete regional housing market. There's a lot of commuting within this enormous region, but very little commuting in and out of it. And this six-county area represents about half of the overall state housing market.

Between 2010 and 2013, according to DOF, this region added about 59,000 housing units. Of these, only about 38% were single-family detached homes. More than half were apartment and condominium buildings of five or more units. The rest were either single-family attached units or small multi-family buildings such as duplexes.

Think about this for a minute. Riverside County  with about 2.2 million people in 2013  has about 12% of Southern California's population. Riverside has 11% of the region's housing stock, and  all told  about 13% of the single-family homes. Yet during the recent upturn in the housing market, the county captured almost 40% of all single-family construction. In other words, the county kept growing  but only by capturing an enormously large share of a declining market segment.

To some extent, this pattern will probably continue indefinitely. There's definitely a market for new detached single-family homes in Southern California. There aren't very many other places in Southern California where such housing can be built affordably. And there's a long-standing pattern of self-selection within this market segment. For decades, single-family homebuyers have shown a willingness to move to Riverside County and commute long distances  to L.A, Orange County, and San Diego  in order to to maintain that lifestyle.

So there's no doubt that Riverside County can continue to capture a large share of the single-family market in Southern California. It's got brand-name recognition and can probably continue to increase its market share even as the market segment continues to decline for the foreseeable future.

But what happens when Riverside County hits the wall? After all, the remaining available single-family land in southwest Riverside County  along the I-15 and I-215 corridors  is being gobbled up quickly. And even if Riverside doesn't hit the wall soon, does it have to diversify its housing stock in order to remain competitive?

Because underneath all the numbers and trends, there is one intangible: People. Will the people that Riverside County needs to prosper want to live there if the only choice is single-family living? And can the people who live in the county's single-family neighborhoods now  who are getting older and older  continue to live in their houses indefinitely?

The two biggest drivers of the housing market these days are Millenials and aging Baby Boomers. Both are necessary for a region's prosperity. And both are trending heavily toward urban living  in other words, both are trending in the complete opposite direction of Riverside County. So Riverside County faces a choice: focus on the self-selected suburbanites and remain a bedroom suburb; or diversity its housing stock and its selection of neighborhoods to become more competitive with the people who can bring jobs and broader prosperity to the county.

It's worth remembering that, not so long ago, Orange County faced a similar challenge: It was the quintessential bedroom suburb in a rapidly changing world. But Orange County had some advantages that Riverside does not. Jobs were decentralizing into suburban Edge Cities (that's not happening anymore) and the county had a few large landowners willing to move heavily in the direction of employment centers and master-planned communities (which Riverside does not).

Is Riverside up to the challenge? Maybe hip neighborhoods will emerge in certain locations  near the University of California in the City of Riverside, for example, and a few other locations. Maybe aging homeowners stuck in their subdivisions will become creative  doubling up, sharing kitchens, selling each other goods and services in an informal economy, and so on. Or maybe Riverside County will follow the same pattern as many old brand names in mature industries  mining a declining customer base for as much short-term profit as it can extract before the mines are played out.