Whereas a Berkeley resident can cross from exuberance of Telegraph Avenue into the heart of the Cal campus in a few steps, UCLA is an auto-oriented campus surrounded by a moat of driveways, green space, and city streets. Its neighbors are some of the wealthiest and orneriest an institution could ever have the misfortune to live next to. The university, for all its academic heft, retreats from the city, and the city from it.

UCLA was an ironically illustrative venue for a talk by Michael Storper, lead author of "The Rise and Fall of Urban Economies," that I attended recently. Contrary to its expansive title, Storper's study concerns only Los Angeles and San Francisco. Given that both are booming Pacific Rim metropolises, it may be hard to figure out which is the "rise" and which is the "fall." 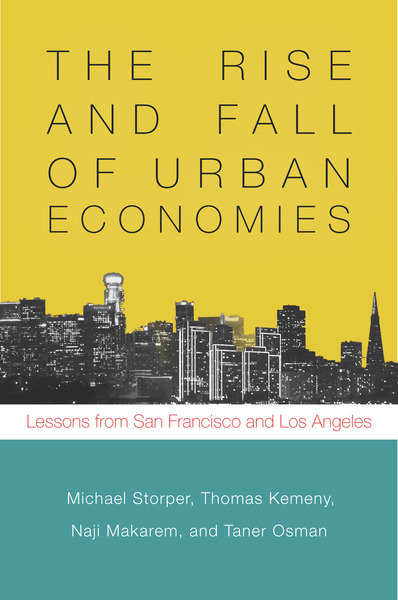 You don't have to have a Ph.D. to wonder: What happened?

Some of the reasons for the divergence of Los Angeles and San Francisco, which he defines by their multi-county metro regions, are obvious. L.A.'s aerospace industry crumbled along with the Berlin Wall. Steve Jobs happened to grow up in Cupertino. Et cetera. Hollywood is Los Angeles' superstar, except that it represents only 2.6 percent of the area's economy, compared with tech's 11 percent in the Bay Area.

Those factors are just the start. For virtually any given job function, and controlling for all sorts of variables, Storper, who teaches at UCLA's Luskin School of Public Affairs, finds that a worker in the Bay Area makes more money and does more complex work than her counterpart in Los Angeles does. In other words, they're not just making more in the Bay Area. They're making better. This patterns holds for educated and uneducated, immigrants and non-immigrants, and it trickles down even to unskilled workers.

These are the statistics that back up San Francisco's smugness. Riveting as they are, they describe the only effect but not the cause.

L.A.'s and the Bay Area's divergence depends largely on what Storper referred to as the "dark matter" of public policy. Lurking behind every data point and every policy are forces like curiosity, relationships, open-ness, diversity, civic self-image, and values. These factors are often disregarded by short-sighted wonks and bureaucrats not because they're not crucial but because they aren't easily quantified.

Storper argues that people in Los Angeles are lousy collaborators. Scholars in L.A. cite each other less often. Patents made in L.A. refer less frequently to other L.A.-based innovations. Los Angeles' great universities ï¿½ UCLA, USC, and Caltech ï¿½ are not nearly as entrepreneurial as Stanford, Berkeley, and UCSF. He cites L.A.'s Amgen as a successful, once-innovative biotech company but says that it's nothing compared to the Bay Area's biotech cluster. And it's in Thousand Oaks -- nowhere near a major university.

Storper's analysis indicates that networks of civic leaders in Los Angeles are often mutually ignorant of each other. The Bay Area Council, the region's preeminent civic organization, is three times more "connected" than its closest equivalent in Southern California, the L.A. Area Chamber of Commerce. I know what Storper means. I've been to events at the Chamber, presided over by civic leaders of a certain generation.

Storper said the phrase "new economy" appears in none of L.A.'s economic development literature in the 1980s. At the same time, San Franciscans were shouting it from the rooftops.

These attitudes are fatal in an era when ideas, and not Fordist production, are the order of the day.

Echoing Enrico Moretti's theories about innovation economies, high-wage jobs generate a multiplier that tends to take care of the workers at the bottom. "If you play to weakness (i.e. poverty) you get a weak economy," Storper said. Interestingly, he said that there's essentially zero good data on the efficacy of any public-sector economic development programs of the last 45 years. He chided Los Angeles' leadership for its obsession with the low-paying logistics industry. A rising tide lifts all boats. Unless the boat is a container ship.

If an individual, firm, or government doesn't have the knowledge or the capital to realize their dreams, so be it. But if they fail because they're not open to the wisdom, energy, diversity, ambition, and creativity of other human beings, well, that's something else.

Los Angeles' economic failing is not just a business failing or a policy failing. It is a moral failing.

What else do you call it when 25.7 percent of residents in the biggest county in the richest state in the richest country in the world live in poverty?

Storper didn't say so explicitly, but L.A.'s economics sins arise, in part, from our built environment. The two regions have plenty in common, especially in their outlying counties. But insofar as the center cities set the tone for their regions, the differences are striking. We have dingbats, setbacks, curb cuts, mini-malls, chain stores, McMansions, Pershing Square, streets like freeways, freeways like parking lots, and other elements of our landscape that push Angelenos away from each other.

How can you collaborate with someone when they're in your way, making your drive longer, pouring pollution into your face? How can you feel as optimistic atop an asphalt sheet as you can strolling down a sidewalk lined with Victorians? How can you make friends when you can't walk to a watering hole? Los Angeles is like a party full of beautiful people who have nothing interesting to say to each other.

Atoning for our economic sins must include being a better Los Angeles.

We might not be able to trade Facebook (headquartered in Menlo Park, with 10,000 employees) for Snapchat (headquartered in Venice, with 200 employees). Nor can we can we trade Google for Disney, or the Transbay Tube for the Sepulveda Pass. But we can emulate some of the Bay Area's urban sensibilities. We can use transit more often. We can build more mixed-use projects. We can embrace public space. We can build to the property line. We can plant trees. We can take advantage of our space rather than squander it. As our city changes, so can its culture.

The great news is that improvement is afoot, with downtown development, new transit, new types of development, and an optimistic corps of young planners. By the time Los Angeles comes into its own, today's tech titans might be old news, just as Northrup Grumman and McDonnell Douglas are today. Something will have to replace them, and maybe they'll reside in Los Angeles. We just need to give them a better home.

UCLA being what it is, many people who should have attended Storper's talk ï¿½ captains of industry, thought leaders, and everyday citizens interested in L.A.'s prosperity ï¿½ are the ones who are least likely to actually have made the trip. Storper was preaching to a choir, mostly of fellow academics and urban nerds.

After the talk there was a reception. Hors d'oeuvres, wine, the usual. It provided a chance to do some of that mixing and mingling that elude us in L.A.

I would love to have stayed. Maybe I'd have developed new ideas or made new connections. But I had to go. My meter was running out.