You are here: Home » Articles » Fetishizing Families: Review of 'The Human City'

I would like to buy Joel Kotkin a beer. I vote we try a gastropub downtown. Or maybe a rooftop lounge. I'll take the subway, and he can take a taxi. That way, neither of us has to drive.

Wherever we'd go, I'd like to invite some of my urban planner friends along. That's because, judging by his new book, "The Human City: Urbanism for the Rest of Us," Kotkin may never have met a planner before.

According to Kotkin, planners today are "largely in favor of cramming people into ever-denser spaces." Kotkin describes contemporary planning trends so you can smell the body odor: "people clustering in ever more crowded cities, living atop each other, may fulfill the ambitions of corporate leaders, urbanist visionaries, and planners."

Kotkin has long been a contrarian and critic of contemporary planning - sometimes a perceptive and welcome one, especially when urbanists, myself included, have gotten too cute or too smug. "The Human City" is probably his most comprehensive critique and surely his most off-putting. 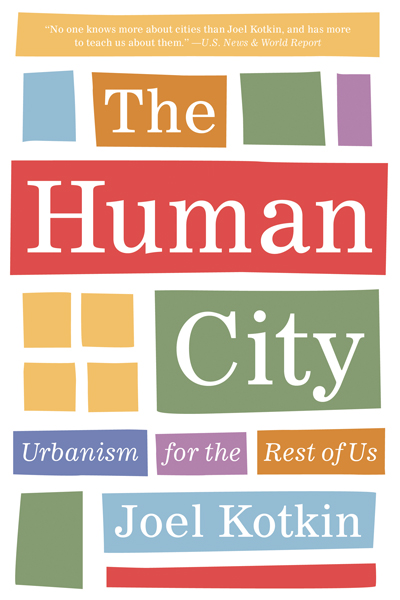 Normally, provocative claims that form the basis of an entire book would warrant extensive citations, surveys, data, quotations, interviews, analysis, and literature reviews. Kotkin alludes to "scores of interviews and-survey data" but reports none of it but for occasional factoids. By keeping them "anonymous," Kotkin gets to mischaracterize planners and crusade against nonexistent threats.

Kotkin digs at "creative class" theorist Richard Florida for being a "retro-urbanist" (whatever that means), and credits New Urbanists for favoring "a somewhat human scale." Most surreally, though, Kotkin suggests that the theories of early 20th century visionary Le Corbusier "are widely shared-by many urban thinkers today," as if everyone still wants to build towers in parks. That's what they were doing in the 1960s. In fact, legions of planners have been working for decades, by promoting infill and the like, to undo the damage that the Corbusians did. That damage has little to do with density per se; it has to do with the evisceration of street life.

"The Human City" mainly concerns American cities, though it takes an early one-chapter detour into "megacities" of the developing world. This enables Kotkin to introduce a terrifying statistic: Dharavi, the densest slum in Mumbai, has 1 million people per square mile. Kotkin presents this as a cautionary tale, never blinking in his accusation that planners in the United States view Dharavi as a model. Never mind that Dharavi is an illegal settlement on nobody's blueprint.

You'd have to be a serious antigovernment fanatic to think that any bureaucrat would favor that kind of cityscape. You'd also have to be terrible at math. If the entire population of the United States crammed within the city limits of Los Angeles, they still wouldn't achieve 1 million people per square mile. (Especially not with all the botox.) Interestingly, the density of Mumbai as a whole is roughly equal to that of New York City as a whole, at roughly 28,000 people per square kilometer.

And yet, Kotkin says that "planners" celebrate Dharavi's density. He includes Harvard's Ed Glaeser, who is actually not a planner but an economist and the kind of free-market thinker about cities that Kotkin ought to like. Kotkin doesn't actually quote Glaeser directly, though, so I emailed Glaeser. Glaeser confirmed that he believes in the economic potential of megacities. Kotkin just left out the part about how Glaeser "warn(s) of their dangers - the demons of density."

As a gradient and not an absolute, density is relative. It's not like we have to choose only between formless void and black hole. To favor greater density in, say, Kansas City (1,474 people per square mile, in the center city, or one-tenth of 1% of Dharavi, ) or Jacksonville (1,142) means favoring "greater than what is already in Kansas City or Jacksonville." It doesn't mean "greater than Mumbai."

(Kotkin proposes a breezy solution for India: it should develop its mid-sized cities. That's a swell plan, except that it ignores the ultra-corrupt, hyper-bureaucratic entity known as The Government of India.)

But enough of the developing world. "The Human City" mentions it mainly to scare the bejesus out of "us" and make us thankful for America's abundance of bedroom communities.

The "us" in Kotkin's divisive title refers to nuclear families: husbands and wives who dutifully bear sons and daughters. They are, claims Kotkin, the ones whom cities ought to serve. They have no use for monumental statements like towers and superblocks nor for fripperies like parklets, bike lanes, street festivals, and loft conversions. And they certainly don't want their children having to share personal space with "them," whoever "they" may be.

Families are people too, though. It's not unreasonable to claim, "the question of what families need and prefer should be central." But Kotkin explores this question only as far as his preconceptions will let him.

In asserting the preferences of some 122 million people (including many children who probably had no say in the matter), Kotkin makes no effort to distinguish desire from resignation. The status quo does not tell us whether they "want" to live in suburbs or whether they are merely willing to do so because that's where most housing units have been built over the last century.

Kotkin's veneration of the suburbs centers on three reasons: typology, typology, typology. Kotkin insists that families inherently prefer a "small home in a modest neighborhood-where children can be raised." Adorable, right? To hear Kotkin tell it, a house in bankrupt San Bernardino is always more family-friendly than an apartment in booming Koreatown. I'm sure that's true for some parents. Others are happy for their kids to have ready access to culture, mobility, astounding diversity, and neighbors who are less likely to be cooking meth in their garages.

In writing about suburbs, Kotkin is at his most appealing and most convincing when he's describing their hidden diversity or celebrating the small businesses that thrive there. He rightly points out that, with the dispersion of job centers, it's not all hour-long commutes on clogged highways. Meanwhile, he also has a legitimate critique of some progressive cities that "are actually becoming whiter and less ethnically diverse as the rest of the country, particularly suburbia, diversifies." He's also written perceptively on America's coming population growth.

Kotkin undermines these observations by concocting a rivalry between suburbs and center cities - going so far as to proclaim "the war against suburbia"  -- and by equating suburban living with families while equating center cities with hipsters, singles, the wealthy, and the foreign wealthy. (He scarcely mentions the urban poor, many of whom also are families.)

These are the inhabitants of cities that Kotkin calls, variously, consumer cities, legacy cities, elite cities, and, most damning of all, "luxury cities." Kotkin cites compelling demographic data indicating that in some of these cities - especially San Francisco and Manhattan - children are disappearing from the census data. Luxury cities are too expensive for families and, of course, they're too darn crowded.

For a free-market guy, it's odd how Kotkin ignores the true meaning of high real estate prices: that demand is outstripping supply. Believe it or not, a great many people, families and singles alike, "want" to live in Los Angeles, Seattle, San Francisco, Washington, D.C., and New York City.

If high prices are bad and density is bad, cities are in quite a pickle, aren't they?

Kotkin clearly thinks that cities shouldn't build more high-rises and other multifamily dwellings. Of course, plenty of cities can accommodate more suburban-style houses, which is fine. But they aren't the cities that Kotkin is concerned about.

He willfully ignores the predicament that the highly desirable like New York, San Francisco, and even Los Angeles are facing: They have basically no undeveloped land. Either they build multifamily or they build nothing at all. Kotkin imposes on them an impossible choice - and blames planners for failing to sort it out.

Planners in center cities focus on downtowns, multifamily housing, commercial pockets, and certain amenities because, well, that's what they have to work with. Density is what a city is - especially "luxury cities." Being for or against density is a silly question. Managing density and making it work, for families and everyone else, is the real question.

In truth, a suburban preference doesn't necessarily connote a preference for suburbs; it connotes a preference for things that suburbs tend to offer. No matter their densities, cities can, if they try hard enough, meet suburbs halfway, with better schools; affordability (per unit if not per square foot); safety (unban crime is generally down); and even "community" - as long as your definition of "community" doesn't equate only with "middle class white people." Americans might prefer suburbs less if they had more great cities from which to choose.

By demonizing big-city planners, Kotkin ignores another crucial part of the housing story: they have nothing whatsoever to do with the production of suburban housing.

Kotkin writes, "Urbanists would be far better off if they considered taking a more human-city approach: improve life not only in the core, but in the extensive areas that have developed around them." First, there's a contradiction here: if the suburbs are so great in the first place - such that families should always choose them over cities - then what exactly would make them "better off"? Second, Kotkin is entertaining another fantasy: he implies that we need to eliminate jurisdictions, hire region-wide planning directors, and give each of them enormous magic wands.

Many center cities are dysfunctional precisely because they have been competing with suburbs for decades - for population, development, jobs, and, of course, tax dollars. The suburbs have been winning by a landslide. As Kotkin points out, "between 2001 and 2011, detached houses accounted for 83 percent of the net additions to the occupied U.S. housing stock." Whether composed of palatial dream homes or acres of ticky-tack, the suburbs have prevailed for decades. So what, exactly, is Kotkin complaining about?

Really, Kotkin isn't complaining so much as he is pandering.

Kotkin could be part of the solution rather than part of the problem. Instead, he has written a dog whistle to the supporters and consumers of sprawl. In fairness, Kotkin admits that "we need both geographies." It's just an odd thing to say at the end of a book largely bashing one of those geographies.

And if those bars are too "crowded" with young singles for Kotkin's liking, I'll grab some friends and we'll drive out to Applebee's. The Diet Cokes are on me.