There comes a moment in the course of every nascent trend when we must ask, "is that a thing?" For tactical urbanism, that moment has been coming at least since 2008, when the (re)Bar collective deposited its first temporary minipark to inaugurate National Park(ing) Day. It's been coming since Mayor Bloomberg closed Times Square. And it's been coming since people in Los Angeles started referring to gourmet food trucks unironically. Or maybe it's been coming for a much longer time, since the days of stickball in the street, hopscotch on the sidewalk, and bartering at the crossroads.

In any event, we now can be pretty sure of the answer: yes. Tactical urbanism is indeed a thing. 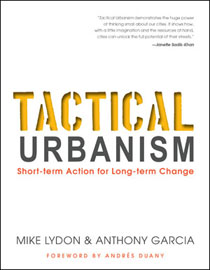 Tactical urbanism's entry into the mainstream comes in the form of the enthusiastic volume Tactical Urbanism: Short-term Action for Long-term Change by Mike Lydon and Anthony Garcia. If the term "tactical urbanism" doesn't exactly resonate, its examples might: parklets, farmers markets, guerrilla gardening, amateur wayfinding, Dumpster swimming pools, food trucks, little free libraries, temporary plazas, semi-disposable outdoor furniture, street vendors, and the rest. Until recently, almost no one would have said they were doing "tactical urbanism." They were just having fun.

The reification of tactical urbanism has arrived now for four reasons, according to Lydon and Garcia: shifting demographics, radical connectivity, the Great Recession, and citizen frustration. They translate to, respectively, millenials' return to center cities, the Internet and smart phones, and the high cost of development; the last one is self-explanatory.

Whatever the reasons, the authors want more of it.

Tactical Urbanism serves as a how-to guide for activists who want to get in on the action. There's not a lot of theorizing in Tactical Urbanism, which is probably for the best. Surely future scholars will have a field day with the trends that planners, and citizen-planners, are exploring today. Nowhere are ideas like Henri Lefebvre's "right to the city" more in question than when citizens take planning into their own hands. For now, though, everyone seems to be rolling up their sleeves and getting out the sidewalk chalk.

As Lydon and Garcia describe them, the innovations of tactical urbanism share a few characteristics. They are inexpensive, temporary or semi-temporary, small-scale, neighborhood-focused, and, sometimes extralegal. The playful side of tactical urbanism seeks to make urban spaces more inviting and lively. The serious side of tactical urbanism amounts to performative critique against not only modernism urban planning (which has already suffered a generation's worth of complaints) but also many of the progressive responses to modernism, namely smart growth and New Urbanism.

Practitioners of tactical urbanism wouldn't need to change the landscape if it wasn't so lousy in the first place. Typical city planning practices are simply too slow and the concern for stakeholder input perhaps too earnest. They write, "our cities are suffering because there is simply too much process and not enough doing." This is a radical manifesto born of frustration.

The book includes a historical account of what streets used to be ï¿½ places for movement, for sure, but also for interaction. They were not segregated places for cars but rather part of the essential fiber of a city, connecting places and people alike. We know what happened to that notion in the 20th century. Now that our cities are pretty much set, what with their buildings, streets, and freeways, there's only so much we can do to un-do some of modernism's mistakes.

Since tactical urbanism is more of a mindset than any particular intervention, with an infinite range of possible interventions for an infinite array of places, Tactical Urbanism relies on case studies to illustrate some of the possibilities:

For Lydon and Garcia, the biggest triumphs of tactical urbanism are often those moments when unsanctioned activity catches the eye of government and, rather than be quashed, becomes adopted, formalized, funded, and duplicated. In many cases, young planners are the best friends, or even alter-egos, of the folks doing the guerrilla work.

They provide practical framework for envisioning and executing tactical urbanism projects, proclaiming, "we want you [i.e. everyone] to feel empowered." It's an optimistic chapter, insisting that, "opportunities to apply Tactical Urbanism are everyone-from a blank wall to an overly wide street, to an underused parking lot of vacant property." The authors recommend a process of "design thinking", with five steps: empathize, define, ideate, prototype, test - and then start all over.

They provide tips for when a project should be sanctioned (large, publicly supported, tied to an existing planning effort) or below the government's radar (small, low-impact, no permit needed, outside the typical planning process). They go as far as to recommend way to organize people and use materials (pallets, paint, and cones are favorites). It is, basically, the class you never took in design school.

Tactical Urbanism does not speculate on the maturation of its subject. Now that tactical urbanism is a "thing," what's next? Right now, a few futures seem possible. It could prove to be a fad. It could get co-opted, if McDonald's, rather than the local coffee house, starts sponsoring parklets. Something could go horribly awry, like an automobile crash in a temporary plaza. Tactical urbanism is about experimentation, so an earnest failure may be as good as an accidental success.

The public nature of tactical urbanism means that it will one day have to answer to its critics. Even today, New York Mayor Bill DeBlasio is thinking about un-doing the wild success of his predecessor's Times Square plazas. The critiques come in three forms: 1) they're illegal, and planning, however slow or frustrating it may be, exists for a reason; 2) they do not address true urban problems, like segregation, inequity, and poor education; 3) they are playthings of urban elites, and too cute by half.

Disclosure: Lydon is an invited panelist on a session that I am moderating at the conference of the California Chapter of the American Planning Association.