Richard Florida's forthcoming book, The New Urban Crisis, will likely elicit one of two responses. It will be viewed as either a tardy, richly ironic attempt to undo damage for which Florida himself deserves partial blame -- or as a timely, if lamentable, analysis of unintended consequences and plausible solutions accompanied by an appropriate mea culpa.

Florida built his career on advocacy for the “creative class.” Back in 2003, he noticed that creative industries — which he defined broadly as anything from fine arts and fashion to programming and pharmaceuticals — did not need suburban office parks or noxious factories. Their “products” are based on ideas. Ideas thrive on collaboration. Collaboration requires congregation – i.e. cities.

But today, many cities, and perhaps Florida himself, have become victims of their own success.

In his introduction, Florida writes soberly, “I realized I had been overly optimistic….I entered into a period of rethinking and introspection, of personal and intellectual transformation, of which this book is the result." 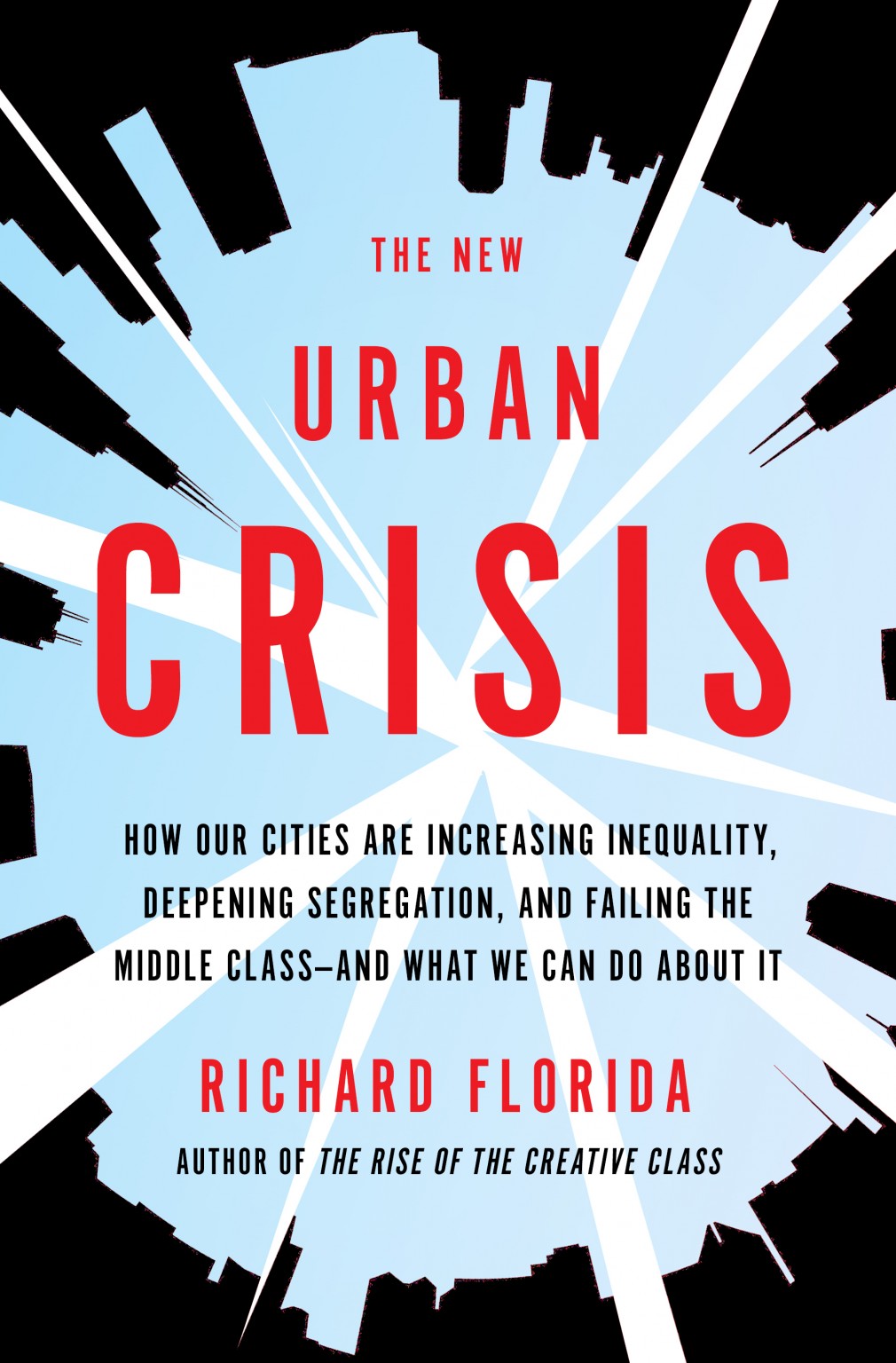 We all needed a good think, really. The last great urban crisis – back in the 1960s and 1970s -- took place in plain sight. The Cuyahoga River caught fire. So did the Bronx. Downtown neighborhoods emptied out and then got torn down. What Florida realized is that the current crisis, while not nearly as grave as the last one, is profound in its own way. But it’s relatively invisible, hidden behind, and not nearly as exciting as, the prosperity of the past decade. He realized that “the very same clustering force that drives economic and social progress also…. generates a lopsided, extremely unequal kind of urbanism. A relative handful of superstar cities…benefit while many other places stagnate.”

Florida’s index, like all indices, is semi-arbitrary — Vienna is a “superstar” but Shanghai isn’t? – but the point is well taken: talent, cultural influence, and capital gravitate converge in what Florida describes as “winner-take-all” situations. Cleveland and Liverpool suffer (relatively) while Chicago and London thrive. And why shouldn’t they? Mobility is a hallmark of the creative class. If you’re free to move anywhere, why move to the “second-best” city as opposed to the “best”?

The consequence of increasing wealth is increasing hardships for many residents — those who don’t make it big, and those who don’t want to make it big but instead just want to make a living. But cities are microcosms of global patterns: “Superstar cities fall victim to winner-take-all urbanism of their own, as they, too, are divided into a small number of extremely advanced superstar districts and much larger numbers of less advantaged neighborhoods.” Some cities experience trickle-down effects whereby the poor benefit from the spending of the wealthy, but even poor neighborhoods still suffer from inflated costs for housing.

(In almost every case, the major California metros rank atrociously, playing a game of musical chairs to see which can be the worst in a given category. Los Angeles has the worst working-class segregation and educational segregation. San Jose and San Francisco are Nos. 1 and 2 in overall occupational segregation. Conversely, four of the top six cities globally for venture capital investment are in California.)

He reserves choice words for political interests that have exacerbated the crisis.

Opponents of growth “not only preserve their own housing values but also put a brake on the very clustering that drives innovation and economic growth.” NIMBY activism has produced a “thicket of zoning laws and other land use regulations that restrict the supply of housing.” The aggregate result: an estimated loss of $1.4 trillion to $2 trillion in economic gains between 1964 and 2009.

Florida chides activists at the other end of the socioeconomic spectrum too. While low-income residents are understandably wary of displacement, Florida contends that the tendency to oppose new housing in low-income areas is counterproductive. “The media’s obsession with gentrification deflects attention from the far more serious problem of chronic and concentrated urban poverty,” he writes.

Unlike in generations past, the suburbs provide little relief. “Instead of pushing people toward the American Dream, suburbia today actually hinders upward economic mobility” especially for the poor, who have to shoulder the cost of transportation. Florida’s description of the suburbs partly echoes what many people said about cities themselves 60 years ago: “with their enormous physical footprints, shoddy construction, and hastily put up infrastructure, many of our suburbs are visibly crumbling.”

The hyper-dense, rapidly growing cities of the developing world are even worse off. Across Africa and Asia, rural migrants seek out cities not to realize their dreams but merely to survive. Many countries have only one major city, so migrants can go in only one direction — the ultimate example of winner-take-all urbanism. “Massive inflows of people can easily overwhelm a city’s ability to effectively absorb them,” Florida writes, "so tremendous numbers of new migrants end up being packed into rudimentary settlements in mega-slums.”

For all the gloom, make no mistake: Florida still believes in the power of the creative class — and he’s still himself. (You know it’s a Richard Florida book when it includes references to “Byrne, Smith, and Moby” — i.e. David, Patti, and, well, Moby.) He just wants cities to take a more nuanced approach.

The New Urban Crisis lacks much of the dazzle that characterizes Florida’s earlier work — he’s like a Taylor Swift fan who just discovered Morrissey. Previously, Florida presaged, and encouraged, ebullient trends that hadn’t happened yet. This time, he’s describing depressing things of which many urbanites are all too aware. Whether Florida should have been aware of them — ahead of time — is the question that hangs over the book.

Indeed, Mike Davis, among others, has been warning about this stuff for years, with full Marxist indignation. In 2008, he and co-editor Daniel Monk gave “superstar cities” a far more sinister name: “Evil Paradises." Florida is less shrill than Davis and more optimistic. Whereas Davis sees class struggle and capitalistic exploitation in every penthouse and gated driveway, Florida sees more of a garden-variety mess.

The scholar seemingly most at odds with Florida is Joel Kotkin. In last year’s The Human City, Kotkin presented a passel of self-contradictory recommendations to a) lower their costs of living and be more friendly to young families; by b) turning away from dense urbanism and re-adopting the suburban model that families “like.” How less density in San Francisco or New York would lead to lower costs of living, Kotkin does not explain.

Florida’s approach is far more realistic and intellectually consistent than Kotkin’s: "the way out of the New Urban Crisis is more, not less, urbanism.” (You can read Bill Fulton’ old but still fun three-part riff on Florida v. Kotkin here and my review of the The Human City here.)

Florida has concluded that urban success depends on balance. Balance among cities. Balance within cities. Even balance on the level of a city block. “Urban economics are powered not by extreme residential density and huge towers, but by the mid-rise, mixed-density that promotes mixing and interaction,” writes Florida.

Florida prescribes a mix of pragmatic physical and policy solutions. He calls for the reform of zoning codes to support infill development; provision of infrastructure, including transit, to enable dense cities to do what they do best; and develop “affordable” rental housing. On the policy front, he wants cities to get serious about alleviating concentrated poverty and supporting low-wage workers. He even proposes a guaranteed minimum wage for workers and, at the other end of the spectrum, a land-value tax to encourage property owners to develop property intensively rather than let them languish as, say, mini-malls and parking lots.

Florida wants national officials to get with the program too. He proposes a “Department of Cities and Urban Development” to set urban policy and, importantly, maximize federal funds that go to cities. He notes, “the federal government is already spending a lot of money on cities and urban development through a wide ran of initiatives, ranging from transportation and housing to education, crime, and economic development—none of them coordinated in any meaningful way.”

“We must put cities and urbanism at the very center of our agenda for economic prosperity,” he writes.

Had I read The New Urban Crisis on November 7, I’d have placed it somewhere between obvious and inspiring. The latter is certainly how Florida felt about it. Today, who knows.

Florida wrote the preview draft before the November election, with the assumption that Hillary Clinton would win the presidential election. And he assumed – as did many of us – that a Clinton presidency would respect and support cities, especially since city-dwellers voted for her overwhelmingly. Trump’s win, which came largely from rural areas that are culturally and temperamentally suspicious of cities, compelled him to write a late revision, changing the introduction and conclusion.

Trump’s election rattled Florida, and not just because he had to write a few more paragraphs. He seems genuinely to fear that Trump will neglect and abuse cities like no other president in recent memory. He puts on a brave face, though, writing in his update, “Now more than ever, mayors and local officials will have to take the lead on transit, affordable housing, poverty, and other pressing urban issues.” (Kotkin actually agrees with this, promoting something he calls “localism”.) But Florida knows that Trump’s presidency transcends specific issues. With chilling certainty, Florida writes, “The geographical and cultural divides that the New Urban Crisis has etched into our landscape are deep….our newly elected government will only make them worse.”

Perhaps what Florida really did by promoting and branding the creative class was to unwittingly give the forces of stasis and conservatism a target at which to shoot. It’s one thing for a city to go about its business, gradually adding residents and jobs by the grace of the free market. It’s another thing to be invaded by “the creative class.” The invasion is all the more threatening when it consists of young, weird people who work at new, unfathomable jobs.

(Encouragingly, Florida and Kotkin are drafting a joint op-ed about how cities can address the Trump administration. Strange times lead to strange bedfellows.)

Until President Trump’s urban policies come to bear, The New Urban Crisis provides a tidy, timely summary of the current urban problem, in all its enormity. Florida’s statistics and graphs may not stir the soul the way stories about evictions, gang wars, galleries, and gastropubs do. But they testify to the seriousness of the trend and its long reach.

Notwithstanding President Trump, I find myself sympathizing with Florida. Sure, he’s a target because he’s a celebrity academic and he may have marketed his theory of the creative class too exuberantly. But he’s not Mayor of the World.

Whatever fantasies Florida foisted upon cities, he never told them to do it badly.

If anything, the biggest mistake of Florida and other city boosters was to sell cities to creatives (and vice-versa) without fully impressing on creatives their obligation to be citizens. Creative class residents can build awesome iPhone apps, drop dope tracks, and throw great parties. But creativity doesn’t inherently lend itself to civic participation. But civic participation -- from everyone, not just the NIMBY's -- is exactly what's required to create equity, civic prosperity, and urbanism that serves everyone.

Too many members of the creative class have stood by, immersed in their own worlds, while their cities have become more expensive, more segregated, and less accessible. What Florida probably should have advised is that every newcomer not treat their new cities like playgrounds but rather like projects — projects that require every bit as much attention as do the tech startups, underground theater companies, and urban planning newsletters that keep the creative class busy.

Now we may need to get busier than ever.

The New Urban Crisis: How Our Cities Are Increasing Inequality, Deepening Segregation, and Failing the Middle Class -- and What We Can Do About It

SAVE THE DATE: June 17 Webinar:

The -Plex Paradox: Writing the Code to Undo Single-Family Zoning