Mathematicians often take delight in Cat's Cradle, the age-old game of making string figures on one's fingers. In the most familiar form of this game, one person starts out with a simple rectangle of yarn or string, and then makes a simple figure by looping different parts of the yarn around his or her fingers. This figure is then passed to the fingers of a second player, who introduces another layer of complexity into the figure before passing the increasingly complex string figure to a third player. And so on, until the figure becomes so complex that it becomes impossible to go further, at least with a two-foot length of yarn.

Cat's Cradle is being used here as an analogy, admittedly an artsy one, to describe two different kinds of suburban planning. These two planning types  let's call them the ideal new urbanist village and the "builder vernacular" mixed-use neighborhood  do not look like one another, at least at first glance.

The new urbanist village, in the hands of artists like Peter Calthorpe or Stefanos Polyzoides, is often a handsome design. Owing something to the traditions of the French Ecole des Beaux Arts, these designs set up a hierarchy of bigger spaces and major avenues that are broken down into smaller spaces and smaller streets. The intent is to create a sense of pervasive order that, in the minds of the most idealistic practitioners, gets translated into social order.

In the builder vernacular version of the urban village, such as the 493-acre Fancher Creek project in southeast Fresno, the site plan would not end up under glass on your wall, unless you were a land developer or a home builder. Elegant it is not. This is the image of land as commodity, even if the land parcels are not subdivided into neat, regular blocks the way the old-time commodifiers did during the 1800s. 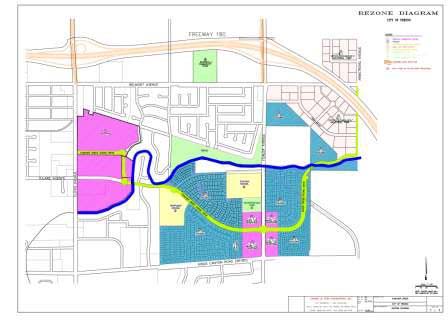 The red ink-blot on the left-hand side of the plan will be a shopping center, while the pink triangle on the right will be a commercial-industrial park. The squidgy blue parts in the middle are housing; Centex Homes is already developing two subdivisions in Fancher Creek. The yellow rectangles represent schools, one existing and one planned. The pink rectangle at the bottom center of the plan, which is the most promising part of the plan, is a mixed-use shopping district. Although this area has not yet been planned, it might be reasonable to expect some loft housing, perhaps some live-work units, some retail-and-office hybrids and the like. Hopefully, social servicesthe dentists, doctors, child-care agencies and marriage counselorsmay find places to work in this quadrangle.

One disappointment of the plan is the relatively small amount of open space  a tiny park that serves as a buffer between an existing school and the mixed-use quadrant, and a second park that serves as a similar buffer between Fancher Creek (the actual waterway) and the existing neighborhood of labyrinthine suburban streets. (One good way to haze a new UPS driver would be to send him on deliveries in this neighborhood.)

Another letdown of the plan is the minimal acknowledgement of the natural waterway, which many planners and landscape architects would seize upon as an organizing device, as well as a way to create a linear park that connects to larger parks along the way. Here, the creek serves little purpose beyond providing a natural barrier between new retail development and the existing neighborhood, or providing further separation between the new master-planned development and older housing.

Those objections aside, this is a very workable plan that preserves most of the virtues that the new urbanists like to crow about: Residents can walk to shopping and services. Children in a majority of households can walk to a park without crossing a major arterial. (The exception is the baseball/community park, sequestered north of busy Belmont Avenue.) And the "four-corners" intersection of Fancher Creek Scenic Drive and Fowler Avenue would be a great place for a transit station, if one is not already planned.

The new urbanist crowd may not be wowed by the curving configuration of residential streets with their many cul-de-sacs. Yet a close look at the neighborhood suggests that traffic planning has been done thoughtfully to allow neighborhood functions such as driving to school or the market to occur primarily on neighborhood roads, while regional traffic is held at bay on the periphery of the project. As future regional destinations, the shopping center and the "office-technology-industrial park" belong on the outer edges, where their potential traffic and air-quality impacts will have minimal effect on Fancher Creek residents.

The closer one looks at the Fancher Creek site plan, in fact, the more it resembles an old-fashioned, hierarchal layout: The neighborhood-serving retail and services are in the middle, while the first concentric circle is made up of housing and schools. In the outermost circle are the big, "regional destination" shopping center and the tech park. The priorities, for the most part, are in the right order.

For all its clumsiness, Fancher Creek could shape up to be a viable, mixed-use neighborhood. The obvious problem is that there is no necessary relationship between the employment centers and the residential neighborhoods. The unfortunate likelihood is that Fancher Creek homeowners will get in their cars and drive through hot, dusty streets of Fresno to far-away jobs, while other suburbanites will schlep from distant places to jobs in the pink triangle adjacent to Highway 180. That's not the fault of Fancher Creek's developers, a local venture of Fresno developers Tom Richards and Ed Kashian. The fault lies with lawmakers who preach the doctrine of jobs-housing balance but fail to encourage a stronger spatial connection between residence and employment.

Klutzy or not, Fancher Creek is a big improvement on the previous suburban model, and may even turn out to be a good place to live.