A charming anecdote from the childhood of the future Queen Victoria can be found in Lytton Strachey's classic biography. When still a young noblewoman of five or six, she is introduced to the aging King George IV. "Give me your paw," says the fat, dissolute monarch to the future Empress of India, who duly complies. At that moment, the biographer writes memorably, "Two ages touched hands."

Two ages also touch hands, in a metaphorical way, in the specific plan for Loma Vista in Clovis. Instead of a king and future queen, however, we have two ages of California land development encountering each other in one of the last remaining corners to be developed in this Fresno County city of 95,000 people. The first age is the 19th Century, when much of Clovis and neighboring Fresno were divided into large, square lots by land barons for sale to small farmers. Those farmers grew wheat and planted vineyards in land newly irrigated by canals (known locally as "church canals") that connected the Kings River to the Fresno area. To a remarkable degree, the regular, checkerboard street grid of Clovis preserves the boundaries of those old farming tracts, most of which date from the 1880s.

The other age in this historic encounter is the early 21st Century, influenced strongly (if not always systematically) by the orderly doctrines of the new urbanism. A quick glance at the Loma Vista specific plan offers some of the symmetrical, geometrically regular shapes that have made new urbanist planning so attractive, at least at the map level. 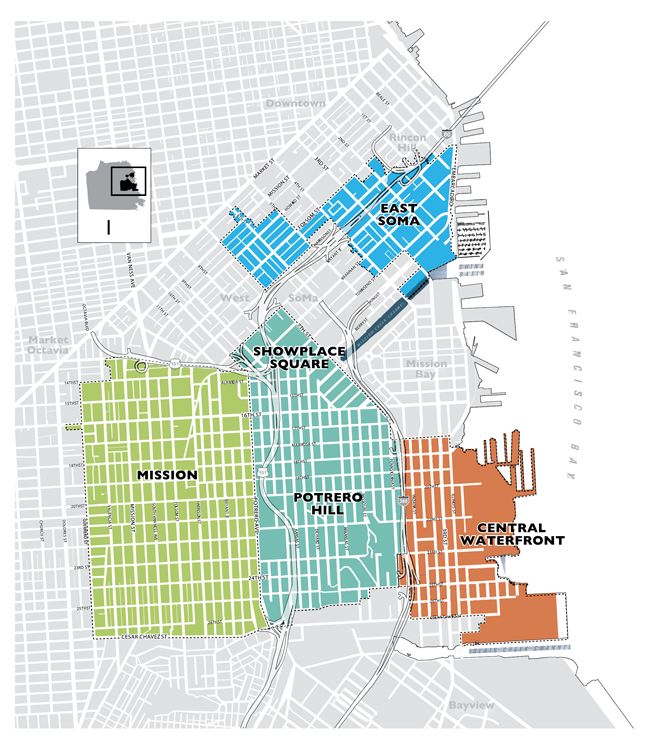 This part of the city carries a lot of planning weight on its shoulders, so to speak. The city is 6,000 housing units short of the regional "fair-share" mandate, including several thousand unbuilt units of affordable housing. Although that housing goal is probably unattainable either within the city or its sphere of influence, Loma Vista is planned for dense residential development, surrounded by a moat of conventionally dense single-family neighborhoods. The city has already set aside about 145 acres for the Reagan Educational Center, a campus combining elementary, middle, and high schools. The plan also sets aside a large area for "residential planned community."

The surveyor part of the plan is not exciting. The map of Loma Vista lacks spatial hierarchy or an obvious center, even though the city in fact has well-defined downtown and historic districts. What the street pattern lacks in visual interest, it probably makes up in efficiency, because the regular street pattern likely works well for cars and trucks. It is odd, however, within this "flat" hierarchy of 80-acre farm parcels to see the crystalline new urbanist outlines of the Loma Vista specific plan, redolent of a very different chapter of later 19th Century-early 20th Century history: the garden cities of England, in which entire communities converged on well-defined town centers. Accordingly, the Loma Vista plan centers on the Reagan campus, with a colony of "very high density" homebuilding and high-density homebuilding (brown and tan) surrounded by commercial and office space (violet). 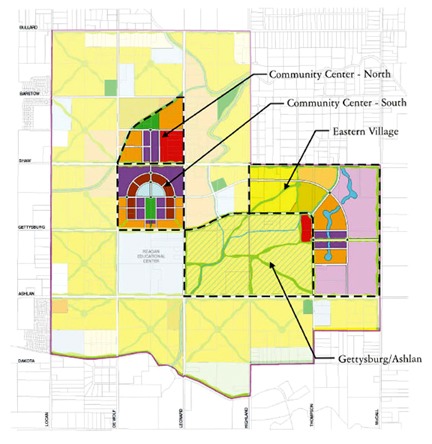 Perhaps the master plan designer is a little too fond of the garden city/new urbanist prototypes. At the least, I wonder whether the semi-circle of very-high-density buildings at the center of the plan will look as elegant in elevation as they do in the plan: These footprints promise to become mid-rise or even high-rise buildings, and the semi-circle could end up looking like enormous dolmens in some latter-day Stonehenge. On the other hand, the master planner has oriented these tall buildings around a park or green space  a traditional but very welcome device amid this crush of dense, traffic-spewing development. Maybe the plan of Loma Vista is too urban for Clovis; I can imagine people flying over town at a height of 30,000 feet and mistaking the high school and the housing scheme for a grand civic center.

The real trouble with this new urbanist scheme is that it does not go far enough. Once we travel beyond the boundaries of the well-knit center of schools-apartment buildings-commercial space, the formality gives way to conventional suburban site planning. Crystalline order dissolves into oddly shaped blotches and swatches, such as the mid-density residential neighborhood to the immediate east (orange).

The contrast between formal and informal planning here looks as incongruous as a picture of the Mona Lisa stuck in the center of a Jackson Pollack canvas. How will developers arrange their two- and three-story apartment buildings on this irregular site? Does this type of planning lead toward orderly streets and boulevards, or the look of scattered bric-a-brac? And, as mentioned before, the master-planned community directly to the southeast may or may not comport to the new urbanist scheme next door. The promise of orderly planning seems to be breaking up all around us.

Our disappointment, however, turns out to be relatively minor, when we consider the paseos. By far, these pedestrian pathways are best things about Loma Vista. The planners have designed these tree-covered paths to lie at a 45-degree angle to the rest of the old grid so the paseos have minimal contact with vehicular traffic. Even better, the paseos connect with Clovis' existing network of trails that cut across the farmland immediately east of the city, taking an enviable open-space network and making it even better. The result is a linear park that provides a meaningful offset to the crowding and traffic of high-density development.

The formal gizmo at the center of the specific plan may be pretty, but the paseos are the big payoff of Loma Vista. They may not be as dramatic as the meeting of a king and a queen, but this encounter between an old grid and new planning ideas is very good news for Clovis.