The city of Dublin in Alameda County bears little resemblance to the English countryside of the late 1800s. The scene is not sylvan, to put it mildly. Instead of a landscape of mills, farms and contented cows, we see one of the Bay Area's fastest growing cities, proliferating with enormous apartment blocks and office buildings. Although there are easily accessible, undeveloped hills rising just beyond the west and east sides of Dublin, it's doubtable that Constable, the painter of lowing herds and hayricks, would have memorialized the town on canvas.

What Dublin and the English countryside of 100 years ago have in common, however, are carefully planned villages that attempt to combine city living, including factory work and shopping, with the healthfulness of open space and farms. In England, the most famous examples are Letchworth Garden City (built in 1903) and Welwyn Garden City (1920), both developed by the social reformer Ebenezer Howard (1850-1928). Surprisingly, the present-day planned-unit development known as Fallon Village in Dublin has much in common with Howard's idealistic settlements. The differences between them are equally interesting.

It's not hard to see the appeal of compact development in a city that has more in common, at least superficially, with the suburban sprawl of Southern California than the Bay Area. One of Howard's concerns was to prevent people from abandoning the countryside, in search of jobs, for slum housing in the cities. Present-day Dublin officials may or may not share Howard's idealism, but they seem to retain his belief in the goodness of the countryside and perhaps his desire for both order and human scale, as well.

Approved by the Dublin City Council last November, the 1,134-acre Fallon Village is an assemblage of 13 different land holdings on the east side of the city, at the border of unincorporated Alameda County. Braddock & Logan, a Bay Area homebuilder, has received approval from the city to fill 488 acres of the village with 3,100 single-family houses. The remaining portions of the site are set aside for small farms or "rural residential" estates, apartment complexes, office buildings and retail in the foreseeable future. In this way, Fallon Village is almost a self-contained city, like the Garden Cities before it  even if no community in the Bay Area, especially one located along both BART and the 580 Freeway, can realistically expect to be self-contained.

Although the gerrymandered shapes on the land-use plan of Fallon Village are a little hard to comprehend at first glance, a certain logic lies behind its informality: A habitat trail, moving diagonally from north to south, literally splits the plan in half. Fallon's master planners have wisely taken advantage of this dividing line to "break down" the scale of the site. On either side of the habitat trail, the master planners have created three enclaves of single family homes, each with its own neighborhood park. 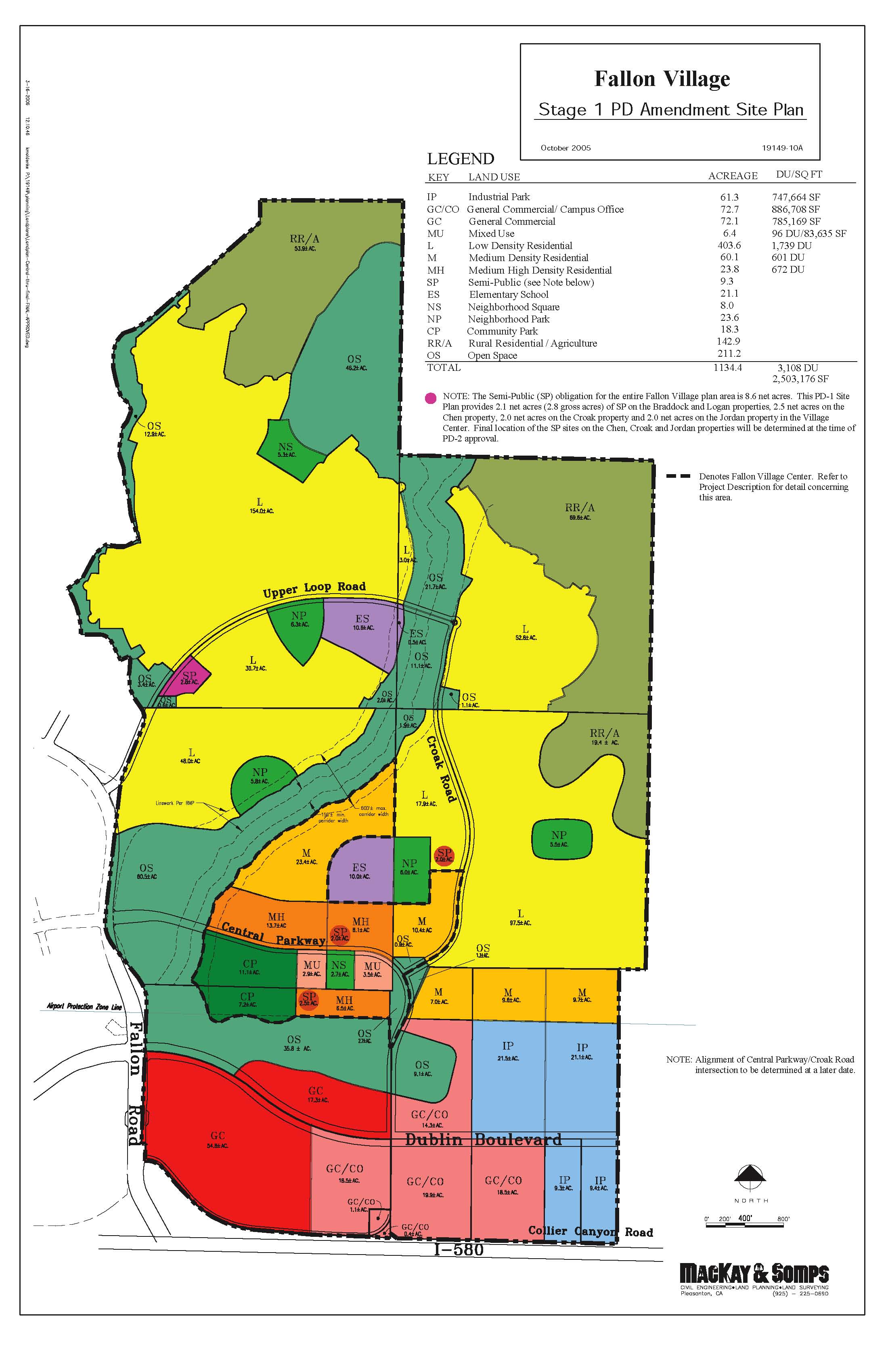 This idea of housing bordered by farms is perhaps the strongest point of resemblance between Fallon Village and the early garden cities. Howard's own diagram for his cities, reproduced from his 1902 book, Garden Cities of Tomorrow, may be helpful here. The center of the city is open space, explicitly public. (Why are utopian cities so often conceived of as circles?) The first ring around the park consists of public uses, especially shopping and local government buildings. The layer after that is housing, interspersed with factories and work places. The outermost edge is farmland, which Howard believed had both physical and moral benefits for garden city dwellers.

As in Letchworth and Welwyn, we can see the density growing thinner in Fallon Village as one moves from south to north. The most intense uses  multi-family housing, retail, office space  are concentrated at the bottom of the plan. The middle-range (the big yellow splotches) is single-family homes, while farms and rural estates are the low-density edge on the north.

One of the most appealing details in the plan is the elementary school, bordered by a triangular park to the west and farmland to the east. Here, some of the most obvious differences between Howard's dream villages and Fallon Village become apparent. Fallon Village is a commuter subdivision for middle-class homeowners, not a model colony for working people. I see a tension between the ideals of communal life that are laid out with almost pedantic obviousness in Howard's plans, as opposed to the curving streets of present-day America, where privacy and living-unto-oneself are primary values.

Still, the planners have not entirely neglected the public life: The land-use plan indicates space for an eight-acre "public plaza" at the center of the plan, hemmed in by commercial buildings on three sides; Leon Krier, the German city planner, would approve, even though eight acres seems way too large for anything except outdoor concerts and political rallies. For some reason, this generous plaza fails to suggest a social center to me, perhaps because the only other major public space that connects to it directly is a major corridor that runs east and west, rather than streets branching out of the public space, which would increase its accessibility and its visibility.

Beyond ideology, then, what is the major difference between Fallon Village and Welwyn? The former lacks cogent urban form. Fallon Village, at least in the nascent form of the land-use plan, lacks the idea of public life as a unifying principle. In Howard's quaint old diagram, we see how clearly the street pattern directs everything toward the public uses  transit, shopping and housing  at its center. Fallon Village, in contrast, is in the end a conventional suburb, with some charming amenities. A century after they were built, Howard's towns remain popular places to live, even though they have been absorbed as suburbs into larger cities; good urban design tends to survive, because it is both workable and pleasant.

I would like to see how much of Fallon Village survives in a century's time, after the population flood washes away the rural charm.