You are here: Home » Articles » With Old Town In Fine Shape, Monrovia Looks To Transit Future

Located in the San Gabriel Valley about five miles east of Pasadena, Monrovia began redeveloping its historic core during the 1970s. After decades of planning and both public and private investment, Old Town Monrovia has become a successful area of interest to private developers.

"It may not be the financial center of town, but it certainly is the emotional center of our town," Mayor Rob Hammond said of Old Town.

Now the focus is shifting to the Station Square area  80 acres adjacent to the 210 Freeway and straddling a planned extension of the Gold Line light rail system. The city's redevelopment agency is working with local developer Samuelson & Fetter on a transit-oriented development with between 1,400 and 3,000 housing units, 850,000 square feet of office space for high-tech and research-and-development companies, 140,000 square feet of retail space, and a hotel. The project would mark a major change from the hodgepodge of small industrial and service uses currently in the area. The redevelopment agency has acquired 20 acres for the project.

Monrovia's redevelopment has not been without setbacks or discontent, but Monrovia's overall success stands in contrast to the experience in the neighboring cities of Sierra Madre and Arcadia, where redevelopment opponents have halted major projects in recent years (see CP&DR Redevelopment Watch, September 2007; Local Watch, May 2007).

"Monrovia said 35 years ago this (redevelopment) is the thing that is going to be the difference in this town," said city spokesman Dick Singer. "It has driven economic development for a generation."

"Our community," added Hammond, "has grown up with the concept that redevelopment is not the bogeyman, because we've had a very strong and a very ethical redevelopment agency." The agency has ensured that it treats property owners fairly, which everyone recognizes, he said. "It keeps people who are scared of government close to the path."

Redevelopment in Monrovia generated $6.8 million in tax increment during the 2005-06 fiscal year, the last for which figures are available from the state controller's office. In 2002, the city added a new redevelopment project area south of the freeway, which includes the Station Square territory. 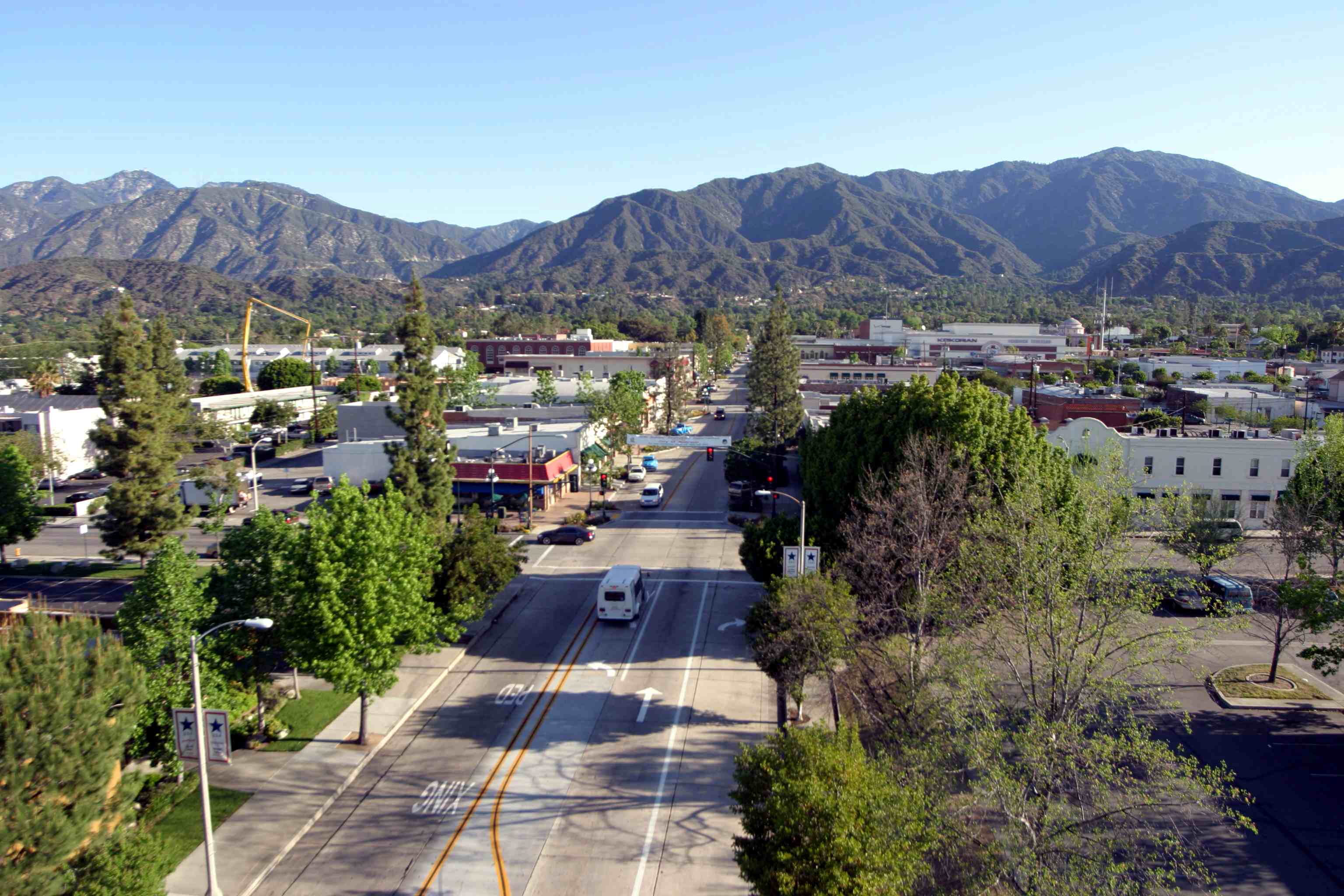 Early morning at the south end of Old Town.

Old Town is essentially a six-block stretch of Myrtle Avenue, about one mile north of the freeway. The area has been the center of town since the 19th century but has had its ups and downs. Today, the virtually spotless district contains a variety of shops and services  an appliance store, dry cleaners, numerous salons, coffee houses, bookstores, music stores, a few nightclubs. City hall is only one block off Myrtle, as are some classic century-old craftsman houses.

Another turning point occurred in February, when developer Barker Pacific Group conducted the grand opening of models in Colorado Commons, the first residential units built in Old Town since the 1970s. The project contains 68 housing units ranging from simple 700-square-foot flats to luxury 2,100-square-foot townhouses, plus four retail spaces totaling about 4,000 square feet. Fourteen of the housing units are designated as "affordable," according to Singer.

The agency began acquiring the property for Colorado Commons, a half-block west of Myrtle, during the early 1990s. The site contained a convenience store, an auto repair shop and some dilapidated housing, Singer said. The city demolished the structures and created surface parking. Eventually, the agency made a deal with Barker Pacific. The city provided the 2.1 acres in exchange for the developer building a public parking structure with about 200 spaces, according to Kevin O'Brien, the city's redevelopment division manager.

"It was just a great location," said Barker Pacific Project Manager Reed Garwood, citing the proximity to restaurants, shops and the movie theater.

The next residential project, scheduled to break ground this spring, is on the southern edge of Old Town. Urban Housing Group intends to reuse a three-acre former office industrial property for development of 163 apartments and about 4,000 square feet of office or retail space. The project, known as The Courtyards at Old Town, is purely market-driven and has no redevelopment agency involvement. But Don Deibel, vice president of development for Urban Housing Group, readily admits that the city's "ambitious redevelopment" attracted the company to the site, which it purchased from Barratt-American.

"The overall sense of place they are creating is impressive," Deibel said. "They are very focused on improving downtown Monrovia."

One of the final pieces of the Old Town puzzle also is not a redevelopment agency project, but it certainly involvements redevelopment. In January, the city tore down its library and began work on a replacement, 28,000-square-foot facility funded by a $16 million voter-approved bond. The construction has closed the square-block Library Park, which is Monrovia's primary community gathering place, until 2009.

The Station Square project is not proceeding on such a tight timeline, partly because of the housing market downturn and partly because of uncertainty over the Gold Line extension. City officials feel like they have no control over either; nevertheless, they continue to plan and prepare for the huge redevelopment project with the longer term in mind.

"The train is eventually going to get here. I hope it is within my lifetime," said the 47-year-old Hammond. "The City of Monrovia can't wait around for the MTA (Metropolitan Transportation Authority) to do something."

For years, the MTA has planned to extend the Gold Line 24 miles beyond its current terminus in Pasadena to Montclair. Cities along the line, including Monrovia, Azusa, Glendora and Claremont, have planned and even approved transit-oriented development projects along the proposed light-rail alignment. Last year, however, the MTA shifted its attention to Lost Angeles's Westside and a potential "subway to the sea." In January, the MTA declined to keep the $1.4 billion Gold Line extension on an important funding list.

Assuming the Station Square project goes forward at some point, an additional issue concerns linking the area with Old Town. The two areas are about 10 blocks apart along Myrtle Avenue. Several years ago, an Urban Land Institute (ULI) advisory group recommended the city transform Myrtle into a more pedestrian-friendly boulevard between the two districts. The concept excites city officials, who see such a project as an important transformation of the Myrtle Avenue corridor that could goose Old Town commerce and ensure that Station Square integrates into the rest of town.

The Station Square project "must fit into our community without feeling like it is a whole new community," Hammond said. "We cannot create a whole brand new area and say, OK, that's Monrovia, too.'"

The details remain undecided and potentially tricky. Hammond would like to see a trolley run for about a 1 1/2 miles from Station Square to the top of Old Town. Singer advocates an old-fashioned streetcar zipping up and down Myrtle. The ULI envisioned something other than the current auto-dominated commercial and industrial atmosphere. However, the redevelopment agency controls little land along the corridor, and, at a glance, existing businesses appear healthy. The city has not wielded a heavy hand with redevelopment (it has employed eminent domain only about six times in 35 years, including some instances requested by the property owner for tax purposes) and has no plans to become aggressive now. Thus, the Myrtle Avenue evolution may be slow.

The city has been willing to use redevelopment powers more aggressively to combat gang violence that has flared elsewhere in town. Four people were killed and five others were wounded by gunfire during a 10-week period starting last November. Some of the victims were mere bystanders caught in the crossfire. The redevelopment agency has been buying houses that serve as gang hangouts, funding code enforcement, fence replacement and graffiti removal, and even sponsoring block parties to re-establish neighborhood ties, Singer said. All efforts are aimed at maintaining decent working-class neighborhoods, he said.