Ten years ago, Suisun City was one of the nation's great redevelopment success stories. Plagued by violent, drug-dealing gangs, it literally bulldozed their strongholds to make room for a fancy civic center. The city reclaimed its neglected waterfront and approved the construction of hundreds of homes in a traditional neighborhood development.

Suisun City, located adjacent to the Solano County seat of Fairfield, became a case study for planners, new urbanists and journalists, earning state and national awards for its turnaround. Despite the troubled economy, redevelopment continues, with a new motel under construction and a 40,000-square-foot mixed-use building nearly complete. As recently as last winter, Peter Katz, founding director of the Congress for the New Urbanism, named Suisun City the third "most enlightened" suburb in the country.

But all the success and awards have not lessened a feeling that Suisun City's redevelopment still has a long ways to go.

Vacant lots and empty or underused buildings occupy a considerable stretch of Main Street in old town, including several blocks across from the waterfront. A hoped-for transit-oriented development near an Amtrak commuter train station has never materialized.

Solano County Supervisor Jim Spering, who was Suisun City mayor for 20 years, says it is time for the city to re-evaluate the downtown specific plan and to pursue development more aggressively. Camran Nojoomi, who served as redevelopment agency executive director and for two years as city manager during the 1990s, agreed.

"We used to control and run the development business of the city," recalled Nojoomi, a businessman who is developing a small mixed-use project in town. "Now they [current city officials] are more passive. We didn't just wait for things to happen."

Suisun City Mayor Pete Sanchez, who replaced Spering in 2007 after eight years on the City Council, concedes that downtown redevelopment is not complete. He is quick to say that the area needs more residents and more attractions for locals and visitors. But Sanchez said that Suisun City residents are not demanding more aggressive redevelopment. He doubts there is significant interest among the general public for updating the downtown plan.

"We are dealing with a bedroom community of 27,000 people. Everybody is just so busy commuting to work and coming home to their family," Sanchez said.

It was 1988 when Suisun City hit bottom. That year the San Francisco Chronicle conducted a quality-of-life survey that compiled statistics on crime, median income, public facilities and such for all 98 municipalities in the nine-county Bay Area. Suisun City ranked dead last.

In his first of five terms as mayor, Spering responded by spearheading development of a downtown specific plan to replace one that had gathered dust since 1982. With the help of San Francisco's Roma Design Group, the city soon had a new plan, and with Nojoomi running a merged redevelopment, planning and housing agency, the city was soon acting as the lead developer.

One of the city's first actions was cleaning out the Crescent neighborhood, a 470-unit condominium complex near the waterfront that was a gang haven. The city condemned the properties, relocated about 2,000 residents and approved the 300-unit Victorian Harbor project  a traditional neighborhood development of single-family homes with front porches, narrow streets and extensive trees  on the site. With the gangs gone, some of the former Crescent residents returned to entry-level housing in Victorian Harbor, which remains desirable today.

The city also built a nautical-themed civic center on the waterfront just down from the former Crescent neighborhood as a statement that the public was reclaiming the territory. Suisun City funded the iconic project with redevelopment revenue, which would be illegal today. 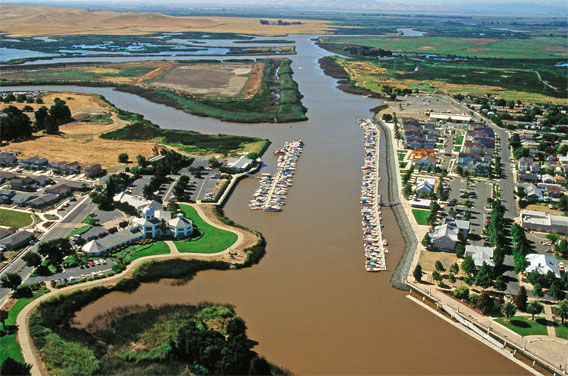 A south-facing view, with the civic center at left and old town to the right of the long marina.

A very narrow arm of Suisun Bay reaches into the downtown, as it has since the city's founding in 1848. For many years, the waterfront was a polluted, industrial area inaccessible to the public. The specific plan envisioned a public promenade around the waterfront, parks and al fresco dining  which is pretty much what the city got, along with a new 150-slip marina. It is a busy place on weekends and during the many community events on the calendar.

Jason Garben, the town's economic development director, said Suisun City has been successful because city leaders have stuck with the 200-acre specific plan for the waterfront and old town area for 20 years. The plan is flexible in achieving its overall vision, as key properties are zoned to permit a mix of commercial, office, industrial and residential uses. The area contains a number of two-story structures with retail outlets or restaurants below residences, as well as live-work units for professionals. There is also a collection of new craftsman-style bungalows that face onto a greenway across the street from city hall.

During the housing boom earlier this decade, developers pressured the city to rezone properties for strictly residential development, according to Garben. It resisted, and in some ways the boom bypassed Suisun City. Most of the town's suburban housing tracts were built during the 1970s and 1980s. The city did approve a Wal-Mart Supercenter in the eastern part of town, which spurred a recall effort and lawsuit, neither of which were successful.

The residential housing tracts are disconnected from the downtown waterfront area, which the city hopes to fix. Toward that end, the city recently completed a bikeway that runs through town, over Highway 12 and into downtown. Garben points to a vacant 30 acres tucked between downtown and residential areas  and within walking distance of the station where the Capital Corridor train stops 32 times a day. He foresees the property providing a crucial link to and entry into downtown.

"That could be a real opportunity. You could do some high-density, transit-oriented development," Garben said. However, such a project was difficult to put together even when times were good.

Nojoomi said the site offers a "tremendous opportunity" for high-rise residential development, and he urged the city to plan now to ensure piecemeal development does not swallow the golden egg.

"I really think the area could use a lot more residential with commercial. We need to get more people in old town and capitalize on the lifestyle," Nojoomi said. "We could increase the use of the train on a daily basis with a resident population." 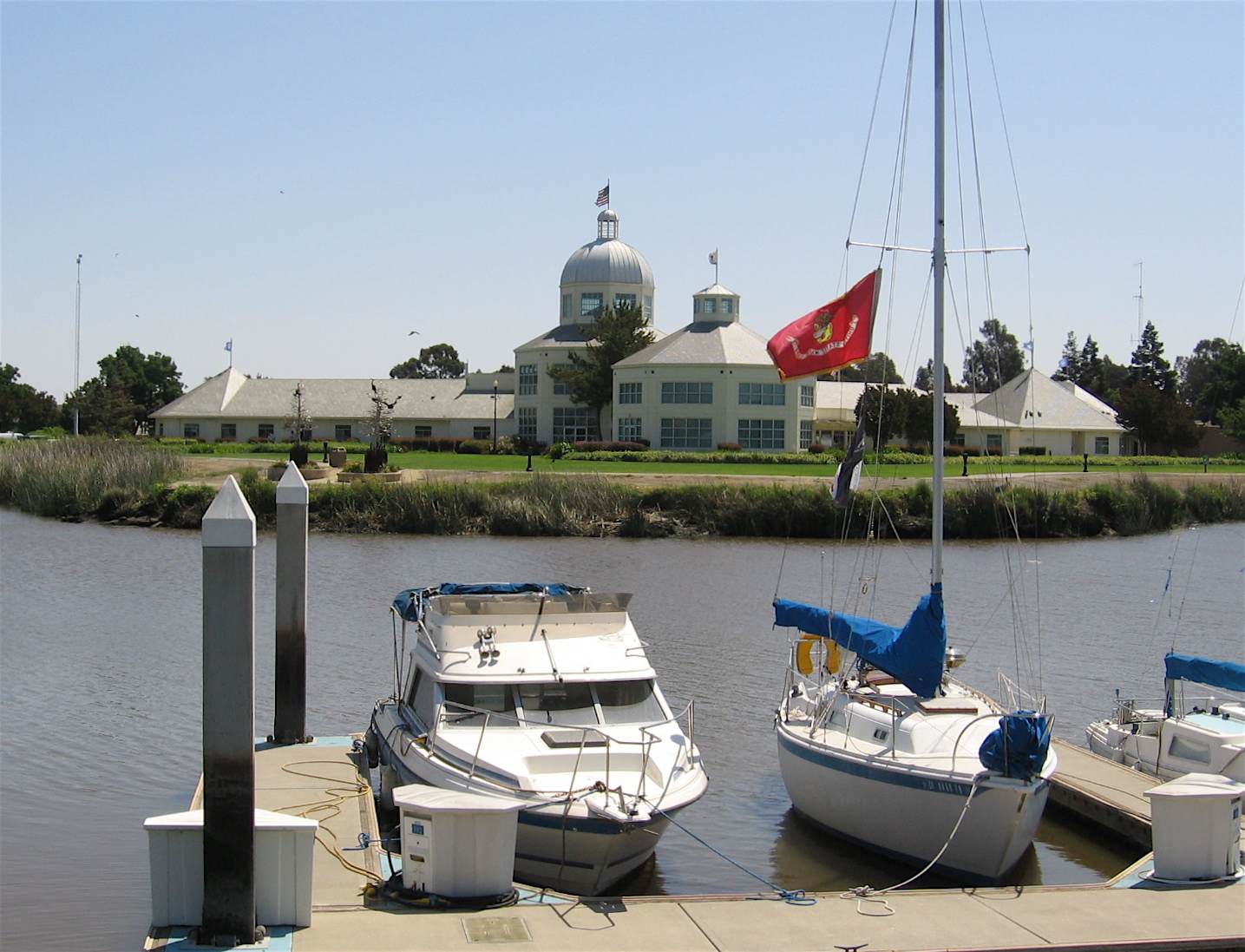 Suisun's civic center as seen from the marina.

Spering suggests replacing some of the warehouses and industrial buildings near the train station with a town square or plaza. The city needs to do something to take better advantage of the station and to generate more traffic for downtown businesses, he said. Like others, he is frustrated by the blocks of vacant and underused properties lining Main Street within a couple blocks of the train station.

"If there is one failure in that whole project, it's that we didn't engage the private sector. That whole west side of Main Street is just as blighted as it used to be," Spering said. "The private sector's absence is just glaring."

Mayor Sanchez agrees. The Main Street property owners "have not responded for 20 years. They are property owners who have long been out of touch with the city," he said. However, he noted, the redevelopment agency does have eminent domain authority, and "as soon as the economy picks up, I wouldn't hesitate to use that authority.  It's just a matter of rounding up the right parcels and working on a good plan." 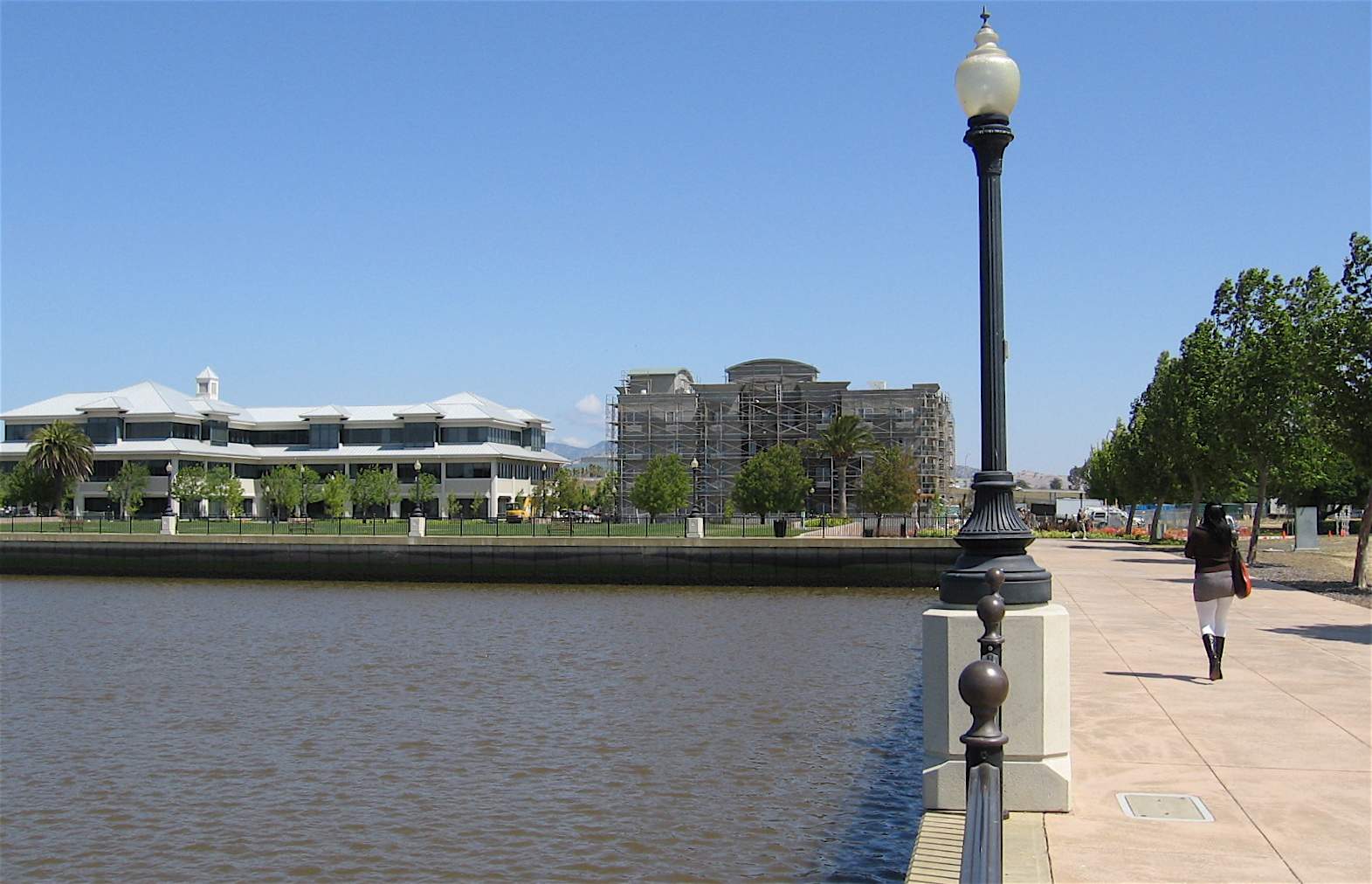 A 102-room motel (right) rises next to a new office building on the Suisun City waterfront.

Meantime, the city celebrates its successes in a down economy. The 102-room Hampton Inn & Suites  the city's first new motel in 50 years  is scheduled to open in September. The 40,000-square-foot Harbor Square development centered on a large courtyard is closing in on opening day and will feature a live music lounge, a bar and grill, an art gallery and offices.