You are here: Home » Articles » Football Island Offers Much too Much

Football Island Offers Much too Much

Just looking at the proposed football stadium on the eastern edge of Los Angeles County is enough to give me indigestion. This six-dollar hamburger is just too big to eat.

Even by the high standards for excess in Southern California, the numbers for this project seem overly rich. The 562-acre complex will contain (take a deep breath) a 75,000-seat stadium, expandable to 80,000 seats in the event of a Super Bowl. That stadium will be big-and-bad enough to satisfy the National Football League, which demands a Brobdignagian sports facility as the price of doing business in pro football. Add 833,000 square feet of retail space, or twice the size of two smallish regional malls, and another 162,000 square feet of restaurants to serve up enough chicken tenders, Philly cheese steaks and spaghetti marinara to satisfy the hunger of the football faithful. Add to this development goulash a 5,000-seat theater, plus 1,200 cinema seats, plus 1.5 million square feet of office space in an industrial area with little or no demand for such space. All this for a mere $800 million. 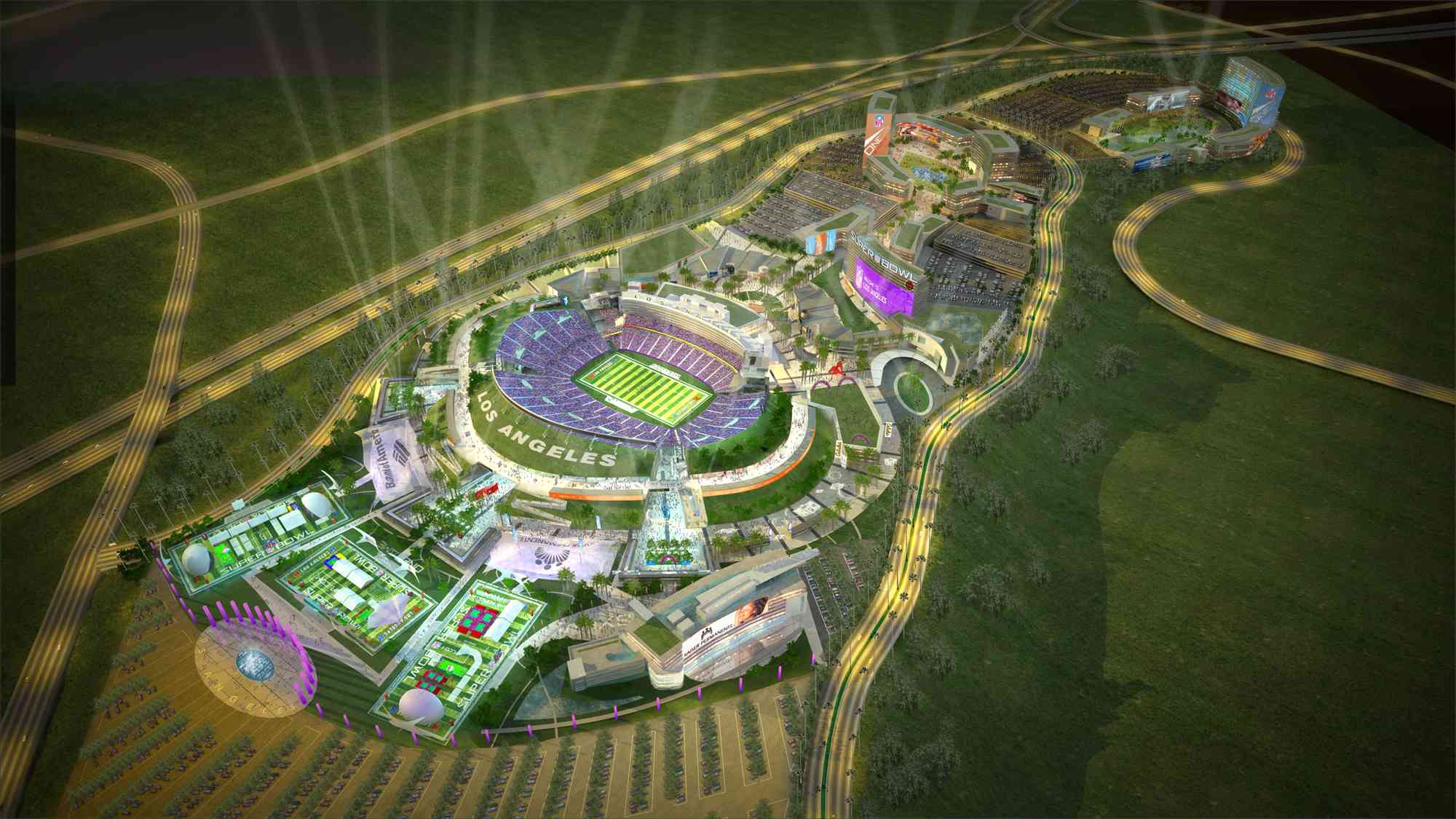 If you like the tenant mix, you'll the love the urbanism: The developer, Ed Roski Jr., has sited his dream child in the City of Industry, a city made up almost entirely of warehouses and loading docks, the majority of which have been built by Roski himself.
In other words, this NFL project  let us call it Roski Island  is to be an isolated megastructure amid a tangled skein of freeways and windowless industrial boxes. The project website describes Roski Island as one of a variety of regional attractions, such as Disneyland and Knott's Berry Farm, that will entice tourists. Believe me, 833,000 square feet of retail wrapped around a football stadium is the first thing I want to see when I get off the plane after a long week in Kuala Lumpur. 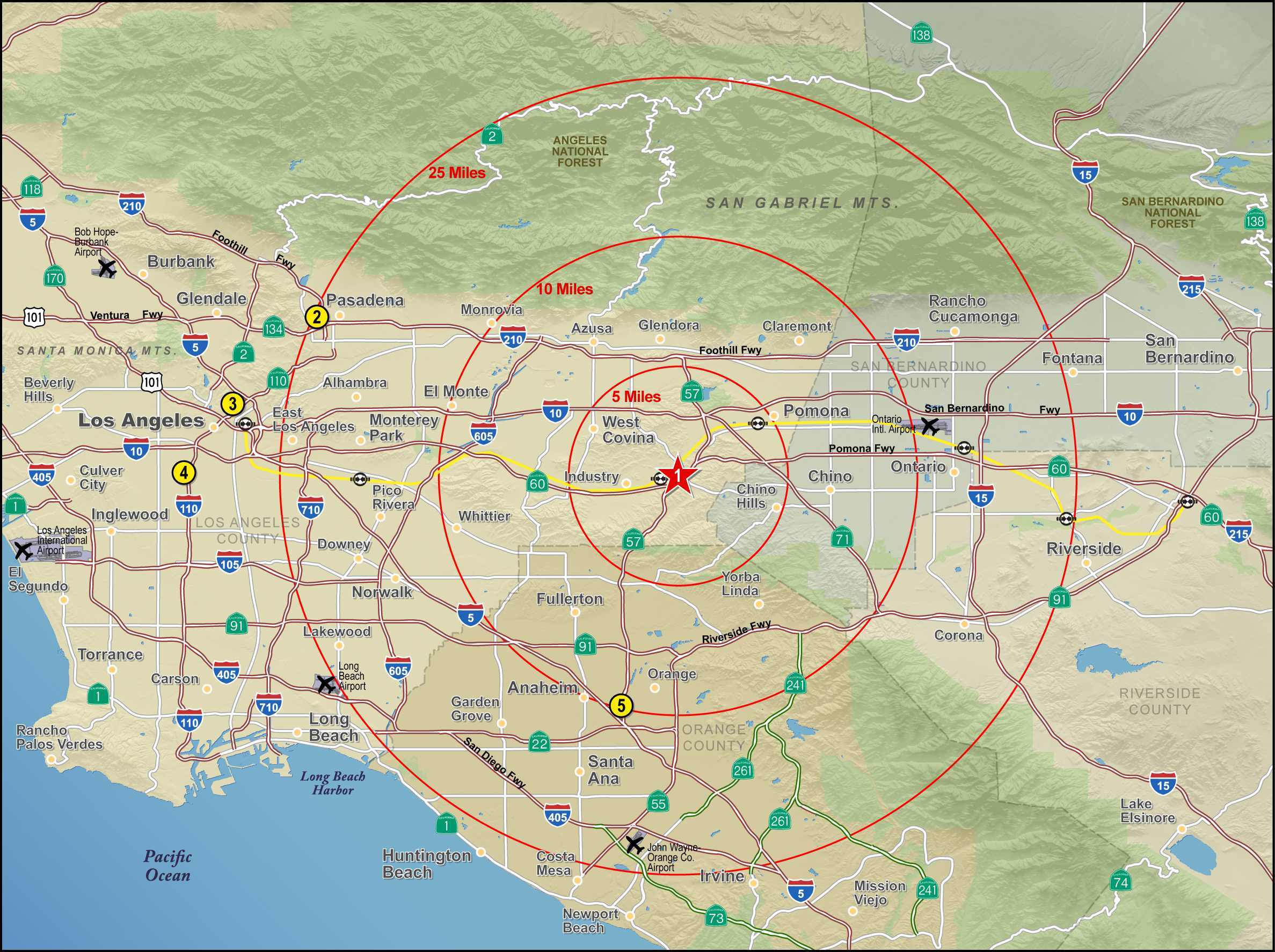 In fairness, Roski and his development partners, including sports and entertainment magnate Philip Anschutz, have already tried and failed to sell the City of Los Angeles on the notion of a football stadium in or near downtown Los Angeles, either at the antiquated Los Angeles Memorial Coliseum or on a separate site near the Los Angeles Convention Center that was quickly hooted down. One can hardly blame Roski for turning back to Industry, the town where he made his fortune, as the next logical venue for an NFL ball field. Site assembly, an enormous issue for a football stadium in downtown L.A., is not a concern in Industry, where Roski's Majestic Reality has a 65-year lease on the project site. Pulling a building permit would probably not be a problem for Industry's favorite son, either, even for a project big enough for Pecos Bill to lose Babe the Blue Ox in.

Ribbing aside, Roski and his team actually have at least one interesting idea, which is to excavate deeply into the site, and make the football stadium essentially a crater-like opening in the ground. This stratagem would save money on steel. The bermed stadium would also save millions of dollars in heating and cooling costs, because the temperature of the soil almost anywhere in the temperate zone is 55 degrees Fahrenheit. A partially under-grounded stadium is a notion worth exploring.

But the questionable urbanism of the scheme is its undoing, in my opinion. Sports and entertainment complexes need thousands of pairs of feet to succeed. Foot traffic is why stadiums thrive in many downtown areas; Baltimore, Denver, and San Diego are among the most frequently cited. Industry, however, is a gigantic business park that has no previous history of being a shopping or sports destination. It is difficult to imagine Southern California residents piling in the car on a regular basis to go shopping in the heat sink and smoggy air of Industry, no matter how cool the crater. 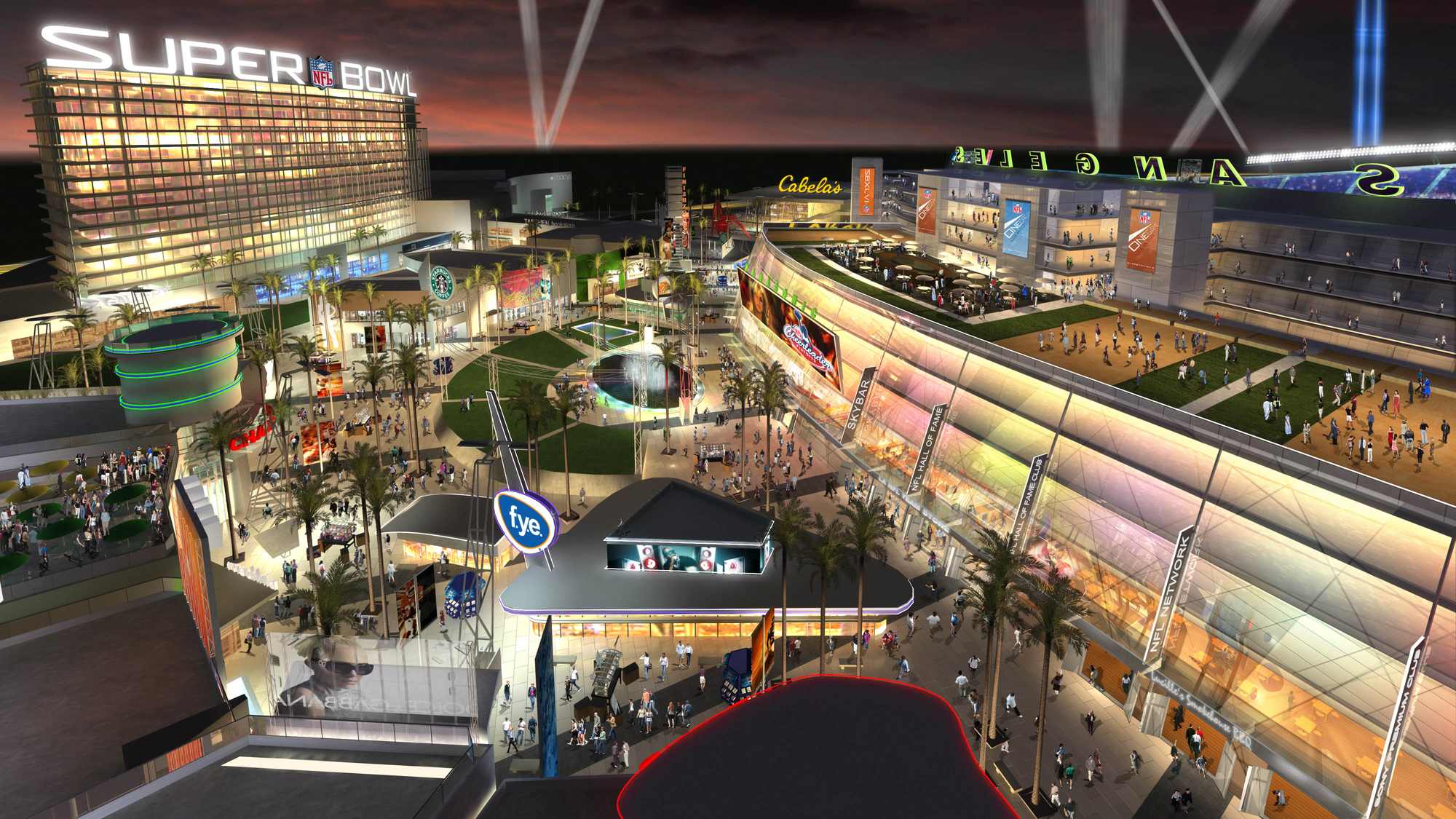 The second and third problems are economic and geographic, and they are intertwined. The absurd economics of pro sports has skewed the pricing of such events sharply toward the upper middle class. While the location in east L.A. County offers excellent access to some folks in neighboring Orange and Riverside counties  12 million people within a 25-mile radius, according to the project website  it's questionable whether that location serves the affluent folks in West Los Angeles, Santa Monica and Beverly Hills who are mostly likely to drop a few grand for season tickets to watch the Los Angeles Captains of Industry toss the pigskin around.

When the project website talks about Roski Island being a regional attraction on the scale of Disneyland and Universal Studios, we realize that the developers are stuck in the 1960s, when it was still possible to hop into a Corvette and race across town. Those days are over. Driving in Southern California is misery, and entertainment is increasingly localized. Yes, football may induce people to drive long distances, but the other 350 days each year of concert-going and shopping look very dicey to me  particularly when venues offering the same fare already exist in Hollywood, Universal City, downtown L.A. and perhaps a dozen other places in the region.

Roski and Anschutz state that Los Angeles is hungry for pro football after 14 years of living without. They may be right, although L.A., despite its wealth and history of winning teams, tends to be a dispassionate sports market, perhaps because nobody in Los Angeles really wants to admit that they actually live here. And that indifference suggests that driving out of town for a nominally L.A. team may or may not work. Those kinds of questions are for wiser heads to answer.

For the time being, I would simply advise Roski and his friends to keep the berms but look closer to the Westside. There's an empty basketball stadium in Inglewood, where the Lakers used to play before they moved downtown into an arena that Roski and Anschutz built. That might be a good place to start. And, if my favorite billionaires wouldn't mind some further advice, I recommend going easy on the food-and-retail bit. In this town, football itself is hard enough to swallow.